A version of this was published in The Santa Fe New Mexican
August 21, 2009

Did the blues spring from the stomp dances of southeastern American Indian tribes — runaway slaves taking refuge in nearby tribal communities and finding kinship in the Indian drums?

I’m not sure what ethnomusicologists would say about that theory, which is suggested by Canadian television producer Elaine Bomberry in the liner notes of the new three-disc compilation Indian Rezervation Blues and More.
But you can’t argue with the spiritual connections alluded to by musician Murray Porter in an interview in one of the bonus video features in the collection. Porter talks about growing up on the Six Nations Reservation in Canada and discovering B.B. King’s “The Thrill Is Gone” on late-night radio. “Something about it just grabbed me by the soul,” Porter says. “This is my calling.”
Indian Rezervation Blues isn’t a pure blues collection. In the 48 tracks you’ll hear some country, pop, hip-hop, spoken word, a little Christian rock (that’s The Plateros from Tohajiilee, New Mexico — they worship Jesus, but they also think very highly of Stevie Ray Vaughn), and lots of traditional-sounding Native music.
But the blues permeates the music here, snaking its way through these songs.
I was happy to find several New Mexico artists among the contributors. Besides The Plateros, there are A. Paul Ortega from Mescalero; poet Alex Jacobs; actor/Santa Fe gallerist/ blues harpist Gary Farmer with his band The Troublemakers; and part-time New Mexico resident Joy Harjo.
Here are some of my favorite selections from the compilation. 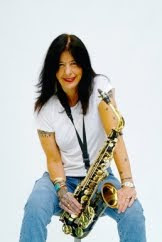 * “Witchi Tai To” by Joy Harjo. This is a fascinating reworking of a tune I first heard by the old hippie folk duo Brewer & Shipley (who were most famous for the cannabis-themed country-rocker “One Toke Over the Line”). B & S got the song from American Indian sax man Jim Pepper, who adapted it from a peyote chant. Harjo, a poet who plays sax, recorded this for her 2008 album Winding Through the Milky Way. She plays with the melody, turning it to a minor key and adding new lyrics.
* “Trail of Tears” by Wayne Lavallee. Here is bluegrass with a bite, featuring banjo, dobro, and heavy drums. I bet Steve Earle wishes he wrote this song.
* “Kokopelli Blues” by Keith Secola. Secola, whose song “Indian Cars” (which appeared with various titles in various versions) is a Native rock classic, has several songs on this collection. The best is this one, a beatnik jazz jaunt (the melody is a little like “Stray Cat Strut”) about New Agers and others ripping off Indian culture to sell products.
* “God and the Devil” by Jacques & The Shakey Boys. I had to double-check to make sure this group wasn’t from Louisiana. But no, Jacques Nadjiwon is from Canada and has French and Indian blood. This is what Cajun music would have sounded like had the Cajuns stayed in Canada.
* “Bushman’s Blues” by Art Napoleon. This is a happy-sounding fiddle blues number by a Canadian that also has what sounds like Cajun overtones. I also like Napoleon’s “Hunting Chant” on this album. It combines Native chants with guitar.
* “Indian List” by Alex Jacobs. This is a spoken-word piece in which Jacobs recites a number of racial slurs and nicknames for Indians and phrases applied to Natives. He then follows that with a list of names Indians call themselves, some of which are nearly as derogatory as the names on the first list.
* “Chicago” by A. Paul Ortega. Centuries ago, someone wrote a song that came to be known as “The Unfortunate Rake” about a man dying in the street from venereal disease. After this song got to America, it was turned into a cowboy tune called “The Streets of Laredo,” and somehow mutated into “St. James Infirmary,” “Dying Crapshooter Blues,” and other variations. In this song, Ortega transforms the doomed cowboy of Laredo into a dying Indian wrapped in white linen and turns the song into a lament for urban Indians cut off from their roots. 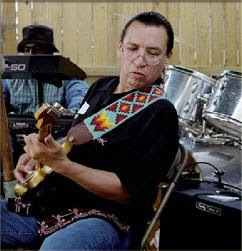 * “Redman” by Slidin’ Clyde Roulette. It’s just a good old stompin’ blues featuring slide guitar and harmonica. It gets extra points because “Slidin’ Clyde Roulette” is one of the coolest stage names I’ve heard in a long time.
* “Stripped Me Naked” by Gary Farmer & The Troublemakers. This is an old John Lee Hooker song adapted by Farmer and his band. When Farmer bellows “That was a mean old judge,” he sounds like he means it.

* “It Was in the Old Times” by Butch Mudbone. This is one of the best tunes that combines traditional chants with bluesy rock.