A version of this was published in The Santa Fe New Mexican
November 20, 2009

Here are a couple of recent albums from classic rockers from influential bands — Creedence Clearwater Revival and The Band — whose music was always an extension of American roots music — blues, R & B, rockabilly, gospel, and straight-up hillbilly sounds.

Even though their latest works won’t be and shouldn’t be considered breakthroughs or high-water marks of either artists’ career, John Fogerty’s The Blue Ridge Rangers Rides Again and Levon Helm’s Electric Dirt are records that show each artist remaining true to his muse. And both albums are full of good-time, honky-tonkin’ fun.

First, the Fogerty album: When Creedence — for my money, the best singles-oriented band of the late ’60s — crumbled in the early-’70s, Fogerty regrouped by degrouping. That is, he went into the studio basically as a one-man band, The Blue Ridge Rangers, playing all the instruments himself on a salute to his favorite country and bluegrass music.

The result was an album called The Blue Ridge Rangers, which featured covers: Hank Williams’ “Jambalaya (On the Bayou)”; “Today I Started Loving You Again” by Merle Haggard; Jimmie Rodgers’ “California Blues (Blue Yodel #4)”; George Jones’ “She Thinks I Still Care”; “I Ain’t Never” by Mel Tillis; and others. That he did not release the album under his own name could be one reason why sales tanked and the record was largely forgotten. (Historical footnote: In that same golden year of 1973, rocker Leon Russell released Hank Wilson’s Back — consisting of country and bluegrass covers and released under a pseudonym. For some reason, Hank Wilson got far more attention than Fogerty’s record did.)
I’m not sure what prompted Fogerty to revive The Blue Ridge Rangers after 36 years — except, perhaps, that he still loves this music. This time, however, he hired other musicians to handle fiddle, steel, drums, bass, mandolin, background vocals, and whatever was needed. And, for better or for worse, he even brought in some superstar guest vocalists.
The new Rangers tackle some of the classics — Ray Price’s “Fallin’, Fallin’, Fallin’” and “I’ll Be There,” which, for the record, is my favorite song on this album; Buck Owens’ “I Don’t Care (Just As Long As You Love Me)”; the Everly Brothers’ “When Will I Be Loved,” a spirited duet with Bruce Springsteen; and “Heaven’s Just a Sin Away” by the near-forgotten ’70s country duo The Kendalls.
One of the strangest tunes here is “Moody River,” a dark tale of suicide and betrayal written and originally recorded by a rockabilly dude named Gary Bruce (released under the name Chase Webster) but best known in the early ’60s version by Pat Boone (!). And there’s a cool countrified take on Jumpin’ Gene Simmons’ R & B novelty song “Haunted House.” This is fun, though my favorite remains the one by Sam the Sham & The Pharaohs.
For this album, Fogerty turned to several singer-songwriters of the ’70s. There’s a solid bluegrassy take on John Prine’s “Paradise,” and as far as “Back Home Again” goes, let’s just say this version is better than John Denver’s.
But the Denver song isn’t the worst of it. That would be Rick Nelson’s hit “Garden Party.” The song was a self-pitying account of Nelson getting booed at a 1971 rock ’n’ roll revival show at Madison Square Garden. It’s not a bad song, and I always love Tom Brumley’s steel guitar. But I’m not sure what drove me nuts more, the “oblique” but obvious lyrics (“Yoko brought her walrus” — was that secret code or something?) or the pop-psych Me Generation refrain, “You can’t please everyone, so you’ve got to please yourself.”
To add insult to injury, Fogerty brings in two members of the smarmiest band in the world, The Eagles — not only for background vocals but to sing lead on a couple of verses. I hope they’re all pleased with themselves.
But there’s another early-’70s countryish pop hit on which Fogerty shines. That’s Delaney & Bonnie’s “Never Ending Song of Love.” With Jodie Kennedy and Herb Pederson singing background, Greg Leisz on steel, and Jason Mowery on fiddle, it’s country music at its best. 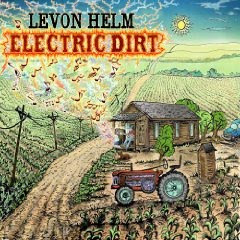 As for the Helm album, when I first heard he was doing a record called Electric Dirt, I was afraid it might have versions of the songs from his previous record, Dirt Farmer, done with psychedelic wah-wah guitars and over-miked drums. Fortunately, my fear was for naught.

This album, like Fogerty’s, consists mostly of down-home cover tunes — in a sound remaining true to The Band.

There are fewer traditional folk numbers than there were on Dirt Farmer. Helm branches out with a couple of Muddy Waters songs (“Stuff You Gotta Watch” and “You Can’t Lose What You Ain’t Never Had”); a cool, clunky Grateful Dead tune (“Tennessee Jed”); and a cover of “I Wish I Knew How It Would Feel to Be Free,” a song best known in the Nina Simone version, here featuring some funky New Orleans horns arranged by Allen Toussaint, an old ally of The Band. Helm does a tasty cover of Randy Newman’s “Kingfish,” again aided by Toussaint. But without the context found in Newman’s Good Old Boys album, in which the character of Louisiana Gov. Huey Long is a major theme, listeners unfamiliar with the song might wonder why Helm seems to hate the “Frenchmen” in New Orleans.

But my favorite on this album is the Pops Staples gospel song “Move Along Train.” Helms’ daughter Amy plays the role of Pops’ daughter Mavis.