A version of this was published in The Santa Fe New Mexican
April 16, 2010

Former Billy Childish protégé Holly Golightly Smith continues her funky backwoods explorations on Medicine County, the third and latest album credited to Holly Golightly & The Brokeoffs. The other half of this band is her longtime collaborator, Texas-born “Lawyer Dave” Drake.

Golightly, for the benefit of newcomers, was an original member of Thee Headcoatees, a garage-rock girl group that sprang from Childish’s band of the moment, Thee Headcoats, in the early 1990s. She has operated as a solo act since the mid-1990s, and she’s sung on tunes by The White Stripes, Rocket From the Crypt, Hipbone Slim & The Knee Tremblers, and others. She also did a tune in Jim Jarmusch’s 2005 movie, Broken Flowers.
Though she was born in England, Golightly now lives on a farm outside Athens, Georgia, with Lawyer Dave. This undoubtedly contributes to the rural vibe of her recent work.
This is The Brokeoffs’ third album, following Dirt Don’t Hurt (2008) and You Can’t Buy a Gun When You’re Crying (2007). It has a slightly more diverse sound than those previous records. It starts off with a twangy, exotic tune called “Forget It” that features a piercing organ. It’s not hard imagining the Cambodian/American psychedelic surf band Dengue Fever performing this one. It’s jarring but alluring.
But Holly and Dave are back on more familiar ground on the next song, “Two Left Feet.” No, it’s not the Richard Thompson song of the same name. This is a lazy, loping stomper featuring a nasty slide-guitar lick.
The next couple of tunes — the title song and “I Can’t Lose” — are fine hoedown numbers. The latter in particular is tasty. The screechy fiddle sounds as if it’s straight out of The Holy Modal Rounders. This leads to “Murder in My Mind,” a song written by British New Waver Wreckless Eric. It has a “Louie Louie”-type chord pattern that can be seen as a nod to Golightly’s garage roots. She and Lawyer Dave trade off on verses with lyrics like “One day they’ll find you hangin’ from a tree/or lyin’ in an alley with a knife stickin’ out of your spleen.”
Speaking of blood and guts, these two apparently have been listening to old Tex Ritter records. Ritter’s signature tune, “Blood on the Saddle,” appears here as a loopy waltz with Oregon singer Tom Heinl providing the frog-throated spoken-word section at the end of the tune.
The Brokeoffs also cover “Jack O’ Diamonds” (which Ritter recorded as “Rye Whiskey”). Holly and Dave do it as a sinister-sounding minor-key tune with fiddle and banjos.
While most of the tunes here are originals or traditional songs, Heinl wrote one of the most fun songs here, “Escalator.” It’s a clunky little tune about a guy, perhaps a child, who fears escalators. “Escalator, you won’t eat me/With your big rubber tongue and your shiny teeth,” Lawyer Dave sings. The narrator gets so riled up and fearful that he ends up hiding in a rack of nightgowns.
The prettiest song on Medicine County is “Dearly Departed.” The opening guitar strums remind me of the beginning of Waylon Jennings’ “Dreaming My Dreams With You.” Golightly sings it soft and somber. Somebody’s playing a church organ in the background, which gives the song an otherworldly feel.
Meanwhile, the song “Don’t Fail Me Now,” with its feedback and tortured electric guitar, sounds like it’s champing at the bit to break out into a crazy rocker. They keep it restrained, but the tension adds some dimension.
Also recommended:
* Under Construction by The Del-Lords. After 20 years or so, the mighty Del-Lords are back, with a way-too-short but very tantalizing EP. 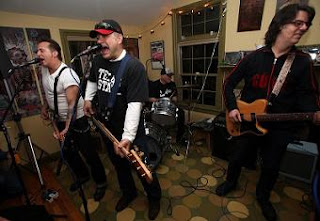 In case you missed its original run (circa 1984-1991), this New York band was led by Scott “Top Ten” Kempner, formerly of The Dictators, and Eric “Roscoe” Ambel, an original member of Joan Jett & the Blackhearts. (In more recent years, Ambel has played guitar in Steve Earle’s band and in his own group, The Yayhoos.
Although urban, the Del-Lords did credible covers of “Folsom Prison Blues” and the best version ever of Blind Alfred Reed’s “How Can a Poor Man Stand Such Times and Live?”)
The boys still sound in fine form on the five songs here, from the opening rocker, “When the Drugs Kick In” — “I was right in the middle of a big idea (when the drugs kicked, when the drugs kicked in)/I forgot everything right there and then (when the drugs kicked, when the drugs kicked in) — to the last track, a pretty Kempner ballad called “All of My Life.”
My favorite here is “Me & the Lord Blues,” sung by Ambel and featuring a crazy, raunchy guitar hook. This might be seen as a modern rewrite of the Blind Alfred tune the Del-Lords did so well: “I woke up this morning, and I says to God/‘I know you’re gonna hit me if you’re gonna hit me/but do you have to hit so hard?’/No food upon my table, too much on my plate … please tell me, Lord, it’s all a mistake.”
These songs are just enough to make a Del-Lords fan hope for a new full-fledged album.
Under Construction is available only at the Del-Lords’ Web site, www.del-lords.com.
0
Shares