A version of this was published in The Santa Fe New Mexican
August 12, 2011

Many of us — fans and critics alike — have groaned for decades about the fact that the music the general public calls “country” has grown more slick and corporate. At the same time, the blues has lost much of its original gutbucket raunch, becoming smoother, safer, and mainstream-friendly.

One natural antidote to the corporatization of American roots music has come from country punks and blues punks. Call it “roots punk.” Various strains of it have been around for years and years. The term “cowpunk,” for instance, has been around since the late 1970s. The Cramps deserve a big hunk of credit for this. And people have been calling The Gun Club “punk blues” since its first album, Fire of Love, was released in 1981.

Besides The Gun Club, this crazy trail was blazed by pioneers like The Meat Puppets, Jason & The Scorchers, Flat Duo Jets, The Jon Spencer Blues Explosion, The Gories, and many others.

My favorite paradox of roots punk is that while it was healthily irreverent, playing upon and making fun of the negative stereotypes associated with country and blues, it seemed far less “sacrilegious” than most of the “country” and most of the “blues” that you hear on commercial radio or see on television.

Punk country and blues are still rocking the juke joints and honky-tonks of the underground, judging by a couple of recent records out of Europe from bands that take the raw, primitive essence of American music — one a “country” band of sorts, the other a “blues” unit — and spit it out with a little punk fire and good-time slop.

* They Called Us Country by DM Bob & The Deficits. Robert Tooke, aka DM Bob, is an American, a native of Louisiana. I’m not sure why, but he immigrated to Germany years ago. (The “DM” stands for Deutsche mark.)

He formed The Deficits in the mid-’90s. The band lasted until about 2002. It was a trio that included DM on guitar and vocals, a woman named Reinhardt — reportedly the grand-niece of Gypsy-jazz great Django Reinhardt — on slide guitar, and a drummer named Tank Top.

It sounds like a close relative of “Dang Me.” In fact, I assumed it was an obscure Roger Miller tune until I checked the credits and learned that it was written by Lee Hazlewood. It was originally recorded by an Oklahoma country singer named Sanford Clark in the 1960s, and his version sounds like Miller too.

Hazlewood, who wrote “These Boots Are Made for Walkin’ ” and most of Nancy Sinatra’s other hits, is also responsible for another song on this album, “Dark in My Heart.”

Another songwriter is represented by two songs on this album. Glen Sherley is best known for writing the song “Greystone Chapel” for Johnny Cash’s classic At Folsom Prison album. At the time Cash recorded it, Sherley was in the audience serving time for armed robbery. (He recorded an album while still in prison and later toured with Cash after his release. But, ultimately, music didn’t provide salvation. Sherley committed suicide in 1978.)

The Deficits cover Sherley’s “(Step Right This Way) I’m Your Man,” a joyful little love song. But even better is “FBI Top 10,” a crime song about a sexy fugitive. “She’s free to kiss but she heads the list of the FBI’s Top 10.”

DM and pals do a sweet, harmonica-honking take on Buck Owens’ “Yearn ’n Burn ’n Heart.” And they do a surprisingly good country version of Lou Reed’s “Satellite of Love.” I’ll bet the legendarily cranky Reed would chuckle if he heard this.

After The Deficits, DM Bob went on to play drums with the Watzloves, a fun German group that specializes in trashy Cajun-flavored tunes. They Call Us Country, however, shows why DM needs to be in the forefront of a band.

* Boogie the Church Down by The Juke Joint Pimps featuring The Gospel Pimps. Don’t be confused. This is only one band, a dynamic duo from Cologne, Germany, featuring singer/guitarist T-Man and drummer/harmonica man Mighty Mike. The title of the album is a play on the title of their 2008 debut, Boogie the House Down Juke Joint Style. 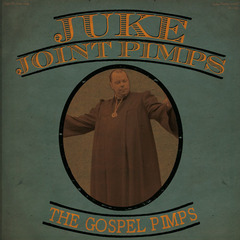 As the title implies, many of the songs on this new album have elements of old-time gospel music. In the title track, T-Man imitates an old-time preacher. “I want to make love,” he says, “and I’m gonna make love to all you sisters!”

One of my favorite songs here is “Sweetest Hymns,” which has a sound similar to another song by a punk blues duo, “Stack Shot Bill The Black Keys. In the grand rock ’n’ roll tradition of self-referential songs (going back at least to “Hey, Hey, We’re the Monkeys”), the Pimps sing,

“The angels have the greatest sound / But they don’t play it down in the ground. …The angels singin’ the sweetest hymns / But I prefer the Juke Joint Pimps.”

Not all the tracks have gospel overtones. “I Feel Guilty” sounds like it’s built around a stray Howlin’ Wolf riff. At the end of each line, a background chorus does an eerie falsetto moan that sounds like a police siren.

When I reviewed the group’s first album, I noted that blues purists “undoubtedly will turn up their snoots.” That goes double for gospel purists with the new album. In fact, if these guys weren’t so far below the radar of popular consciousness, this blasphemous boogie would probably spark a few (literal) bonfires from religious groups.

But like I said about the earlier work, this music has spirit.