“Tempest” and Beyond: A Guitarist Reflects on Dylan’s Modern Old-time Sound

I’m a big Bob Dylan fan and would be remiss if I didn’t devote some space to his latest studio album, Tempest. That said, plenty of intellectual energy has already been spent dissecting the lyrical content of the disc; I really don’t have anything new or innovative to add. Moreover, I’m the proprietor of a guitar-themed blog. I thought it would be more appropriate to offer my guitarist’s assessment of Dylan’s musical backing on Tempest, particularly by comparison to the rest of his output over the past decade.

Musically, the album continues a vision that began with Time Out of Mind and reached its stride on Love and Theft. Much to the chagrin of folk-era devotees who still haven’t recovered from Newport, Dylan’s 21st century sound has been a Dixieland collision of Highway 61 Revisited meets Nashville Skyline — electrified bands augmented by a healthy dose of 1920s and 30s acoustic Americana. While the sound is more polished than his historical output (owing equal parts to better production technology and seasoned backing musicians), it is also more varied, blending equal parts blues, folk, country, and even jazz — often all in the same tune.

I note this sound reached its stride with Love and Theft, an album I still consider to be Dylan’s post-2000 high water mark (both lyrically and musically). The band included Larry Campbell and Charlie Sexton on guitars. Campbell in particular is one of my favorite sidemen; he delivers tasteful accompaniment on just about any stringed instrument including guitar, fiddle, mandolin, and pedal steel. He has been responsible for great arrangements not only on Dylan’s album, but those of other Americana luminaries like Levon Helm, Willie Nelson, and Elvis Costello. I saw Dylan on the Love and Theft tour in 2002, and the show remains among my top three memorable concert experiences.

Dylan parted ways with the Love and Theft band before recording Modern Times in 2006. I’ve been to three more Dylan shows since, and unfortunately none quite lived up to what I saw in 2002. This is no doubt partly attributable to Dylan’s own mercurial nature and penchant for onstage experimentation. However, I also feel it has been because he lacks a strong musical foil to keep those tendencies in check and steady the ship. Both Campbell and Sexton – strong yet understated personalities in their own right – played vocal as well as musical roles in the Love and Theft band, helping to maintain consistency and allow the melodic and harmonic foundations of the tunes to cut through Dylan’s sometimes meandering vocal delivery. By the group chorus of “Blowing in the Wind,” I knew I was hearing the classic tune, even if it hadn’t been immediately evident from Dylan’s solo verses. 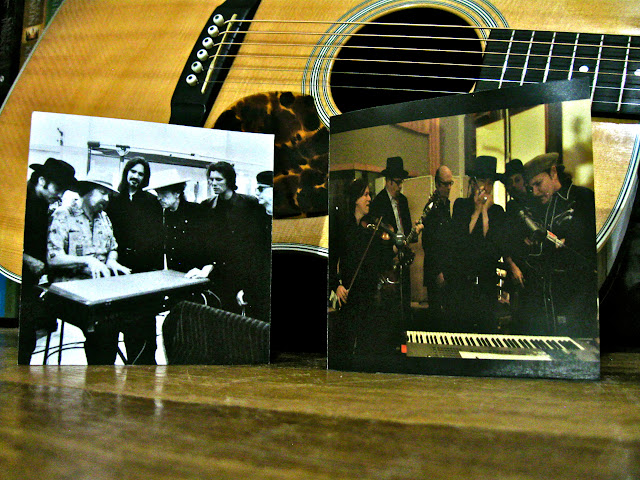 Modern Times largely followed the same musical template as Love and Theft, and perhaps because of that it was doomed to underwhelm this reviewer. It’s not that the album was bad; it just didn’t quite live up to its predecessor, despite (and probably because of) the aesthetic similarities. Stu Kimball and Denny Freeman assumed guitar duties. Both are highly capable six-stringers, but in my opinion didn’t provide as steady a musical keel for their bandleader — at least initially. Together through Life (2009) brought a more marked shift in the band’s sound, yielding a record that made a more clean break from the Love and Theft template. Kimball was joined by David Hidalgo (Los Lobos) and Mike Campbell (Tom Petty and the Heartbreakers); the three guitarists provided a solid foundation for nine tight, blues-oriented arrangements that suggested the gelling of a more confident and distinctive band. Which brings us to Tempest.

The Tempest studio band – which includes Kimball, Hidalgo, and the return of Charlie Sexton – very successfully splits the difference between Love and Theft and Together through Life. Dylan’s writing returns to classic form, propelled by bluesy rhythms that not only play to the guitarists’ strengths, but provide both momentum and direction for the songs. The rhythmic backing is tight, but rough enough around the edges to match Dylan’s dark, cantankerous, and occasionally crude lyrics. The three guitarists are a literal riff factory, from the screeching electric lick that drives “Narrow Way,” to the Muddy Waters inspired shuffle of “Early Roman Kings.” Some of the motifs are blues cliches; others are reminiscent of tracks from albums previously mentioned. They all borrow from American musical traditions that have always shamelessly recycled those elements that work, the sounds that get feet tapping and imprint melody and lyrics in listeners’ minds.

If any criticism can be leveled at the arrangements, it’s that it would have been nice to hear a little more from the band – particularly on the sprawling title track, which would have benefited from both a lyrical editor and more ambitious instrumental breaks. Production-wise, the mixing on a few tunes occasionally buries the lead instruments. Granted, the focus is supposed to be on Bob’s lyrics, but there’s some tasty playing that deserves an occasional spotlight.

I’m hoping the live act lives up to the promise of Tempest. While my last several Dylan concerts didn’t come close to the Love and Theft experience, I was struck by how much tighter the band sounded in each successive performance. Hopefully the new touring band will benefit from continuity in personnel, the influx of Charlie Sexton, and the energy from a new set of tunes (not to mention Mark Knopfler as co-headliner). Longer term, it’s clear there’s plenty of music left in Dylan, and I’ll be looking forward to the next iteration of his modern old-time sound.

*Correction — The guitarist on Love and Theft was of course Charlie Sexton, not Martin Sexton as written in the original posting.