Sunday Wilde’s voice is as raw and pure as the wilderness in which she lives. The Northern Ontario resident writes and sings a guttural blend of dirty blues and jazz that is compelling and vital, baring deep emotions to the light in songs that imprint themselves on your soul. Wilde’s third album, What Man!? Oh That Man!!! covers the range of human emotion and experience, traipsing through love, heartbreak and primal need as if the walls the separate these states of being are non-existent. With bass-work from Rockabilly Hall of Famer Ronnie Hayward and the phenomenal guitar work of David West to support her, Sunday Wilde lets loose on her piano and through her voice as if it’s the last thing she’ll ever do.

Wilde opens with “That Man Drives Me Mad”, a frenetic blues number driven by Wilde’s eclectic voice. Wilde belts, purrs and moans through a song about love-induced madness in her primal, scratchy voice. “Sunday’s Midnight Blues” documents the misgivings that can afflict us all in the small hours before dawn, and Wilde blows listeners out of the water with an impassioned vocal that’s part confession and part sensual growl. “Manning Street Sweet Talker” is an entertaining story song; universal in that everyone knows someone like the character documented here. Wilde tells the story with a finesse that is inborn, not learned. “My Baby’s Dead” is an entertaining number, steeped in the blues, that takes a somewhat unexpected turn. Wilde seems to live to confront listeners with the unexpected, and almost slips this one by.

“Don’t Bother Me” is a post-breakup reminder in song, full of sounds of frustration and perhaps even some dark humor. There are simply no boundaries for Wilde as a songwriter; emotions are born in their own distinctive forms, whether words, music or primal sounds. Wilde delivers on “Sorrowful Blues”, a gutsy vocal performance in a song full of mild innuendo and a wanton attitude about the world. The darkness here is born of having much attention from men, but not from the right one. Wilde’s performance is desperate and born of emptiness, but is delivered somehow with a wink and a smile. “Our Deal Is Done” is a pure heartbreaker, matter-of-fact yet loaded with emotion. “I Can’t Shake That Guy” is an entertaining relationship post-mortem; the contemplative process that leads up to Wilde’s shining moment. “Time To Say Goodbye” is a diva moment of sorts, with Wilde stripping things down into a torchy vocal performance that will stick in your mind and keep you coming back.

Sunday Wilde isn’t your father’s blues singer. Born of the wilds of the north, Wilde brings some of that primal feel to the songs on What Man!? Oh That Man!!! With a voice you will never forget, Wilde rips apart the fragile emotional wake of love from dawn to dusk, documenting each step to heartbreak and resignation across eleven emotionally and musically charged songs. Wilde displays a memorable voice, and a charisma that is nothing short of preternatural. Even if you don’t dig What Man!? Oh That Man!!! you will absolutely never forget it. 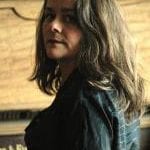 CD review: Sunday Wilde – He Gave Me a Blue Nightgown

Sunday Wilde: He Gave Me A Blue Nightgown