‘Small Town Talk’ by Barney Hoskyns is a love story. For Woodstock is not merely a town in upstate New York; here it is a living and breathing character brought to life. It has a personality of its own. It is organic. It grows, matures and changes with the different fashions and eras.

Bob Dylan once told Robert Shelton that Woodstock was ‘the greatest place’ and that “…we could stop the clouds, turn time back and inside out, make the sun turn on and off.”

This is what Hoskyns appears to have achieved in his well-written, detailed and warm biography of a remarkable place. He plays with time, drawing us backwards and forwards in a semi-linear style. The past and the present intertwine. The intriguing life stories and adventures of key players in the history of Woodstock are explored in the same way a tourist might wander off the beaten track on the lower slopes of Overlook Mountain; constantly winding upwards to the pinnacle for the overarching view, but with time to stop and absorb the details of the formative rock structures and the subtle changes in flora and fauna along the journey.

The good, the bad and the eccentric are treated with equal respect and an underlying fondness. Every player in the story has a perspective to be related. Every twist in the tale is driven by motive and opportunity, inspiration and artistry, power and money.

Describing itself in the blurb as, ‘a socio-cultural-musical history of the iconic upstate New York locale of Woodstock,’ Hoskyns’ book is primarily about the story of the Woodstock artistic community in the years following the arrival of Albert and Sally Grossman to Bearsville, but it is much more layered, nuanced and human than the by-line suggests. These are ‘magical times in a magical place’. Culture and history is being formed and influenced.

Artists, artisans, craftsmen, musicians, writers, photographers and poets are amongst those who have been drawn to Woodstock over the years. From the power of Overlook Mountain – with its spectacular views and talk of ancient burial grounds – to the Karma bka’ brgyud Tibetan Buddhist community, and the ‘new age’ dabblers who consider Woodstock to be located on a spiritually profound ley line; the creative, the artistic, the unconventional misfits, and the contemplative have all been moved to gather in the neighbourhood.

Contributors to Hoskyns’ book repeatedly talk of mystical creative vibrations, karma, and the sense of peace that people often find in Woodstock – which is precisely the escape and refreshment that the overloaded minds of stressed celebrity artists have been seeking in more recent times, away from the urban spotlight.

And yet, Woodstock is a place of contradictions that Hoskyns is determined to investigate.

In the book’s prologue, following the author’s failed attempts to contact Sally Grossman, and preceding a furtive drive past the ‘No Trespassing’ warnings for a foray along the driveway to catch a glimpse of the Grossman Bearsville property, Artie Traum tells Barney Hoskyns, “There’s a veil of secrecy around all this stuff,” adding, “But one of the whole things Dylan started was ‘Don’t talk to anybody.’”

It is a dissonance that anyone who has lived in a small town may understand. The halcyon outward appearance of tranquility and a close-knit community often conceals an undercurrent of scandal, resentment, old grudges, paranoia, and a desperate attempt by public figures to retain their privacy in an environment where everybody seems to know (or wants to know) everyone else’s business.

The book accurately reflects the contrast between the dark and light. The veneer of a gentle country idyll in the mountains, where people go to seek peace and inspiration, conceals a place with dark and shadowy corners. Drug use, substance abuse, prostitution, fear, distrust, and those gated, high-fenced, properties. Hoskyns mentions, for example, how Bob Dylan became less at ease in Woodstock over time, especially as news of the Charles Manson murders hit the international headlines. Being stalked up those lonely, dark mountain roads by fans willing to hide out in trees overlooking your private space. People invading your property and home, desperate to get some contact with the mysterious idol of the age. The tranquility of Woodstock was transitory. It had become the ‘place of chaos’ Dylan describes in Chronicles.

It is interesting that the generally more politically conservative population of a small and sleepy, somewhat cloistered, bolt-hole, has opened its arms over the years, and embraced the more liberal, bohemian, and outré of newcomers with (mostly) a modicum of grace and harmony — despite the occasional friction regarding public nudity and alcohol.

Even Bob Dylan fell into that contradictory area between progressive and conservative. Bruce Dorfman recounts to Hoskyns how in 1968, Dylan expressed support for George Wallace, the pro-segregation governor of Alabama who ran for president. As Dorfman puts it, “He was a small-town kid, and a lot of his thinking politically was quite conservative.” How serious was Dylan? Hoskyns adds a wry footnote. During his iconic photo session at Hi Lo Ha, Elliott Landy was told the same thing by Dylan, about supporting Wallace. When Landy later ran into Richard Manuel and asked whether Dylan was on the level, Richard is said to have replied with a chuckle, “I don’t know, you can never tell with Bob if he is serious or not.”

So were these opinions genuine or part of the Woodstock pastime of  building an image? Dorfman’s recollections are continued by Hoskyns.

Affectation or not, Dylan took his country-boy act to such an extreme that when he needed a new suit, he asked Dorfman to accompany him to Sears, Roebuck in Kingston. “He had this big truck, and he put Buster in the back,” Dorfman recalls. “At Sears he found a horrendous green suit with saddle-stitched collars and pockets. He thought it was terrific, and I don’t think he was making it up. Innocence gets shattered at some point, but then it comes right back again.” When Dylan showed the suit to Sara — who in her hippie-maternal way was quite chic — she smiled. “She said, ‘That’s a lovely suit, Bob,”” says Dorfman. She just tolerated this stuff in a bemused way. 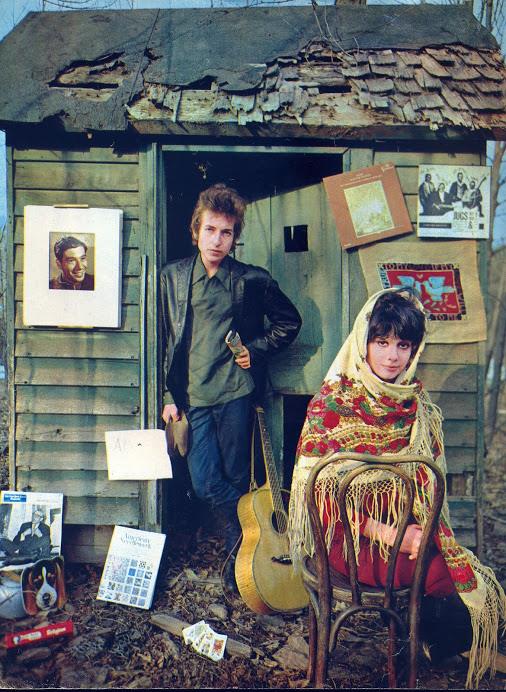 And then we see maybe the deepest irony of all: the men who forged the first semblance of the modern day incarnation of Woodstock were overtly anti-semitic. For example, Woodstock was a place where, in the opening years of the twentieth century, Ralph Radcliffe Whitehead had arrived looking for a sanctuary away from the Jewish migration to resorts in the Catskills. He might not have believed that six decades later, his son Peter Whitehead was the person who sold Bob Dylan Hi Lo Ha (without comment on a Whitehead selling Woodstock land and property to a Zimmerman – and it is hoped by Hoskyns that the son had evolved far enough from his father’s ‘ingrained prejudice’ for it not to have mattered or been an issue).

Indeed, it is maybe the most delicious incongruity that the modern phenomenon of the near mythical status of Woodstock in today’s culture, language and music, was brought about primarily by the power, influence, and vision of two Jewish men. 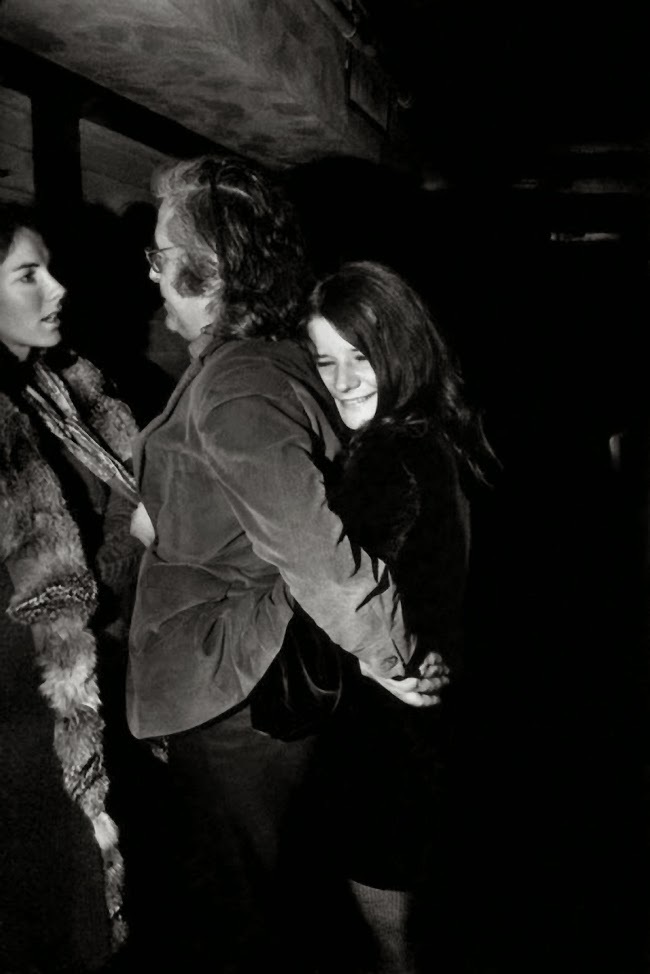 Janis Joplin (right) embraces her manager, Albert Grossman, at the press party for her signing with CBS, February 1968, New York City. Photograph by Elliott Landy.
There are countless others who have played significant roles in establishing and maintaining the reputation of the Woodstock area. The book is full to the brim with their stories, anecdotes and recollections – either from personal reminiscence, or through gathered writings and interviews.

And yet, Grossman and Dylan are the two pillars, the walls and roof of this modern history of Woodstock.

Hoskyns provides ample detail about Albert Grossman’s fascinating biography and influence. There are plenty of stories, anecdotes and facts to inform and entertain those interested in the background of Bob Dylan’s connection to Woodstock. In fact, Grossman and Dylan weave through every section of the book in one way or another. Sometimes solid entities with active roles, sometimes no more than smoke and mist curling around the legs of the players and silently pushing them forward.

Janis Joplin, The Band, a lovely insight into Levon Helm’s later years before his passing, Van Morrison, Todd Rundgren, Paul Butterfield, Jimi Hendrix… far too many iconic performers and celebrities are included in the book to be listed here. They explode into the narrative and then are gone, with their stories all interconnected.

And, of course, some pages are dedicated to that elephant in the room – the Woodstock music and arts festival, that “Aquarian Exposition: 3 Days of Peace & Music” which took place in August 1969. The book shows how Woodstock and ‘The Woodstock Festival’ are not synonymous in either spirit or in location (the festival being held 69 kilometres southwest of Woodstock, near White Lake, Bethel). In fact, for many people ‘The Woodstock Festival’ irreparably and negatively changed the town of Woodstock. Many shared Bob Dylan’s distaste for the idea, and it was unsurprising when Dylan himself opted to perform at the Isle of Wight festival in the UK in the summer of 1969, rather than attend the festivities in Bethel.

‘Small Town Talk’ includes 16 pages of black and white photographs that are unfortunately rather small and not always as clearly reproduced as one would like. However they do serve to illustrate much of the important historical content of the book.

With a solid bibliography, thorough notes on quotations and sources, and even a small playlist suggestion that takes any readers unfamiliar with the performers in the book on a musical tour of Woodstock from 1968 – 2010, this book is informative, entertaining and eminently readable.

Certainly, ‘Small Town Talk’ has neatly caught the significance, the atmosphere, the characters, and the social history of Woodstock. Although it is geared for the more general cultural and musical history enthusiast, and much of the information is covered in other books, this is a fine addition to the library of anyone interested in the music of Bob Dylan. It includes the stories of some of the people surrounding Dylan and working with him during the 1960s and early 1970s, with openness and touches of humour, offering more in content and approach than a standard celebrity biography.

THE READING ROOM: Books on Woodstock Artists to Bring You Back to the Garden