SPOTLIGHT: Samantha Crain on How Her Powerlifting Past Comes in Handy for Touring 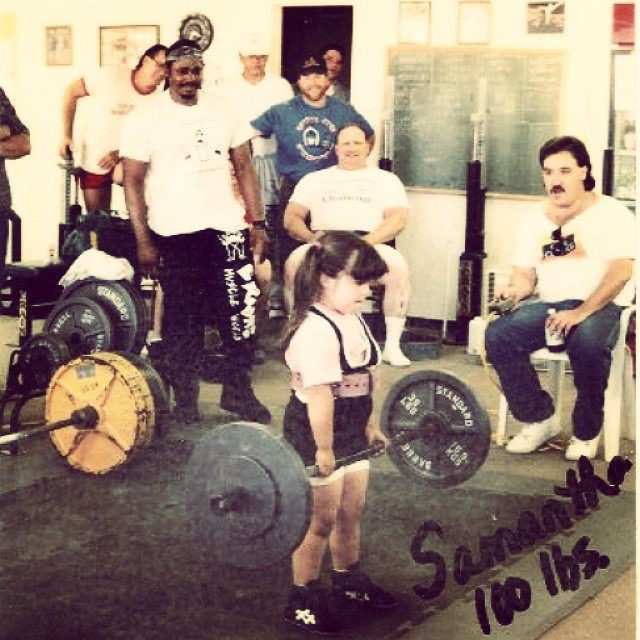 EDITOR’S NOTE: Samantha Crain is No Depression’s Spotlight artist for July 2020. Read more about Crain and her new album, A Small Death, in our feature story, and see a video of Crain playing her song “Holding to the Edge of Night” from home here.

Distance gives perspective. Is that the saying? Something about objectivity too, I think. I don’t remember. But that — all of that — is true. I’ve been a touring musician since I was 20 years old. I’m 33 now, nearly 34. I know all of that driving, waiting, drinking, transient, Janus-faced existence is different than “the usual” reality. I know this because of the frustrations I encounter absorbing back into any sort of routine when I come home for a time. I know this from the blinking stares of my lawyer friends when I say “load in” or “settle up” or “buy out.” That’s about right, actually. It’s always IN, UP, and OUT. So, the virus that shall not be named comes along and touring is paused. Well, everything is paused … but this is about touring. With all this time for thinking, reflecting, and brutally attempting, yet failing, to break the spell of nostalgia, I’ve circled back around to something deep-seated in myself. I’m remembering some very strange ways in which I was, more or less, prepped for this sort of work. Bear with me. It’s going to take a little explaining.

I was a child powerlifter. Yes. Do those words together mean anything to you? Have you seen those words side by side before? Child … powerlifter? I come from a family of legendary powerlifters. Hundreds of championship titles and records between all of us: my papa, my dad, my aunt, my uncle, my mom, my brother, myself. I’m not going to go into a history of the sport here, but, just for clarity’s sake, powerlifting is the rebellious offspring of weightlifting … the sport you see (or probably don’t see) in the Olympics. On the weekends, my family would pile into a 1991 Dodge van that had been converted into a sort of camper and drive to St. Louis or Houston or Dayton or wherever the meet (insider talk for “competition”) was that month. 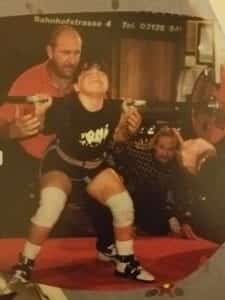 We’d stumble into whatever rundown Best Western conference room the director and his exhausted helpers were monopolizing that weekend with a makeshift platform surrounded by York cast iron barbell plates (not unlike the pre-show air of a bar gig with the sound engineer, bartenders, and doorperson all shuffling around). My mom would set up a table piled with powerlifting-related goods … knee wraps, singlets, chalk, supportive belts, T-shirts that said things like “The Strongest Shall Survive,” vitamins, how-to training books (I mean, come on … this was basically a merch table). And I would like to brag that our ragtag bunch were very early adopters of taking credit card payments with our click-clack machine that you would use to imprint the card onto carbon paper (Square payments circa 1995). We’d all take turns manning the table depending on which one of us was lifting that day.

And then, hoping that our daily training would be enough to invoke a performance that the judges would reward with white lights (white lights mean “good lift,” red lights mean “bad lift” … thank god there is no parallel to a live music concert here), we would psych ourselves up with smelling salts (this is as close to a metaphor of the liquid courage of whiskey before a show as I could come up with) and throw up a little prayer, giving it all we had. And then, the collapse. An entire day’s worth of energy expended in a burst of three intense hours (same feeling post-concert performance) had us crawling back to our motel room to watch In the Heat of the Night and binge Doritos (the similarities here are really indistinguishable).

Sometimes, we’d travel overseas to Germany or England for the big, important competitions, all of our gear and “merch” crammed into industrial strength duffel bags we’d have to check in for the hold, (You get it, now right? Still paying those nice oversize fees for Nord keyboards in flight cases.) My brother and I, wandering the streets of Blackpool alone, thought our prepubescent adopted Lancashire accents were actually passable (my bandmates in the UK do like to hear this born-and-bred Okie try and do some British slang for a laugh). That same trip, my dad went around a roundabout somewhere near Heathrow airport three times before he could successfully exit it (I have also, as an adult touring musician, somewhere near Heathrow airport, done this exact same thing).

I had my first crush on a real, non-Tiger Beat magazine foldout boy at a meet in Graz, Austria. His name was Pieter and he was on the South African teenage powerlifting team. We’d wave flirtatiously to each other from either side of the warm-up room behind the competition platform (this is basically what happens backstage at small music festivals) and, in the early days of the internet, I’d spend hours doing Yahoo searches for “pieter south africa” with no luck reconnecting.

Remember those blank stares from my lawyer friends when I talk touring musician lingo? Well, that reaction was entirely present in my youth as well when my teacher would make me hold up a copy of the Shawnee News Star and talk to my class about my tiny person accolades … except my lawyer friends think it’s cool that I’m a touring musician (so they are gracious with my tangents) but kids are not so forgiving, and, at that stage of life, anyone who is different is shunned (if you’re lucky) or bullied to the max. I was the unrefined receiver of both, with boys loving to test my strength with fights and girls calling me such lovely original names like Thunder Thighs (I believe we call that “thick” now, thank Jesus) and Arnold Schwarzenegger (Kindergarten Cop and Junior weren’t necessarily characters I wanted to align myself with as a preteen, although I would feel like a badass if someone gave me the nickname Terminator or Commando at this present time). And then, finally, there is the very obvious line drawn between my experience lifting heavy things as a competitive sport and my experience lifting heavy things in the form of a bass amp with no wheels up a flight of backstage stairs in the rain wearing very unreliable vintage cowboy boots.

During this great pause, I am missing my life on the road because, at this point, it is inherent within me, a part of my personality even. I mean, I’m gonna live, don’t worry, I have enough self-awareness to understand the littleness of this problem in 2020, but I have been asked to write an essay and this is what I came up with, dammit, so stay with me. I think I saw a tweet from Phoebe Bridgers about how she would give anything right now to play the grossest club with the worst sound … have to change in the bathroom after doors are open and get paid in a case of Lost Lake beer (I added that last part myself as a nod to the Conservatory, a bygone DIY club in Oklahoma City), and … I feel that. I’d give anything for that right now too.

I was a child powerlifter, and, in a lot of ways, that qualified me for my life as a touring musician. I wonder, with the future of travel and gathering in public places sort of up in the air, is there some other job or skill that I’ve unintentionally been primed for? Because I may need to pivot soon … at least until the venues and the borders open back up.