Sandwiched between the daily news of murder, mayhem, and politics, comes a media blitz and social network Bing! Bing! Bing! that Sony Music Entertainment will be releasing not one, not two, but three variations of the latest in Bob Dylan’s never-ending studio outakes excavation. The Cutting Edge 1965-1966: The Bootleg Series Volume 12 will be released on November 6, in the St. Nick of time for the holiday gift giving season.

To break it down: you’ve got your basic run-of-the-mill Deluxe Edition of six discs (or the digital equivalent), and a cheapo-cheapo two-disc “best of” variation that will also be offered on 180-gram pure, virginal, black-as-night vinyl. But the excitement really builds for the Collectors Edition Box Set pictured here, which gives you 16 alternate versions and four master track mixes of “Like A Rolling Stone,” along with multiple variations of a few dozen other songs that were originally rejected for one reason or another. Retail price: $599.99.

The Big Bambino of Bobby’s Box Sets will be peddled only via Dylan’s website, and it comes to mind that this investment opportunity — a keepsake for your family to both enjoy now and to pass down through generations — not only has the look and feel of one of those 1980s K-Tel Records’ AS SEEN ON TV commercials, but the ad copy sounds like it as well:

I have to admit, I’ve added the exclamation points for emphasis. But wait! There’s more! Buy now while supplies last, and you get these SPECIAL BONUS FEATURES!

Hotel room recordings from London, Glasgow and Denver!
The original nine mono 45 RPM singles released during the time period!
A leopard skin printed spindle! (Seriously … it’s just too good to make this stuff up.)
A strip of film cells from an original print of the Don’t Look Back film!

Perhaps for the uber-Dylan fanatic and completist — or a hedge fund manager who will buy everything under the sun simply because they can — spending well over $600 (there’s sales tax and shipping charges to be applied) might seem like an easy choice. For the rest of us who live in the real world, and have bought and owned at least six various configurations of every major album that Dylan has put out, it’s likely to not even make a blip on the radar screen of things we can’t live without.

Should you think I’m not a fan myself, you’d be wrong. My collection includes original mono recordings, stereo mixes, remasters, greatest hits, compilations, oddities, live shows, unauthorized vinyl, and countless books. At the moment I’m coming within striking distance of the final chapter of Elijah Wald’s Dylan Goes Electric, which I’ve found to be an exceptional read. When I’m in the mood for a little Dylan these days, it’s often the Bootleg Series that will draw me in, as I find most of the volumes to be a welcome and refreshing additive. But after last year’s six-disc Basement Tapes Complete, I’m just done. There isn’t enough time, interest, willpower, energy, or money to pay this release one iota of attention. (Except for this one rumination.)

Before I let you go, it seems that it might best to offer an opposing view. Here’s what Randy Lewis of the Los Angeles Times says about this project:

Record companies are often justly criticized for strip-mining their catalogs out of desperation for cash because it’s become so difficult to break new artists. This, however, appears to be an example of legitimate exploration of the context out of which three of rock music’s most important albums emerged a half century ago.

Stay tuned for a more in-depth report on this project.

As we eagerly await Randy’s further investigation, heed my advice and don’t fall for the hype. Neither Dylan nor Sony needs the dough. You can stream it for next to nothing, and box sets just add clutter to your home and get really dusty. If need be, I’d be willing to come over to your house, bring my guitar and harps, and personally perform the entire 1960s repertoire for you in exchange for a simple hot meal and travel expenses. Lucky you. 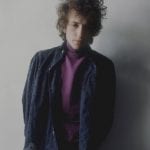 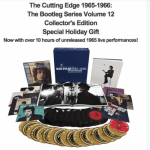