Sin City Spotlight: The LA Hootenanny
Don’t close up the honky-tonks just yet…


Take four guitars, electric bass, washtub bass, drums, piano, harmonica, fiddle, banjo and what do you get? Only some of the members of The LA Hootenanny, a collective of musicians that bring the Honky-tonk to the dark trenches of downtown Los Angeles every Thursday night at Villains Tavern.

Though The Hootenanny (or “Hoot” for short) looks and sounds like a band, the group pride themselves on their informal nature. In fact, they refer to their Thursday night gig as a “rehearsal” rather than a show. 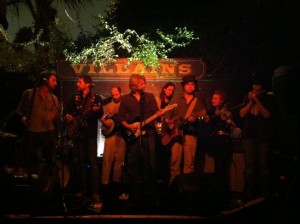 The revolving cast of players finds anywhere from ten to fourteen musicians at a time, crammed onto a tiny stage, playing everything from Johnny Cash to the Pixies to Snoop Dog. Still, despite various musical styles and backgrounds, the Hootenanny has grown to have a homogeneous sound, born partly out of cramped nature of their jam sessions. It may appear from the audience like an uncomfortable set up, but for members of the Hoot, it proves just the opposite.

“I like it personally because it’s comfortable. You can hear everybody. When we play bigger stages, because there’s so many of us, it feels like there’s separate bands,” said Banjo player, Tim LaLonde ($2 Bills). 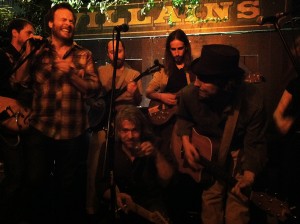 It may also help that members of the group freely walk on and off stage to refill drinks or smoke cigarettes. It’s a sort of drunken comradery that reminds one of the Christmas Eve scene in Heartworn Highways, where everyone’s in it to share, listen, have fun and fully test the limits of alcohol consumption and endurance. It ain’t always proficient, but it sure is pure-hearted.

“It’s always been about hanging out with a group of friends and it always rides the edge from completely awesome to falling apart. If it’s not fun, then fuck it,” said drummer Kevin McMullan ($2 Bills, Huntsville).

Watching the LA Hootenanny is more about the mood than it is the music. But as the whiskey flows and coherency fades, it seems the sound only gets better. Because, the key ingredient to the whole thing is letting loose and having fun. It’s Texas, very Texas.

“If you had to describe us as a sound, it would definitely be Texas Outlaw Country,” said McMullan. 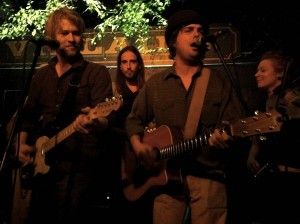 Of course, at its inception back in 2004, the LA Hootenanny began when a group of Texans bonded together to play Thursday nights at a little Cajun restaurant in Silverlake.

“I’m all for playing at a place with an upright piano and some kind of southern cuisine. Bringing people in and having that experience, Thursday nights is our thing wherever we’re at,” said guitarist/vocalist Todd Lowe (Pillbilly Knights).

Since the Hootenanny isn’t a real band per say, none of what they do is ego driven. They are a community of musicians, who take turns and support each other in a city that would generally seem an antagonist to such a thing.

“It’s a magic group of people. Everybody’s an inspiration. It’s a group of individuals. It’s noisy but it’s a lot of fun,” said McMullan.

Though for the most part, they play traditionals and covers, each member is given the opportunity to add their own unique flavor. For instance, Lowe (who also happens to be a cast member on the HBO series, True Blood), lends his cleverly titled originals, “Codependence Day” and the soulful, “Sloppy Second Street” to the set. But even so, the latter song leads into a countrified version of the Blondie classic, “Heart of Glass,” proving they are a group united by familiar sounds.

The sound most familiar to them seems to be that of Willie and Waylon, but at times, the mix of Lowe’s vocals along with guitarist/singer, Eric Thorne gives off a Flying Burrito Brothers-esque Southern California vibe. Though the group has their own distinct twang, surprisingly, Thorne , who lends his own take on Texan, Lyle Lovett’s “If I Had a Boat” to the repertoire, along with vocals reminiscent of Robert Earl Keen, isn’t actually from Texas, but rather, Minnesota. And like most of the group, he didn’t grow up liking or listening to country music. 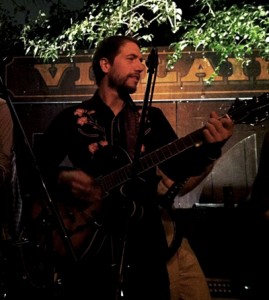 “It’s natural to sing a lot of country songs because they’re pretty easy to play and they tell great stories,” explains guitarist/vocalist Guilford Adams, who ads his originals, “Louisiana Cajun Boy” and “Moses Rose” to the set.

Since the Hootenanny isn’t technically a band, it’s been difficult getting members together to record. Still, under the right circumstances, it seems the collective are open to the idea of and recreating their live sound on recording.

But the LA Hootenanny isn’t a formal or serious thing, that’s the point. Rather, it’s a way for a group of friends to hang out every Thursday night, drink beer and play music for anyone who cares to listen and have a good time.

For more information about the LA Hootenanny, visit: http://www.facebook.com/#!/lahootenanny

The LA Hootenanny is every Thursday evening from 9pm-12am at Villains Tavern 1356 Palmetto Street LA, CA 90013.