“Bound to Lose” by The Far West 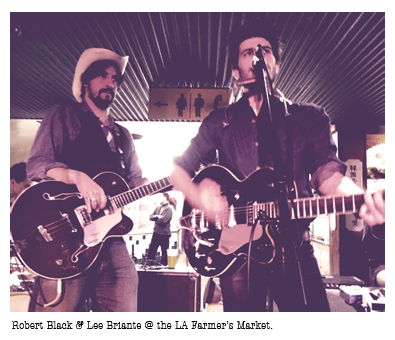 This is an exciting time for Los Angeles music. On the outside of a city dominated by an industry that is rarely kind to the good-natured or pure intentioned, there lies a blossoming community of incredibly talented folks, playing realcountry music. Like Outlaws of the 70’s, it seems these emerging artists are creating a scene that is beginning to give the Sin City a voice and sound of its own; and it is one, that in time, ought put LA among the most respected pockets of music in this new wave of Americana.

One of the acts at the forefront of this trend in true twang, are The Far West, a band whose name couldn’t better represent the spirit of what is brewing in the honest trenches of this often tough town. Coming by way of Texas (Robert Black- Bass/Vox), New York (Lee Briante – Guitar/Vox), Alabama (Alan Rogers – Drums), Virginia (Brian Bachman – Guitar) and Louisiana (Erik Kristiansen – Pedal Steel), The Far West bring LA’s signature, Gram Pa 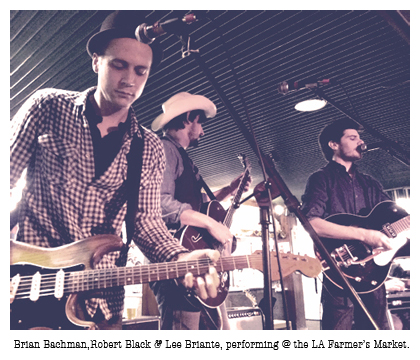 rsons style Country Rock, together with the type of Honky Tonk that is unmistakably Texas. But whatever it is they play, The Far West exceed in coming together to produce a distinct sound that is undeniably their own.

What is initially striking about this diverse group of musicians, is their ability to write songs that seem familiar. Led creatively by Robert Black and Lee Briante, they are traditionalists united by solid influences, who stand out by adding their own take on a style of playing and songwriting that suits them so well. Whereas many artists fall victim to “trying” to create a certain sound, The Far West do what comes natural to them and the result is Country Western at its core, that somehow manages to bring about a sense that what they’re doing is cutting edge, whether they intend it or not.

“Everyone has their strengths in this group and they seem to compliment each other. These guys are willing to try things and push the envelope musically too which is refreshing,” said Black, who had played in everything from roots music to punk bands before finding home as a driving force in The Far West.

The Far West are a nice break from the norm, a group who are happy to play for just about anyone that will listen. And whether it’s a room full of beer gulping Vets or a Cafeteria of hungry Angelenos taking a break from holiday shopping, chances are the majority people listening, aren’t used to the branch of Country they represent here. Yet somehow, no matter the crowd, onlookers almost always find themselves getting into it, due in part to the group’s undeniable character and exuberance. 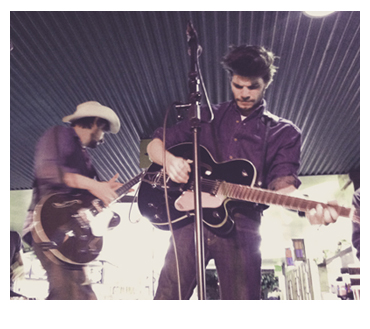 “The Far West has its own personality, which is different than the band culture I’ve experienced, but there is a respect of the craft and a camaraderie and vision that is a bit clearer,” said Briante.
It is this kinship among members that makes them so interesting and fun to watch. Their genuine respect for one another and the music they play is something special. And with the release of their self-titled debut, The Far West prove that their dynamic works, whether live or on record. Though it may seem peculiar to some that their album was recorded in an American Legion Hall, it speaks volumes for the group’s free spirit and inspiring creative enthusiasm.

“Most of the songs on the record were played for the first time at a gig we had at the Legion. So, it just felt right to record there. It was as simple as saying, after we’d played there one night, ‘Wouldn’t it be cool if we could record here?’ So, we asked the legion if that was a possibility and they very graciously said ‘yes.’ The only caveat was that the bar would 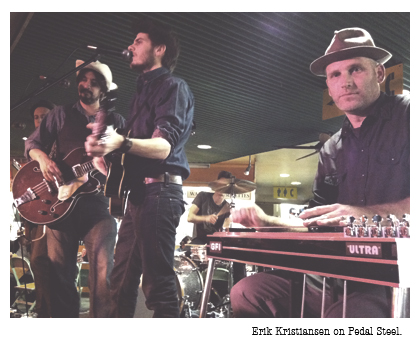 be open while we recorded, which was fine by us, I think it added to the atmosphere,” said Black.

What also ads to the mood of the album, is not only their bright electric-fused arrangements, but also the presence of Erik Kristiansen’s unmistakable, Pedal Steel playing, which is the glue that binds the tracks together. In watching The Far West record a track in the absence of Kristiansen, it seems the final touch in creating their trademark sound is his keen sense and ability to add just the right amount of bended riffs to any track. Of course, Kristiansen stands out, as one of the LA’s most respected “side men,” as he has worked with everyone from Eric ‘Roscoe’ Ambel in New York to Ryan Adams, before finding his own dedicated project with The Far West.

But, beyond just their music, The Far West readily draw on themes common to those living in one of the United States’ largest cities. Rather appropriately, the album kicks off with the catchy, Briante penned, “Bitter Drunk and Cold,” a fitting commentary on life in Los Angeles that captures the true grittiness and harsh reality, that isn’t Hollywood’s version of itself, but rather, more like Bukowski’s. 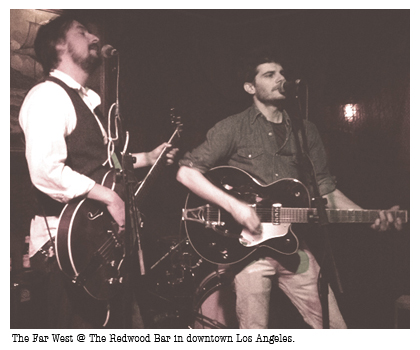 Written about his initial feelings after moving to LA from New York, Briante captures the overall loneliness that many experience when moving here alone, not knowing anyone at all. And as time passes and expectations dwindle, Briante sings of the disillusion many find after moving to a place of broken dreams, lost hope and sacrifice.

“LA is a unique city, a transient city, with many folks coming and going, feelings of possibility and of absolute desolation are both abundant, oftentimes simultaneously. Despite the loneliness, people here are going after what they want, and that makes for a one of kind feeling here in LA, that love / hate dichotomy that you hear,” explains Briante.

Briante, who looks like a James Dean, posses a ruggedness, that in combination with a voice remarkably similar to John Prine, sets him apart from most young artists. Like Ryan Bingham, Briante is something of an anomaly in look and sound. Influenced by artists like Bob Dylan, Woody and Arlo Guthrie, there is a wisdom in his folk phrasing, that, offset by the music, results in an original style that may run the gamut from classic to commercial appeal.

“I guess I hang slow on some words, then speed through groups of others. I usually have to work a song out at home for a while, just to make it sound ‘musical’ at all and not like me talking over music, ” explains Briante of his talk-sing style. 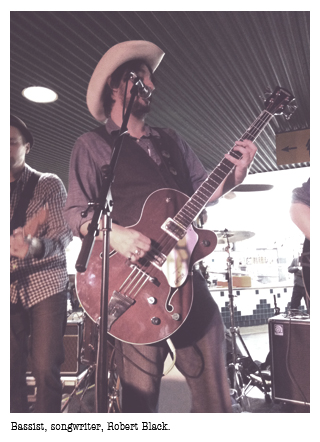 Then there is Robert Black, the other half of the group’s main songwriting duo. A true Texan, this bad-ass Austin native stands tall in his outlaw vest and cowboy hat, but despite his intimidating presence, he is actually one of the most down to Earth and welcoming individuals one could hope to meet in this city. Though Black is integral in the group’s playful energy and encourages everyone to enjoy the process, he is also the backbone of the group who keeps them organized and focused. But, like his songwriting partner, Black has also experienced the hurt and downside of life here. So, it is fitting that the song on the album most personal to him is the aptly titled, “A Town Called Lonsome.”

“At it’s core it’s a song about the end of a relationship, but specifically it’s about that sense of complete isolation that follows a terrible breakup where loneliness is more than just a feeling, it’s a kind of a place you inhabit and you take it everywhere you go. In order to write it properly I had to be totally honest about what that feels like which means revealing very personal shit. It’s the only way to make it ring true though,” said Black.

And though pain is a feeling that is frequently conveyed by the band, they all manage to keep a positive energy, perhaps a result of them finding each other. Beyond just playing together, The Far West are friends. They treat each other and those around them with respect and importance that couldn’t be mistaken for anything other than sincerity. They are also the first to thank others for their accomplishments, before taking credit for their own hard work. 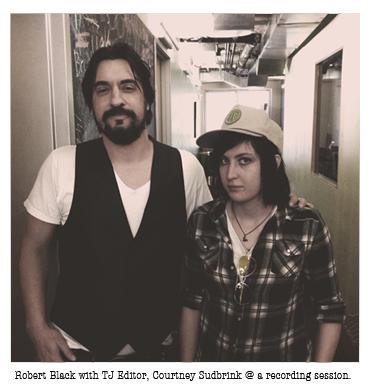 “Right away, after getting together just a couple of times, we knew it [the band] was going to be good. I started bringing in songs, Lee was writing great stuff. We made a demo after just a little over a month and played it for some friends like Kim Grant and Julie Richmond (who were booking the Grand Ole Echo). They both said “this is something special you’ve got here, keep at it,” explains Black.

For Los Angeles Country Music, the Grand Ole Echo is the definitive venue to showcase new acts. Though earning the support of Grant and Richmond is a solid coup that speaks of The Far West’s talent, they continue to play almost every-week at various dive bars throughout LA, bringing an air of true Honky Tonk that is hard to find this glitz and glamor centric city. But their commitment to doing what they love, bodes well for the liquor induced pain they sing about. Still, even if the subject matter lends to self-pity and sadness, they seem to be content here, having found solidarity with some of their peers. 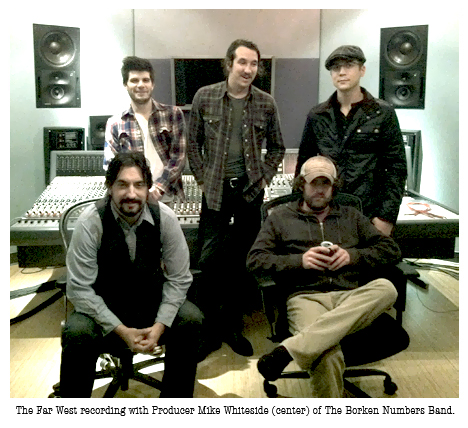 “There’s lots of great music happening here at the moment; The Broken Numbers Band, Leslie Stevens, Maxim Ludwig and The Santa Fe Seven. I always like seeing Olin and The Moon, Old Californio and I love Mark Lennon’s record. In a lot of ways, Los Angeles is a city like any other. Yeah, it can be hard to get people out to your show but that’s true in Austin and everywhere else too. But now, I like living in LA. There’s a good quality of life and I’m having a great time playing music with my friends,” said Black.

For their next album, The Far West plan to record with Mike Whiteside of the Broken Numbers Band, who may be young, but in watching him do a test-run production for The Far West, of a post-punk cover at a recording studio in Hollywood, it is evident that he is a great fit for the band and will only ad to the cool formula they’ve  established. 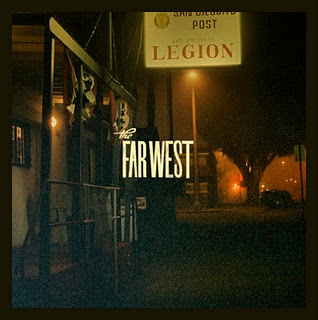 When asked about his fondest memory of playing in The Far West, Briante recalled a time with the band drove from Dallas to Joshua tree in 22 hours, only stopping for fuel. Though going into it, it seemed as though the trip would be a nightmare, it turned out, like most of the things the band do together, to be pretty special.

“The sun coming up somewhere in the desert, having no idea what time it is or where you are, even who you are. Then the van’s rumbling and shaking along, smelling pretty bad, but a smile of contentment happens in realizing you’re right where you want to be,” Briante fondly recalls.

With this dedication and attitude, The Far West are a band that should be on the radar of Americana fans not only in LA, but across the country. Though their previous effort could easily be put in contention for one of the top records of the past year, the longer they are together, it seems their artistic senses, bond and confidence is only growing. Look out for The Far West, they deserve any success they may achieve.