Si Kahn at 75: Friendships, Music, and Balancing the Scales 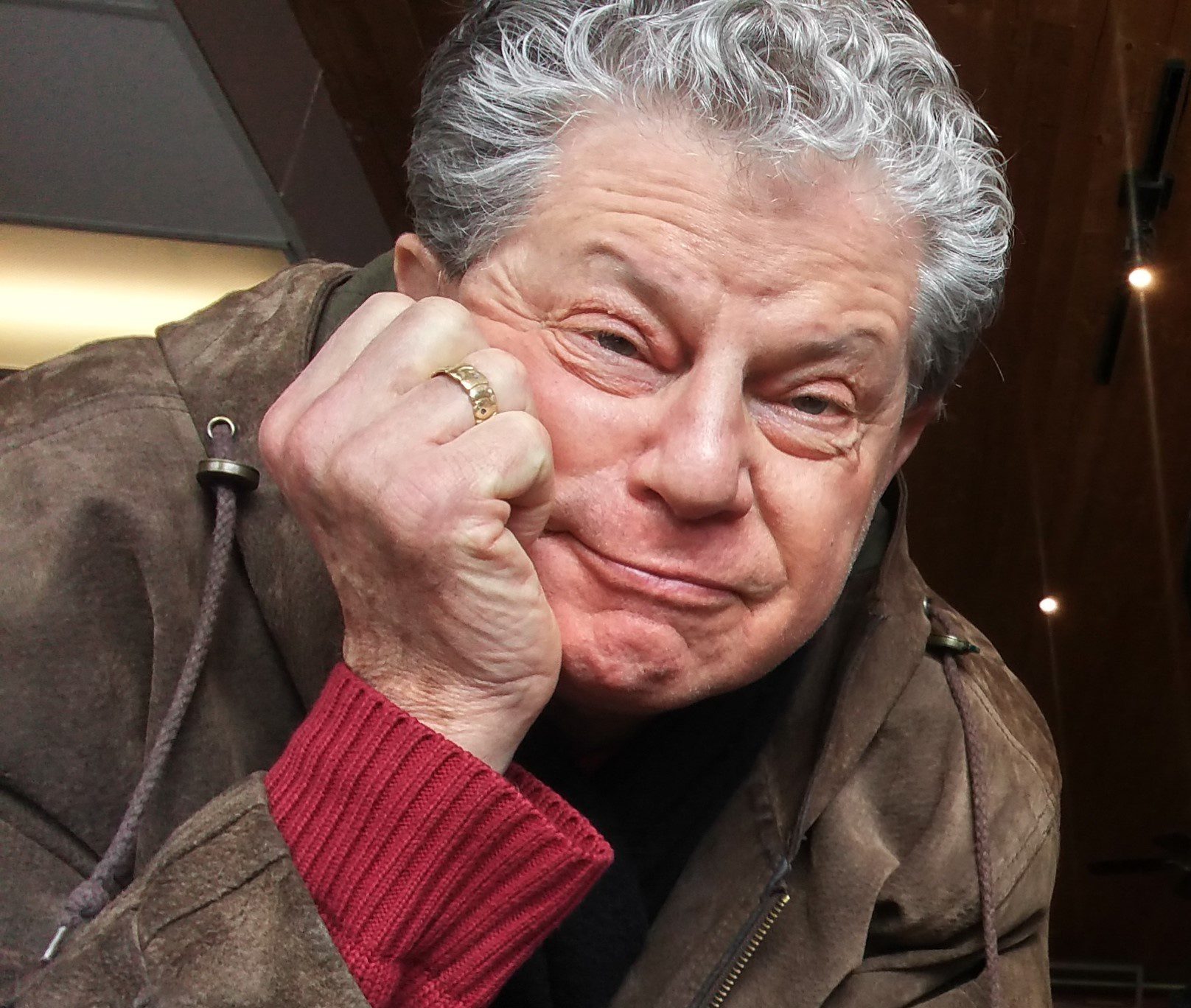 “That’s the relationship between music and activism,” says Kahn, who has fought for the oppressed and disadvantaged since the 1960s while recording numerous critically acclaimed albums, performing live, and writing books and plays. “It’s solid, symbiotic, historical. Think of ‘Yankee Doodle’ and the American Revolution.”

Kahn celebrated his 75th birthday week with a flurry of live performances and is releasing a new album, It’s A Dog’s Life, by Si Kahn and The Looping Brothers on May 31 (see a video from that album at the end of this story). He’s also released a soundtrack from his 2014 musical, Mother Jones in Heaven, and in August, Dutch label Strictly Country Records will issue a 5-CD box set titled Si Kahn at 75, The Europe Sessions.

Kahn’s recent live performances have included the WoodSongs Old-Time Radio Hour, MerleFest, and Mountain Stage, where guest host Kathy Mattea sang his song “Lawrence Jones.” The song, which Mattea recorded on her 2008 CD Coal, is about a young miner shot to death on the picket line during the Brookside Strike in Harlan County, Kentucky, during the early 1970s. 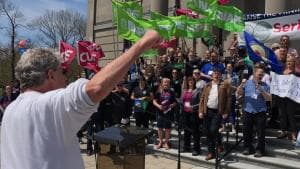 Si Kahn leads the union anthem “Solidarity Forever” at a demonstration by members of the Newfoundland & Labrador Council of Labour in St. John’s in Canada. (Photo courtesy of Si Kahn)

Kahn, who is based in Charlotte, North Carolina, was one voice in a movement that fought to get union contracts at the Brookside Mine, and he was involved in many other movements too. They included fights, he says, to get union contracts at J.P. Stevens textile mills in North Carolina; clean up cotton mills nationally and get fair compensation for workers disabled by brown lung disease; and abolish for-profit private prisons, jails, and detention centers, including immigrant detention centers.

“All these movements resulted in major victories, although some of these victories have been undermined over time,” Kahn says. “I don’t take, and shouldn’t be given, credit for any of these victories. I played roles in each of them — sometimes significant roles — but so did many other people.”

But don’t call him an activist.

“To me, an activist is someone who stands up, speaks out, works for justice,” he says. “It’s an honorable, admirable thing to be and do, but that’s not me. I’m an organizer, someone who helps other people stand up, speak out, work for justice — not individually, but collectively.

“Organizers help people learn how to use the power of numbers against the established or the establishment power of wealth, position, authority. We help them build organizations that can help balance the scales and achieve real victories that change the conditions of life for everyday people.”

Few people know Kahn better than John McCutcheon, who recalls meeting him for the first time on Thanksgiving in 1973. “I was a 21-year-old without a dinner invitation, so I decided to drive up to Harlan County and play for the striking miners at the Brookside picket line,” McCutcheon says. “Si Kahn was there as an organizer for the United Mine Workers and a closet musician. He invited me to a rally at the union hall followed by a United Mine Workers-provided Thanksgiving meal that — to quote Arlo Guthrie — couldn’t be beat.

“Now, nearly 50 years later, we’ve co-written hundreds of songs and five Grammy-nominated albums. We’ve served on one another’s boards, supported one another through good times and bad, and Si even godfathered my youngest son, Peter. We’re being dragged, kicking and screaming, into old fart-dom but still have hour-long phone conversations.”

McCutcheon calls Kahn “one of the finest songwriters of our — or any — generation.”

“And he did it in his spare time,” McCutcheon adds. “His first job always was as an organizer. And that commitment to opening up possibilities for ordinary people certainly informs his songs. They help us remember, but they also help us imagine.

“They help us find our own inner strength, but also help us see what can happen when groups of individuals work together. They help us laugh, and they help us grieve. They help us see the best of who we’ve been and who we might become. And they do it in plain-spoken, elegant language that makes the most seasoned songwriters shake their heads and go, ‘Damn!’”

McCutcheon says the hundreds of songs he co-wrote with Kahn include “children’s songs, topical stuff, love songs, the whole gamut.

“We’re like a construction team. Si is the wall-and-stud guy, I’m the finisher. But, mostly, we simply fire one another up and egg one another on. I’m simply more creative and productive when I’m with Si.”

Stories that Need to Be Told It’s a productive and creative year for Kahn himself, certainly. It’s A Dog’s Life features the German bluegrass band The Looping Brothers and contains 10 of Kahn’s previously unrecorded songs, plus he sings lead on three older songs. The 5-CD set coming in August includes albums he recorded in the Netherlands, Switzerland, and Germany.

One of the five CDs is Threads, which Kahn recorded with the Kruger Brothers when, he says, “they were still living in Switzerland and had an umlaut in their name.”

Besides Kahn’s numerous albums, his songs have been recorded and performed by hundreds of artists, including Mattea, Peggy Seeger, Hazel Dickens, The Red Clay Ramblers, Robin and Linda Williams, Laurie Lewis and Tom Rozum, Rosalie Sorrels, and Cathy Fink.

Fink became the first person to record a Kahn song — “Backroom Lady” — on a mid-1970s album issued by a Canadian label, and she and her partner, Marcy Marxer, produced some of Kahn’s albums, including The Songs of Mother Jones in Heaven.

“From the first listen in the early 1970s to Kahn’s first album, New Wood, I heard the essential connection between songs and social justice and how it could be a roadmap for much of my own work,” Fink says. “Si drew his melodies and song structures from the traditional music I was immersed in and artfully created anthems that have stood the test of time. Si writes love songs, women’s songs, union songs, stories-that-need-to-be-told songs, songs for community singing, and songs that invoke the spirit of Woody and Pete.”

In addition to a bit of Pete Seeger’s spirit, Kahn also had his friendship.

“I had, and have, nothing but respect for who Pete was and what he did with his life,” Kahn says. “But I think he liked me, and we were able to be friends because I only took him with limited seriousness. My guess is I was one of the few people who teased him. I once told him jokingly that I thought he was one of the worst name-droppers I’d ever met, and I think that meant something to him.

“I think Pete also liked that I understood and respected at least part of his history — things like his membership in the Communist Party. I study American political and radical history, so Pete could talk to me comfortably about the context of his times. He also gave me far too much credit for the very minor role I played in breaking the labor movement’s 50-year boycott of Pete.”

McCutcheon, whose most recent album, To Everyone in All the World, commemorates what would have been Seeger’s 100th birthday this month, says he was told by Kahn’s wife, Elizabeth, that it’s McCutcheon’s job to clean up Kahn’s office after he dies.

“It makes me question his love for me,” McCutcheon says. “I’ve seen his office. But I’ll do it, because I know there are probably another hundred songs tucked away as bookmarks, scraps left here and there, cassette tapes that no longer have a machine that’ll play them.

“Love, music, and ideas flow out of Si as easily as most of us breathe. And it’s been my privilege to be a partner on that ride.”

McCutcheon says he and Kahn are considering recording “some of the songs we’ve done together over the years.”

“I’d record something of his, he’d record one of mine. Working title: Friendship. Appropriate, huh?”

Kahn says it should be left to others to judge his song catalog and musical legacy. Then he mentions “the wonderful closing lines” of Marge Piercy’s poem To Be of Use: “The pitcher cries out for water to carry / And the person for work that is real.

“I would like my songs to continue to be of use,” Kahn says. “People tell me how they sang one of my songs at their grandmother’s funeral, at their own wedding, on a picket line, in a demonstration, at a community sing. I would like that to go on.”

“Government on Horseback” from Si Kahn and The Looping Brothers’ It’s a Dog’s Life, out May 31.