Shantell Ogden – You Had Me At “Goodbye”

It is truly a privilege as well as a treat to preview and review a new album that comes out of the Nashville community.   There is additional perspective in reviewing one when it is by someone whom I consider a dear friend.   Performing songwriter Shantell Ogden has issued two previous collections of critically praised music in five years time (Water Through Stone in 2008 and Stories Behind Songs in 2011,) and I think the third time will be a charm.   And believe me when I tell you, the charm is in the lady herself, and you’ll happily fall for it as you listen to her third offering, Better At Goodbye.

This well crafted assortment of eight tunes reflects the tender and vulnerable heart of Miss Ogden, and it’s a captivating glimpse into a journey that unfolds from Utah dairy farm girl to young independent woman who made a name for herself in the big city.  Love relationships, dreams, doubts, self-discovery and epiphanies.  Is Shantell telling you about herself with this CD?  You’ll have to decide for yourself, but you will undoubtedly enjoy the time you spend finding out!  With Better At Goodbye, she gets back to her singer-songwriter roots, delivering very honest and introspective lyrics through lustrously crafted hooks.   Fans of country music are sure to enjoy Shantell’s lilting vocals which seem to float above the music, but this new album will indicate that her style is a bit more diverse than to put her in a box, genre-wise.   The melodies are infectious; I felt like singing along almost right away.  In fact, I got a nice warm feeling as I listened to Better At Goodbye, which is quite gratifying on a chilly month like December.  It evoked fanciful memories of listening to late-nineties folk-pop radio queens like Jewel, Sarah McLachlan, Amanda Marshall or Paula Cole, except the vocal styling is so much more down-home.   Her previous CD, Stories Behind Songs, was acoustically driven while Better At Goodbye has more pop elements.   During a recent interview, Shantell pointed out that, although she has written several country tracks, it is actually Americana music that you are listening to with this album.  A very suitable distinction, indeed!

However, the Nashville footprint is undeniably evident on Better At Goodbye thanks to John Willis, a multi-instrumentalist and producer extraordinaire who took Shantell’s songs of life and love to an exciting and aesthetic level.  That’s just my fancy way of saying that you’re going to like the way it sounds!  And, like a great chef concocting a brand new soup, John throws in many surprise ingredients.  In this case, you can taste various wild-card instruments such as harmonium, glockenspiel,  psaltery, and even a Melatron.   That’s pretty flavorful!   And then making certain that too many cooks don’t spoil the broth, he is accompanied by a few more musicians:  Steve Brewster on percussion,  Gary Prim on keys and Thom Flora on vocals.  All served up hot and good to the last spoonful!

Shantell’s residency in Music City, USA has been a blessing, and her work ethic is apparent in the music she creates.   A blank page will neither scare her nor slow her down.  In fact, she has proven she can write formulaic and catchy songs on the spot, which is an invaluable skill in that town.  But I have found that some of her best creations have been brewed up through her collaborations with her professional friends, some of whom are top songwriters in the business.   This is demonstrated in the opening two tracks, “The Lie I Tell Myself” and “Only God Knows Why” which were co-written with veteran song-smiths Jan Buckingham (Tim McGraw, Whitney Houston, Pam Tillis) and Wood Newton (Kenny Rogers, Steve Wariner, David Ball)  These particular songs have the chops to be put into regular rotation on country radio, and I would recommend that program directors get on the ball and start playing it now.  (Oh, if it was that easy!)  Marcum Stewart (Acklen Park) co-wrote “Looking For My Last”  inspired by a quote, “It may be more romantic to be someone’s first love, but its better to be their last.”  And finally there is Shantell’s long-time friend and collaborator, the great Bill DiLuigi, who co-wrote two songs:  “Where You’re Not”which stems from the idea that all the places you’ve been to matter less when you find the one.  And the title track, “Better At Goodbye” which according to Shantell sums up the essence of the project, which is healing, self-examination and saying goodbye to bad relationships and welcoming new ones. 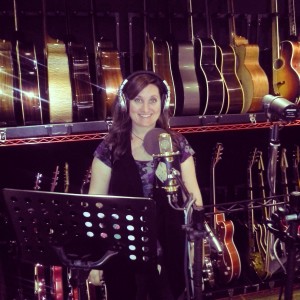 Shantell has surrounded herself with great musicians and writers, but this wonderful lady’s talent sparkles on the second-to-last track, “More To Me” which is my personal pick and will tug on those heartstrings, for sure.  She performs it with both emotion and grace.  You just gotta get this album when it comes out on December 17th!

My bride and I have gotten to know Shantell, and she is just as sweet as the voice you hear on the record.  You’ll agree when you meet her as well.  Get to know her on her website and blog at www.shantellsmusic.net  and also on her facebook page www.facebook.com/shansmusic  Lots of pictures and music to check out.

And of course she is on iTunes, and you can check out her music including an advance 3-song EP!  iTunes “Just the Lonely”

If this current album is your first introduction to Shantell Ogden, I am certain that she’ll have you at “Goodbye!”