I am always searching for a musical experience to take me to that magical plane of existence, where sound becomes colors and the cares of the world fade into an inaccessible plane of banishment.  In this pursuit, I have several “go-to” musicians who never fail to take me there – whose talent is above and beyond the standard.

Enter Sean McConnell.  He is not only a gifted songwriter; his voice is clear and smooth.  When I read that he would be playing the Parish on 6th Street Wednesday night, I texted my go-to GNO accomplice, The Hot Divorcee, and made the plan.

The first obstacle – what to wear?  Sixth Street presents certain challenges to a woman of my age.  I’m beyond the ability to wear low-rise bellbottoms and sleeveless belly bearing tops with any type of dignity, but I’m not ready to venture into a club wearing Birkenstocks and pedal pushers.  As always, I find that jeans and a black top are a fine compromise: strap on my tall boots and I’m off to the show.

I was prepared for what Sean McConnell brought to the Parish.  He is a man of faith and his faith comes through in his craft.  Although I would not put him in the Christian music genre, many of his tunes have a definite message of hope.  He does not sell any particular style of faith – the name Jesus is not in any of his songs.  Rather, the only certainty that may be gleaned from his lyrics is he embraces a higher power for relief from his flaws.  As a person who eschews organized religion, this is something I can embrace.  Plus, he’s been known to shoot Jager-Bombs on stage and, as The Hot Divorcee so aptly described him, he’s hot in a Blarney-Jew-Rocker sort of way.

With this in mind, I was quite curious to see who he would draw to the Parish.  I was unprepared for what I found.  Fans from ages 21 to 60 flocked into the club, covering the floor from stage to bar.  Roughly 2/3 of the listeners appeared to know the words to every one of his songs.  They crowded the stage and sang out loud.

All the concert going favorites were in attendance.  “The Finger Guy” was pushed up against the stage.  (You know the one – he alternates between banging his “hang ten” to the pulse of the music and pointing his finger to the lyrics that are especially meaningful.  He has no inhibitions, and you strongly suspect he is stone cold sober.  His eyes glow with undisguised zeal.)  “The Drunk Dancing Girl” was there, dancing crazy with her clingy boyfriend.  “Yosemite Sam does Wyatt Earp” was there, proudly displaying his red handlebar mustache while wearing full western regalia and drinking LoneStar.

Sean opened with the full band and a driving rock sound, but I was full of anticipation for the moment when he would dismiss his band and take up his acoustic for a bit of solo work.  I’ve said it more than once: one of life’s sexiest scenarios begins with a man playing an acoustic guitar and singing his songs.  When the time came, however, I was too busy listening to the lyrics of his new song to close my eyes and let go of my head.  And then I was fascinated as the group around us started drunkenly swaying to the music, hands in the air.  When Sean got to the hook: “You’re not who I thought you were, praise the lord” some of the patrons started yelling, “Praise the Lord! F**K YEAH!”  Okay, I wasn’t on my magic plane, I had wandered into the world of the surreal.

But that, my friends, is the magic of Sean McConnell.  He moves effortlessly from driving roots rock to tender ballads of hope and forgiveness.  He elegantly serenades about flaws that haunt most of us, and extends a hand of kinship.  The dichotomy of the human soul, the Saint’s Heart in the Sinner’s Skin, is fully realized in those who follow his music.  Myself included. 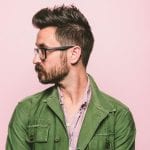 THE READING ROOM: Sean McConnell on Entering Other Worlds Through Books