I realize that the Screaming Trees don’t necessarily fall into the americana and roots category but they are one of my all time favorite rock bands and Mark Lanegan’s solo work, which does fit in the roots category, is right up there with the best of them.  I was super excited to hear about this record coming out when I heard about it last week and want to share the news!

In the waning months of the 20th century, legendary Seattle band Screaming Trees went back into the studio one last time. Having been released from their label and realizing that the outlook was grim, the Trees entered Stone Gossard’s Studio Litho to preserve the last batch of songs the band had written. Financed by the band and produced by drummer Barrett Martin, these sessions proved to be their last. On June 25th, 2000, the Trees played their final concert in front of 20,000 people at Seattle’s Memorial Stadium, after which the band members went their separate ways. The final recordings were never mixed or released, and for more than a decade, the original two-inch tapes lay gathering dust in the basement of Gossard’s studio.

Twelve years later, in the winter of 2011, Martin and long-time friend and producer Jack Endino found the two-inch multi-track reels, carefully baked and cleaned the tapes, transferred them to a digital format, and brought back to life those final 10 songs. To their pleasant surprise, the music had a raw, energetic quality, with the band cracking jokes and howling with laughter between takes – they were clearly having a good time. Mark Lanegan’s smokey baritone was in top form and so was the band, with original members Gary Lee Conner on electric guitar, his brother Van Conner on bass, and Barrett Martin, the band’s long-time drummer. REM’s Peter Buck guested on acoustic guitar and electric 12-string guitar, and Trees touring guitarist Josh Homme played some rhythm guitar. The sessions were a remarkable last testament to the band’s impressive 15 year career.

This final Screaming Trees album is appropriately titled Last Words: The Final Recordings and will be released internationally as a digital download on August 2nd, on Barrett’s label, Sunyata Music, through IODA/Burnside distribution. CD and vinyl versions of the album will appear in the ensuing months, with the album cover being designed by world-renowned artist Erin Currier.

There are no plans for a reunion, as the band members are finally well-adjusted adults who actually get along with each other and have happily moved on with their lives. Gary Lee started a family and the band, Microdot Gnome, and Van, also a family man, started the band Valis, as well as the label Strange Earth Records. Barrett started his own label, a jazz group, and became a college professor, and Mark has cultivated a highly successful solo career, being recognized as one of the greatest singers of his generation. No, instead of a reunion like so many other bands have done, the Screaming Trees just want to make this final album available to their friends and fans – their Last Words, so to speak. 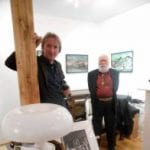 What does a Haitian literary giant and a Glasgow song writer have in common? Answer Claophonies! Rob Ellen asks some more questions.