Screamin’ Jay Hawkins: Keepin’ Rock and Roll Away From the Brain

“…The only people for me are the mad ones, the ones who are mad to live, mad to talk, mad to be saved, desirous of everything at the same time, the ones who never yawn or say a commonplace thing, but burn, burn, burn like fabulous yellow roman candles exploding like spiders across the stars and in the middle you see the blue centerlight pop and everybody goes ‘Awww!’” – Jack Kerouac

Normal is boring. Give me crazy. Weird. REAL.

What’s Paris Hilton done other than being rich?

Sure, Lindsay Lohan is “wild”…but she’s got no style to go along with it.

I want Britney Spears-level meltdowns from my celebrities; teen pop starlets with their recently-shaven heads whacking SUVs with umbrellas. I want Angelina Jolie and Billy Bob Thornton making out on TV and wearing vials of each other’s blood around their necks.

The great (and weird) Keith Richards once said that when rock and roll reached the head, it was all over. Rock and roll is meant to stay below the neck. I’d take that a step further and say below the belt, actually. But, an element of the heart must be present. Either way…keep rock and roll out of the brain.

Throw away the cookie cutter and play from the heart.

The late, great Screamin’ Jay Hawkins would have turned 82 earlier this week. He’s a prime example of what I would call one of the “original Dirty Roots”.

DIRTY: adjective: Not clean or pure – Containing impurities – Not clear and bright – Characterized by a husky, rasping, or raw tonal quality

ROOTS: noun: Something that is an origin or source (as of a condition or quality) – The part by which an object is attached to something else

Dirty Roots is not only the name of my radio show, it’s the name of my world view. It encompasses my spirituality and faith. It’s also a label I apply to folks brave enough to live from their heart not their brain and, in doing so, chuck “normal” out the window.

Screamin’ Jay Hawkins did this.

One of the things I try to accomplish through my Dirty Roots Radio Show is to transport listeners back to a time when we could be shocked by music. Not, “Oh my God, Sinead O’Connor tore up a picture of the Pope” shocked, but rather…

Imagine it’s 1973. You’re looking through your older brother’s albums and you come across one with a funny looking woman on the cover. WAIT! That’s not a woman…it’s a super-skinny, shirtless man with long hair, lipstick, and tighter-than-skintight gold lame pants, hanging on his microphone, looking uncaring and menacing all at once.

The writing on this album, Raw Power, is spelled out in horror movie font that makes you think of the movies that show at the local “grindhouse” theater that your parents won’t let you visit. You put the record on and the most horrifying, weird sounds come from the speakers, but you can’t stop listening.

Now, imagine it’s 1965. Your parents have generally accepted that this “rock and roll” thing is real and it’s here to stay. Nothing too scary has come of it since Elvis pumped the pelvis and those British kids brought the shaggy hair over with them.

The family is setting down together to enjoy some television.

And this comes on:

Voodoo music. Grunting and growling and screaming and gurgling. On network TV. With wild-looking eyes. In a leopard-print suit. With a bone through his nose.

You can’t see it in this video, but Screamin’ Jay Hawkins typically made his entrance onstage by popping out of a coffin. He played with rubber snakes and usually carried a voodoo stick with a skull on top that smoked a cigarette and had glowing eyes (his name was Henry, by the way).

And now allow me to call attention to the elephant in the room…Remember, this is 1965. No civil rights yet. Black people are still “less than” in the eyes of most people.

And now this one is invading the living rooms of suburban America doing THIS?

Watch the video again and tell me how it makes you feel.

THAT is how rock and roll is supposed to make you feel.

Keep rock and roll away from the brain and play from your heart. 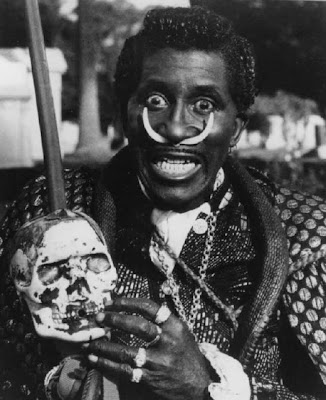 “There is no normal life…there’s only life. Now, go out and live it.” – Val Kilmer as Doc Holiday in Tombstone
Tune in to Dirty Roots Radio, hosted by Ryan Mifflin, this and every Thursday night from 8 to 10 p.m. (central). Listen from anywhere in the world at www.wgrn.net. Be sure to tag Dirty Roots Radio in your Facebook status if you’re listening – and post on our wall where you’re listening from!!! Invite your friends to listen and to join our Facebook page, too!

The timely revelations of Sherry Rich