Thanks to NPR’s First Listen, we can hear Sun Midnight Sun, the new one by Sara Watkins, in its entirety.  Click here – you can choose to listen track by track or just listen to the entire record.

This is the second solo record by Watkins, most known up to now for her work as a part of Nickel Creek.  But with music this strong and diverse, that may change.  In Sun, Watkins takes us from old school instrumentals to a galloping new age duet with Fiona Apple.  Taylor Goldsmith and Jackson Browne also appear on the record.  One of my favorites, When It Pleases You, would be a rock pop song (albeit top notch) but for an interesting instrumental ending.  Some tracks are more reminiscent of the Nickel Creek days, but those of us who listened to that group are beginning to see with this record that Chris Thile wasn’t the the only Nickel Creeker with some interesting ideas about song selection and arrangement.  Hats off to Ms. Watkins (who often wears cool hats, by the way).

In related news, Watkins will open for Dawes (Mr. Goldsmith’s band) beginning May 31 through much of June and for Jackson Browne’s 2012 Solo Acoustic Tour beginning July 14 in North Carolina and continuing through mid-August.  Details are available here. 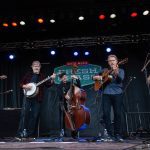