ROOTS IN THE ARCHIVE: Two Irish American Women Who Carried Songs Across Time 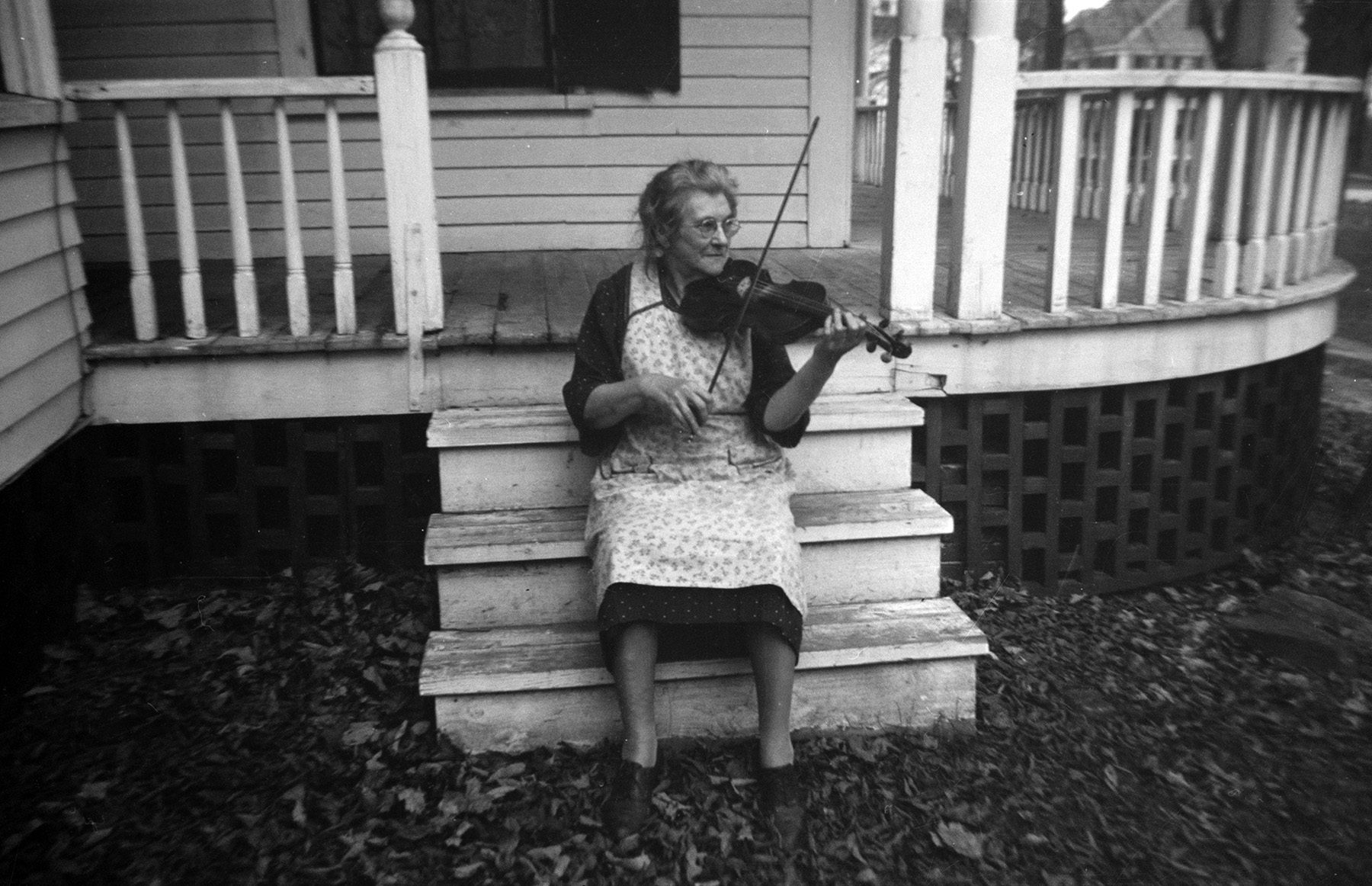 It’s Women’s History Month, as well as Irish American Heritage Month, so I thought we might delve into the American Folklife Center archive and look at two great and influential field recordings from Irish American women. I selected these two songs from a longer set that I put together a few years ago for an event at the Library of Congress. One day, we’ll get back to doing live events … but for now, we can share these recordings with you here!

We’ll begin with singer and fiddler Carrie Grover (1879-1959), who was born Carrie Spinney in Black River, Nova Scotia. She moved to Bethel, Maine, at the age of 12 and lived in Maine for the rest of her life. Grover had Irish, Scottish, English, and Welsh forebears, and her father and mother sang traditional songs both separately and together. In later life, Grover recalled an incident from her childhood that had a longstanding impact on her: She overheard her father remark to her mother that, after they were gone, no one would sing the old family songs anymore. This encouraged young Grover to learn as many songs as she could, and also to write out the words and music of her songs in a book so she could pass them on to others.

One of the songs Grover’s father sang was “Arthur McBride.” Grover believed that her aunt — her father’s sister — also sang the song, making it likely that they learned it from her grandmother, who was a singer with a large repertory of folk songs. It’s a ballad that scholars concur was composed in the northern part of Ireland, most likely Donegal, in the early 19th century. It tells the story of two young Irishmen resisting the attempt of a recruiting party to conscript them into the British army. As such, it is a song of Irish resistance to English imperialism.

In December 1940, after hearing folklorist Alan Lomax on the radio talking about old songs, Grover wrote him a letter at the Library of Congress introducing herself and telling him about her family’s songs. They began a chain of correspondence that lasted at least until Lomax left the Library two years later and became quite friendly; at her insistence, Lomax (who was 26 years old) addressed her as “Aunt Carrie.” In April 1941, she took a trip to Virginia and Washington, D.C., to visit her niece, and continued to New Jersey to visit her son. During this trip, she was recorded by Lomax in the Library of Congress recording lab on Capitol Hill, and by Sidney Robertson at her family’s homes, contributing 88 songs and fiddle tunes to the Archive of Folk Song. Grover was later recorded and photographed by Eloise Hubbard Linscott, and those materials, too, came to the Library.

Grover sang her version of “Arthur McBride” for Lomax in April 1941, in the Thomas Jefferson Building of the Library of Congress — the same building where I work today. Hear it below!

The story of Grover’s version of “Arthur McBride” doesn’t stop there, though. It came to be widely influential in the folk world. That’s because after her trip, Grover continued to advocate for herself and her family songs. With the help of her old school, the Gould Academy, Grover published the words and music to many of them in a book, A Heritage of Songs, in 1953. In the 1970s, the Irish folksinger and songwriter Paul Brady saw a copy of Grover’s book while visiting with American friends. Recognizing the song’s Irish connections, Brady learned “Arthur McBride” from the book and took it back to Ireland. He played his version as a member of the band Planxty, and recorded it on the classic LP Andy Irvine and Paul Brady. You can also see Tiernan McBride’s short film based on the recording … but be aware that it leaves out a verse!

The Andy Irvine and Paul Brady album is considered a classic of Irish music. Of all its songs, “Arthur McBride” is probably the one that’s had the greatest impact outside the Irish folk scene, thanks to Bob Dylan. Dylan, who had long been an admirer of Brady’s, recorded his own version of the song on his album Good as I Been to You (1992). This cover brought it to a very wide audience, and cemented Brady’s reputation among Dylan’s fans as a master of traditional ballads. Sadly, Grover is often overlooked. Still, Grover’s life’s mission was to keep the songs alive, and both Paul Brady and Bob Dylan helped her do that with “Arthur McBride.” Read more about the song at the Folklife Today Blog. 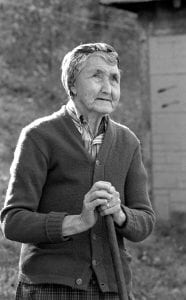 From Maine, we’ll move down to West Virginia and talk about Maggie Hammons Parker (1899-1987), who was part of an important family of tradition bearers from West Virginia. The Hammons Family was documented in the 1960s and 1970s by Library of Congress fieldworkers Alan Jabbour and Carl Fleischhauer, among others. Maggie and her siblings were all singers, musicians, and storytellers. She was known for her enormous repertory of songs, family legends, and humorous stories. She also played banjo with a delicate touch, in two-finger and in “frailing” style. In the West Virginia counties of Pocahontas and Webster, she was also celebrated for her extensive knowledge of herbal cures and other folk medicine. When she was documented in the 1970s, she was a widow living with three of her widowed or unmarried siblings, brother Burl and sisters Emma and Ruie, in a house in Stillwell, West Virginia. Read more about the Hammonses in this extensive article from the American Folklife Center.

Parker’s song “Ireland’s Green Shore” is a 19th century Irish broadside lyric. In form, it’s an adaptation into the English language of an earlier Gaelic type of political song known as the “aisling,” or “dream vision.” In this genre, the narrator dreams of encountering a beautiful woman who is revealed as the soul or personification of Ireland. She often laments the political situation or the poverty of the Irish under colonial rule. The song is often known as “Erin’s Green Shore,” and under that title you can find both a broadside and sheet music on the Library of Congress website. This song is usually associated with the Irish Catholic culture that became firmly established in America in the mid-19th century. However, it also became popular in the Appalachians among descendants of Scots-Irish and German protestants, like the Hammons family. In Parker’s version, the political content of the story is largely lost and the song appears to be a straightforward love song, in which the narrator loves both the woman and Ireland itself.

Like Carrie Grover’s “Arthur McBride,” Maggie Hammons Parker’s “Ireland’s Green Shore” has inspired later generations of folk musicians. In particular, bluegrass master Tim O’Brien went so far as to record two different versions inspired by this field recording: one version with vocals and another as an instrumental.

As I mentioned, these were only two of the tracks I pulled together to celebrate Irish American women back in 2020. You can find the rest at Folklife Today, starting here. In the meantime, happy St. Patrick’s Day, and enjoy the rest of March! 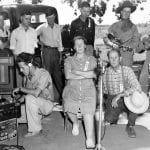 ROOTS IN THE ARCHIVE: How Cowboy Culture Found Its Way Into New England Poetry 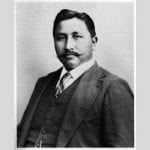