Robbie Fulks – It drawled from the mouth

“It seemed to fit,” Fulks explains. “I needed a two-syllable derogatory word for a man….I don’t think homosexuals would object to that as much as the cowboy singers themselves. So long as I’m offending the right people.”

“We’re gonna get a lot of shit for that,” says Warshaw, sheepishly. “He does a lot of things that are not PC and I love him for it. He’ll insult everyone, so I guess that’s why I don’t have a personal problem with it even if I don’t agree with his insults.”

“Obviously, we’re not putting out that record,” says Geffen’s Long.

The record Long refers to is South Mouth, Fulks’ parting release for Bloodshot, due in stores October 7. “Fuck This Town” is just one dimension of South Mouth, which Fulks says “covers more bases” than Country Love Songs. “(That) was kind of like a concept album, which puts a certain limit on it,” he says.

His next release will be on Geffen, sometime in 1998. “It doesn’t appear that he’s going to be making the same kind of record that he’s making for Bloodshot,” Long says. “There’s a lot more to his songwriting style. One of the reasons Rob was interested in us and we in him is that he wanted to explore other kinds of music.” Long acknowledges favoring Fulks’ twang, and expects the next record to be more of a maturation, “like Whiskeytown,” referring to that band’s recent release on Outpost/Geffen, but he also mentions possibilities in TV theme songs and movie scores.

His idiomatic range is, by all accounts, nearly comprehensive, but if Fulks’ grasp of songwriting styles evokes Britannica or Colliers, his own approach befits the Coen Brothers: Send up, subvert, stretch the limits — and make it graphic.

“Cold Statesville Cell”, for instance, establishes the mood of an antique hill-country murder ballad before veering off alarmingly, a pattern no doubt followed by many an actual murder. A victim chances into the headlight gleam of a man who, apparently at that instant, recognizes himself as a sex-motivated killer. The murder itself continues for an unprecedented two verses as the victim’s body sinks ever lower “with each hammer blow” and the “earth beneath her darkens with her heart’s blood.” Then comes the really gory part: the guitar solo. Fulks further twists the form by taking up an electric and demonstrating exactly how a totem of the sex act can be subverted to the ends of violent death. Only such a dramatic and effective denouement could deplete the cliche so thoroughly from the song’s next verse, in which the murderer, on his last walk, envisions a newborn whose “mother looks down with love into a killer’s eyes.”

In the Louvin Brothers-like epic “South Richmond Girl”, Fulks and duet partner DeWan purposefully treat a second murder entirely differently. The motivation is more than apparent, but the murder is merely implied by the guitars playing on under an absent verse. In the last verse, the singer looks into his own grown son’s eyes and finds, if not forgiveness, at least newborn understanding.

“Jim plays all over the record,” Fulks says, but on DeWan’s greatest contribution, the song “You Wouldn’t Do That to Me”, Fulks plays and sings alone. It’s a tune of the Cole Porter sort for which the mold might as well have been broken in 1949. Fulks revives it with intimacy and resignation you might be embarrassed to overhear through the windows of the heartbroken guy next door: “Must be some problem with the telephone/Sometimes when I answer, all I hear’s the dial tone.”

Fulks explains he remembered this song when, stuck for a ballad the week before song charts were due to the Skeletons, he had to abandon one of his own. “A lot of times when I get to about the halfway point in a song and it just isn’t grabbin’ me, I have to really bite my lip and just throw it away. The whole week’s wasted, but I don’t have to work on it anymore….You can’t take a word out of [DeWan’s song]; there’s no improvable word in the song.”

In the indelible, Paycheck-like “Forgotten But Not Gone”, Fulks sings how it feels when your loved one is present but their heart isn’t. The Everly Brothers could easily cover the flip side, “Heart, I Wish You Were Here”, in which a lover wishes he hadn’t left his heart elsewhere long ago. “May The Best Man Win” and “I Was Just Leaving” bow to Bakersfield, colored in by Tom Brumley on steel. “I Told Her Lies” and “Dirty Mouth Flo” are easy pitches to the fratboy set. Mostly, however, the record just swings like the dickens, owing largely to the Skeletons’ full-service rhythm section. Especially in “Goodbye Good Lookin'”, beat-deficient dancers get a free ride from the Sumo-wrestler-on-a-pogo-stick punch of Lou Whitney’s bass and Joe Terry’s keyboard.

Also highly danceable is “Busy Not Crying”, wherein lies a microcosm of Fulks’ Nashville troubles. Line after sly line enumerates useful and humorous distractions that resolve in one of the song’s cleverest turns of phrase: “Movin’ each day at a mighty quick pace/My heart stays in the same sad place/Nothin’ that heavy’s gonna ever catch up to me.” Remarks Fulks, “Some Nashville publisher corrected me on that line because of the word nothin’ — because its antecedent is somewhere in the previous line that the listener has already forgotten.” At least it’s a great two-stepper.

There’s no small irony, then, in Fulks’ reliance on a Nashville booking agency. He’s been opening shows recently for Junior Brown, including one on Austin City Limits, and soon will begin touring in earnest to build a market for South Mouth and a fan base to take to Geffen. Long believes Fulks can “create a great show and win people over…just by getting out and playing.” And Miller notes, “One of the things that doesn’t come across on the record is just how good his band is now. Tuey [Connell] is phenomenal, and Dan [Massey] is. behind [Mekons/Waco Brothers drummer Steve] Goulding, my favorite drummer in the city.” Massey has been with Fulks since the Trailer Trash Revue days.

Long after a January midnight, Fulks held 300 people at Chicago’s Empty Bottle spellbound with Merle Haggard’s “Sing a Sad Song”, his delivery rich with subtly shaded emotion. He climbed the “sa-a-ad-ness” with the authority of an Irish tenor. Moments later, his 6′ 5″ frame easily dominating the rock club’s stage, he turned his sidemen loose on a rave-up swing jam on dobro and bass fiddle. Getting into the act, the club’s lighting technician flooded the turning disco ball, and the dance floor surged.

Fulks took advantage of the climactic moment to stroll from the stage, across the room to the bar and back, allowing Connell and company to steal the show and the crowd for as long as it took him to refresh his drink. Picking up his guitar on cue, he then stole it right back with interest, and fearlessly. In the very next song, Connell’s banjo solo wowed the crowd yet again, but Fulks gleefully took him on, dukin’ it out for nearly five choruses. Indeed, the quality of his sidemen may the best testimony to just how much Fulks commands a show.

Albini says, “Robbie’s just an amazing songwriter, idiomatic issues aside….If there’s a classic mold for a guy who writes good songs, I guess he’s one of them.”

Skeletons bassist Whitney has the bottom line, though: “He’s a triple threat. He can run, hit and throw. He flat-ass thrills me.”

Linda Ray writes about music whenever she can get away with it. Gathering dust as a result are a few hundred copies of her Original Alt.Country Community(Wherever That Is) Cookbook. 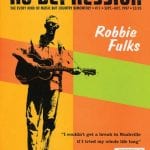