Reviews of New Music from The White Buffalo and Anders Osborne

Two new albums from a pair of songwriter/guitarists with righteous facial hair. The perfect soundtrack to Movember!

It’s been almost two years since Jake Smith, aka The White Buffalo, released his outstanding sophomore LP Once Upon a Time in the West. That album, along with a heavy touring schedule, has helped cement Smith’s reputation on the alt-country scene (contributing to the Sons of Anarchy soundtrack hasn’t hurt either). Shadows, Greys, and Evil Ways demonstrates that The White Buffalo is staying true to his muse, continuing to deliver gritty and honest — yet thoughtful — songwriting.

Shadows tells the story of Joe, a self-destructive outcast torn asunder by his inner demons and a tumultuous relationship with the equally fiery Jolene. Concept albums are an ambitious — and often ponderous — undertaking; if anything, Shadows occasionally leaves the listener wanting for more storyline and character development. But the devil is in the details, and Smith probably errs on the side of right in leaving something to the listener’s imagination. Thematic content aside, The White Buffalo maintains a consistent energy throughout the album; slow burners like “Shall We Go On” and “The Whistler” set the angsty mood, while rockers like “This Year” and “Don’t You Want It” provide a healthy kick in the ass to remind you that Joe is still alive and fighting. The band — which includes Matt Lynott on drums and Tommy Andrews on bass — strikes a rich sonic balance throughout, blending the textures of acoustic and electric instruments to maximum effect; I’m curious to hear how these tracks translate onstage.

Shadows, Greys & Evil Ways proves that we still have much to look forward to from The White Buffalo, and easily earns a place on my 2013 Americana best-of shortlist. 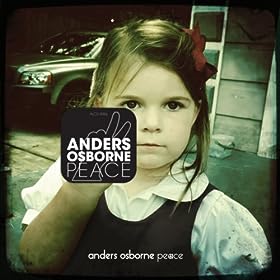 Jake Smith writes about the self-destructive outcast; Anders Osborne, in some respects, has lived the life. Fortunately, the Swedish-born, New Orleans-transplanted songwriter/guitarist has managed to find something resembling peace in recent years, kicking drug addiction and finding a more constructive outlet in his music. As the little girl flipping the birdie on the cover of Peace suggests, Anders nonetheless still has plenty of inner fire.

Osborne is still at his best when he summons that fire, as evidenced on the fuzz-heavy Neil Young-inspired title track, or the politically charged sludge rock-funk of “Five Bullets.” The man is a mean blues-inspired picker, and it would be nice to hear a little more riffing (perhaps a live album is in order, hint hint). The life-retrospective “47” reveals that Anders  is still grasping for something more — “nothing happens,” he repeatedly laments. Numbers like “Windows” and “I’m Ready” fumble for a more radio-friendly sound, suggesting that something may be wider recognition. However, Anders Osborne would do well to just continue being himself — an eclectic songwriter and primal guitarist channeling the diverse musical crossroads of his adopted home.

This review was originally posted on New.Old.Stock — A guitar music blog.

BONUS TRACKS: Dolly Addresses the Cowards and The Bottle Rockets Call It Quits