Reviewing the Instrumental Blues of Tinsley Ellis and Ronnie Earl

The blues is first and foremost a vocal tradition, but the guitar has played a prominent role in defining the genre’s sound. Recent instrumental releases from Tinsley Ellis and Ronnie Earl put the instrument front and center.

Get It! by Tinsley Ellis

Tinsley Ellis is known for high-octane blues rock, so long-time fans may be a little surprised by the more restrained vibe of Get It! Not that this is a bad thing; by holding back on the pyrotechnics and focusing on a more melodically-informed approach, Ellis harkens back to a time when instrumental tracks occasionally broke into the radio mainstream. It doesn’t seem much of a stretch to suggest that Get It! is an album tribute to Ellis’s 6-string heroes. It’s implied by tracks like “Front Street Freeze,” in which trebly bends summon the Iceman himself (Albert Collins); “Freddy’s Midnight Dream,” a King-approved slow blues; and the double stop shuffle of “Berry Tossin'” (as in Chuck). Rather than loosely conceptualized jam tracks, Ellis manages to deliver ten distinct tunes — no small feat given that the primal 3-chord structure of the blues isn’t necessarily the easiest format for creating musical variation. Get It! is a fun album that demonstrates how Ellis has managed to not just learn from those who came before, but channels them in making his own musical statement. 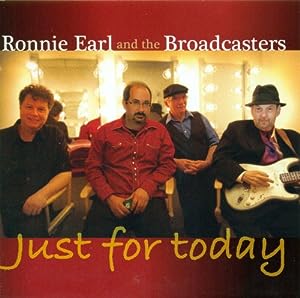 Just for Today by Ronnie Earl and The Broadcasters

Ronnie Earl is the rare bluesman who has managed to forge a career primarily as an instrumentalist, and his output over the years has reflected a great deal of stylistic diversity,  blending in elements of jazz, R&B, and even world music. Earl is a more cerebral and introspective player, reflected in his preference for slow blues — which honestly is the weakest link of his latest live album. Just for Today would benefit from the omission of a couple slow burners and the addition of a few more high-energy romps — see “The Big Train” and “Robert Nighthawk Stomp” for examples of how the man can tear through a roadhouse beat. That said, few can deliver like Ronnie Earl on a down-tempo number, as evidenced by the soulful tribute of “Blues for Hubert Sumlin” and a Latin-flavored interpretation of John Coltrane’s “Equinox.” Just for Today may not be quite as satisfying as some of the guitarist’s studio albums, but it’s certainly instructive on how to squeeze every ounce of soul from a Fender Stratocaster.