Review: The V-Roys “Sooner or Later”

Hailing from Knoxville, Tennessee, and led by chief songwriter, guitarist/vocalist, Scott Miller, The V-Roys were once Steve Earle’s prodigal sons and with the release of the compilation, Sooner or Later, it’s easy to see why. Pioneers of early alt-country, The V-Roys stand alongside bands like The Bottle Rockets, Whiskeytown and Uncle Tupelo, in having found a perfect blend of 90’s alternative rock and country. With an exceptional twang sensibility and Southern tinged vocals, it’s a wonder this band was only around to create two studio albums. 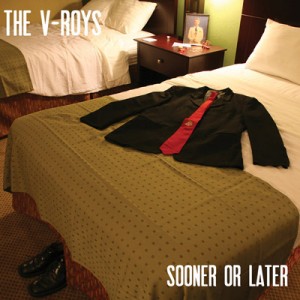 Produced by Steve Earle and Ray Kennedy (who at the time called themselves “Twangtrust”), Sooner or Later revisits tracks from the V-Roys’ Just Add Ice (1996) (a play on their former name, The Vice Roys) and All About Town (1998), both of which were released on Earle’s E-Squared Recordslabel. Though tracks like the mandolin charged, “Mary” or Celtic inspired, tin whistle filled, “Over the Mountain” make it clear that Earle’s influence is there, The V-Roys, stand out as a distinct creative force, despite having been groomed by the master of hillbilly-infused rock.

Featuring none other than Earle on Vox-Mando guitar, “Amy 88” encompasses the band’s signature, Danelectro-driven sound, which is a combination of almost punk-like undertones, offset by shiny, jangly guitar riffs. But the V-Roys prove their versatility with the ballad like, “Lie I Believe” and mid-tempo, “Fade Away” and “Pounding Heart,” which demonstrate their keen ability to turn toward the softer, melodic side.

Like many of their peers and predecessors, the V-Roys take their country influence with a shot of self-deprecation. No better example is the witty, Hank Williams style, tongue-in-cheek drinkin’ song, “Cold Beer Hello,” which turns into something of a performance art piece, with a sloppy guitar solo that simulates the effects of too much alcohol and the fun in keeping a carefree, youthful attitude.

Though the band’s output was short-lived, Sooner or Laterproves that The V-Roys were a unique force whose artistic merits should put them in the company of the best artists of their time. With catchy cuts like the album’s title track and the wobbly, soaring “Kick Me Around,” the re-emergence of this band should certainly find them at the forefront of any alt-country enthusiasts playlist. But unlike many other groups from the era, the V-Roys prove themselves successful in capturing a raw, stripped-down acoustic sound (“Mary”) that should earn them respect even from traditional country purists.

The V-Roys “Sooner or Later”