If there was a Country Mount Rushmore, Merle Haggard would be front and center. A man Johnny Cash called an “American icon,”the Hag’s two-stepped it up and gone back to the basics with his latest release, Working In Tennessee (Vanguard).

The Texas swingin’ title track sets the tone for an album filled with little more than brush snare, dobro and acoustic guitar. Its carefree coolness feels like a Sunday drive down Main Street with Grandpa. Well, that is if grandpa was a pot smokin’, Bakersfield Outlaw who could drink a whole fraternity under the table.

Of course, Haggard’s no stranger to partying. In his memoir, My House of Memories, he opens with a chapter entitled “The Party,” telling rowdy tales of life on his Houseboat up in Northern California. With the laid back Jimmy Buffet vibin’, “Down on The Houseboat,” the Hag recollects those stories of ” drugs, women, good friends, good music, and fun.”

In his senior years, Haggard has turned into a wise old truth teller. The flag flies as the eagle soars with the patriotic, social commentary, “What I Hate,” which will remind listeners exactly why there are beat up old trucks on the road with bumperstickers that read “Merle Haggard For President.” But unlike a politician, Haggard’s no BS. Keeping in-line with with last year’s simply stated, “I Am What I Am,” “What I Hate” finds him matter-of-factly confessing “what I hate is what I hate.” 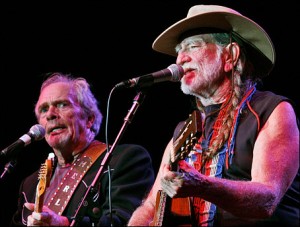 And what he loves is what he loves. The Hag lets it known by putting fellow legends on the country pimp roll-call, when he gives shout-outs to everyone from touring partner Kris Kristofferson to Hank Williams and Willie Nelson, in the ironically boogie woogie inspired, “There’s Too Much Boogie Woogie.” If it ain’t enough he “thanks God for Willie Nelson,” later on finds Pancho and Lefty reuniting to cover Pancho, when Haggard is joined by a joint smokin’ Willie for a reprise of his classic, “Workin’ Man Blues.”

Speaking of covers, the album features two jolly and jovial interpretations of the Johnny Cash classics “Cocaine Blues” and “Jackson.” Of course, if you’re Merle Haggard, you’re just about one of the only people around who has any business releasing one, much less two Johnny Cash covers. But Haggard is the real deal. He’s just making sure that even if his best buddy isn’t still around to jam, like Cash said, he still “values his friendship more than any earthly thing.” 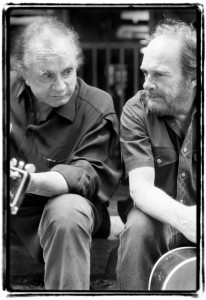 And although songs like the old school hurt ballad “Sometimes I Dream” may further reveal Haggard as a gentle old timer, the novelty track, “Laugh it Off” finds him advising listeners on a life philosophy that is delivered in a way that feels like Cheech and Chong set to music. Whether one is in jail or dying of pneumonia, Haggard suggests getting some “Humbolt Marijuana, guaranteed to make you cough and laugh it off. Ha, Ha.”

With that, Haggard proves he may be the only 75 year old who can can pull off mischievously chuckling after every verse of a song without coming across as creepy. Rather, he’s like an old friend whose ripened with age. So, take a tip from Merle: spark up a joint, pour a beer and spend an evening Working In Tennessee.

01 Working in Tennessee by Vanguard Records