There are certain artists whom I feel most music fans should have at least a passing familiarity with: Elvis Presley, the Beatles, Hank Williams, Robert Johnson, Johnny Cash, Woody Guthrie, the Ramones, etc. The list is debatable, of course, and I’m sure hard rock and heavy metal fans would want to add Led Zeppelin or Black Sabbath just as fans of hip-hop would want to include the likes of N.W.A. (in fact, fans of hip-hop would probably dismiss most of the list entirely; sadly, most of them have very narrow musical tastes and even narrower minds). Regardless, I doubt if anybody would include Marty Stuart or John Mellencamp on that list. Both are great, but they aren’t exactly icons on the level of the others I mentioned. Yet both of them will release albums this month that I believe should be required listening for every young musician. Not just because the music is great, but because of the way they were recorded.

Today’s music industry is undoubtedly in decline. Blame the rise of internet piracy and the death of physical music formats if you want, but when it comes down to it the fault lies with the music itself. New Kids on the Block and the Backstreet Boys were here long before Napster and bitTorrents.For years now vocal mistakes have been Auto-Tuned out of the finished product, missed notes were overdubbed, and basically the entire thing sounded far too polished. This is a horrible thing for music and is the real reason why it is dying. I don’t recall the exact quote nor the place where I read it (I’m guessing one of Peter Guralnick’s books on Elvis or Colin Escott’s history of Sun Records), but legendary producer Sam Phillips once said something along the lines of this: the greatest performances are rarely flawless in a technical sense and too many studio gimmicks almost always ruin a record. That is why young musicians need to hear the upcoming albums by Mellencamp and Stuart: to realize that is not about modern-day multi-million dollar recording studios with perfect acoustics (yes, even some indie artists are guilty of this), that its not about top-of-the-line vocal tuners that can make even Bob Dylan sound like Caruso, and that it’s not about catering to the lowest common denominator in hopes of having a hit record that will be forgotten about in a year. These two albums reveal that its about passion and a good sense of history, but mainly passion.

I’ve already reviewed the Mellencamp disc (read my review of it HERE), so now it’s time to take a swing at Marty Stuart’s Ghost Train: The Studio B Sessions, which will be released on August 24th. Like Sun Studios, where Mellencamp recorded the bulk of his album, RCA’s Studio B is now a museum and Stuart had to obtain special permission from the Country Music Hall of Fame in order to record there. In the ’50s, ’60s, and ’70s, it was the studio frequented by country’s biggest stars as well as Elvis Presley who recorded roughly 50% of his output there. It goes without saying that the studio has seen its share of great music and Stuart, who made his recording debut in Studio B in 1972 as the 12-year-old mandolin player in Lester Flatt’s band, makes great music live there once again. 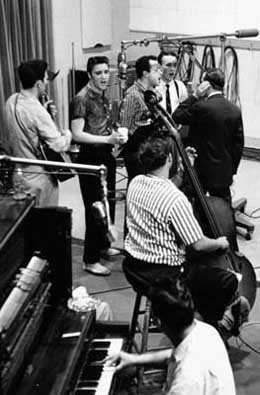 The album opens with “Branded” which could very well be a homage to Merle Haggard’s “Branded Man”. Of course, it’s not as great; for starters, Haggard lived it and secondly, Marty Stuart is no Merle Haggard as I’m sure even he would point out. With its shortcomings duly mentioned, I still must say that it is an excellent track that adds just the right touch of rock to its ’70s country feel.

“Country Boy Rock & Roll,” a cover of an old Reno & Smiley tune, follows and, given its past as a bluegrass number, it should come as no surprise that this one makes a fine showcase for Marty’s band, the Superlatives.

“Drifting Apart” is the sort of honky-tonk ballad that George Jones specializes in. As you can surmise from the title, the melancholy tune tells of a relationship on the edge of falling apart. A real highlight here, and for that matter the entire album, is the pedal steel playing of Ralph Mooney. This track is among the album’s best and makes for a bittersweet reminder of what Nashville was once capable of.

“The Bridge Washed Out” is another cover, this one of a 1965 hit by Warner Mack that went to the top of the country charts. Marty and the Superlatives give the tale of a wedding day gone awry a country-rock feel with some elements of classic Waylon Jennings thrown in for good measure. As with the previous cover, this number is ample proof that even with Stuart’s considerable skill as a vocalist, musician, and songwriter, his real strength lies in performing.

“A World Without You” is another classic-styled ballad, this one co-written by Stuart’s wife, Connie Smith. Mooney’s crying steel guitar is again a major highlight here as is Stuart’s vocal delivery which speaks to his near-encyclopedic knowledge of the history of country music that has allowed him to find his own style in the modern era while staying true to tradition. I must also mention the Jordanaire-esque background vocals that I imagine Elvis would have greatly approved of.

“Hummingbyrd” is another showcase for the Superlatives and especially Marty’s electric guitar playing. This time, as the title implies, that guitar is one once owned by Clarence White. This instrumental would make a great soundtrack to a high-speed drive down the highway and it does indeed sound reminiscent of the Byrds.

“I killed another man today,” Stuart solemnly declares at the opening of “Hangman,” my favorite track here. The song has late-period Johnny Cash written all over it and with good reason. Stuart, the former husband of Cindy Cash, spent five years as a multi-instrumentalist in Cash’s band and was also his next-door neighbor at the time of his death. Marty wrote the first verse following a visit to Folsom Prison and after sharing it with Cash, the two completed the song together. Four days later, country music lost perhaps its greatest artist but had it not one could easily imagine this song being a standout of American V. “Who killed who I’ve asked myself time and time again,” Stuart sings atop the stark, bare-bones arrangement, “God have mercy on the soul of this hangman.”

“Ghost Train Four-Oh-Ten” also has a feel reminiscent of Johnny Cash as well as Jimmie Rodgers. The biggest influence by far, though is the Elvis classic “Mystery Train.” But unlike the classic train songs of those legends, this one reflects our own modern society where “the trains don’t run no more.” There’s a supernatural element to this one that I really love and the band is really hot here on the tale of a ghost train that carries “gamblers, thugs, and thieves, and the likes of me.”

“Hard Working Man” is another stark, stripped-down acoustic tune and the wonderful lyrics speak for themselves, so I’ll just let them: “What will become of the working man with honest sweat on his brow?/Will the nation that raised him to build it gonna turn its back on him now?/Take away his pride and dignity, give his job to some foreign land/Here’s a question that needs a straight answer: what will become of the hard working man?.” Stuart is right that the question needs a straight answer and if you have that answer feel free to give it in the comments or better yet in a letter to your Congressman. I have no idea who Marty Stuart voted for and I really don’t care. This song transcends politics; it’s about a way of life and Stuart’s sincere delivery ensures us that he is not on the side of the corporate-run Republicans or the corporate-run Democrats. He is on America’s side; he is on our side.

“I Run to You” is a duet with Connie Smith that is reminiscent of Loretta and Conway or George and Tammy. It is a near-perfect love song and while I still can’t figure out whose idea it was to put strings on a hillbilly record, it really works in this case. Thank you Ray Price.

Speaking of Ray Price, when I first saw that “Crazy Arms” was on the track list, I cringed a little. It’s not that I don’t think Stuart could do a capable job on the classic, it’s just that the versions by Price and Jerry Lee Lewis are really all that we need. Luckily this is an instrumental version with the most prominent instrument being the pedal steel of Ralph Mooney, who wrote the song.

“Porter Wagoner’s Grave” is a recitation with a strong Christian theme. You don’t hear many recitations these days; not in mainstream Nashville, nor in alt-country, mainly because few can pull them off. Yet Stuart does a good job and the song makes for a great tribute to Stuart’s late friend and is an intriguing tale of how “On a dark stormy night, a lost soul was saved/Brought into the fold on Porter Wagoner’s grave.”

“Little Heartbreaker,” co-written by Stuart and Mooney, livens things up with its honky-tonk country-rock. This is the kind of song that Stuart became famous for early on in his solo career and he still performs this type of material as well as anybody in the business.

“Mississippi Railroad Blues” closes the album by finding Stuart going full circle. The song is the album’s second instrumental, this time performed solo by Stuart on the mandolin. The melodic piece is performed at a very fast pace and proves that he hasn’t lost his touch on the instrument that first brought him to prominence.

In conclusion, this is what we’ve come to expect from Marty Stuart: a solid collection of country tunes with a dash of rootsy rock and roll here and there. This time there is more of a focus on history than ever before and we get all of the classic country archetypes: the train songs, the prison songs, a duet, a few sad ballads, a gospel number, and even a few instrumentals. Marty Stuart is keeping the spirit of country music alive within Nashville. It’s a fight he can’t win, but he’ll go to his grave trying and as I stated at the beginning, all young musicians can take a lesson or two from this album.