Read This Book! It Still Moves by Amanda Petrusich

The full title of this road-warrior ode to Americana is It Still Moves: Lost Songs, Lost Highways, & The Search for the Next American Music. It’s an ambitious title, no doubt, but music journalist and author Amanda Petrusich has done her time on the road and has a powerful passion for the roots of American music.

In fact, Petrusich has nailed the holy grail of music journalists; she’s able to communicate her love of the music through her writing. It seems simple, but you wouldn’t believe how hard it is to explain why or how you love something without resorting to hyperbole, cliches, or marketing copy. That’s why many music reviewers (myself certainly included) spend so much time beating around the bush in their reviews. It’s simply too difficult to write out our thoughts in a way that is simple, but can also convey our love of the music to the reader. The best music writers, though, are able to weave their way through words to get at the magic that makes the music compelling. The best music writers are writers, not journalists, able to craft words into a visible picture that draws you in. Here’s a sample excerpt from the book that shows this ability of Petrusich:

“I stare at a series of chairs and doors, each meticulously hand-carved by John Jacob Niles, a Kentucky-born collector of American ballads and a famed, falsetto-wielding dulcimer player. Niles–with his high, supernatural pipes and meek strumming, his little round mouth and head of wispy white hair–is one of my all-time favorite players of southern American music, mostly because he is impossible to listen to and impossible not to listen to. His voice is just that strange.” Petrusich paints a picture of a mysterious voice housed in a mild body, an heir to an ancient and possibly disturbed tradition.

It Still Moves is both a travelogue and a selected history of various genres of American music. I think it succeeds at both, blending vignettes of her road trip with insider histories of the music. It’s simultaneously a love poem to the American road and a collection of fan letters and historical obsessions. As a music writer for Paste, Spin, Pitchfork, the New York Times, and more, she’s eminently qualified to critique American music. And she clearly knows and understands the open road, as in this excerpt:

“I am partial to actual maps over punch-and-print websites like MapQuest, which, I have learned, are occasionally wrong and generally loony (no one needs to know they’ll be on an off-ramp for twenty-nine feet) and offer little to no context or geographic perspective–Mapquest spits out highway numbers, but there’s no simple way of deciphering exactly which rivers you’ll get to cross, which mountains you’ll plow through, how close your vehicle will get to the Arkansas border, or which cities and towns and hamlets will speed by, hidden by off-ramps and highway trees.” 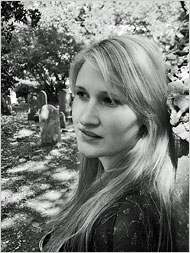 Living in Brooklyn, Petrusich drives forth to explore the music of the American South, arguably the heartland of Americana. She samples the local foods, chats up the local characters, and writes eloquently about the history of famous landmarks like Sun Records, Beale Street, and Graceland. But she also hunts down the people and record labels responsible for preserving or re-inventing Americana today. Her mission as stated is to find out “How are our collective ideas about Americana changing?” and though this means that she tracks back to the early days of Americana, looking into the legacy of the Lomaxes, the Carter Family, and early blues singers, she also races up to the present day, reviewing labels like Bear Family and Dust to Digital, and meeting with scenesters and musicians making music today. In one of the best chapters in the book, she manages, with the help of a number of excellent interviews, to deconstruct the mystique of the “indie-folk” movement, a strange, confusing and seemingly disconnected community of musicians.

Throughout, it’s refreshing that she’s not looking to prove something or to make a point, she’s just curious as to what makes the music and the community tick. Because of this, she’s able to get some excellent interviews with various artists. Talking to The Legendary Shack-Shakers singer J.D. Wilkes, she gets a particularly compelling quote from him “It all turned inward during the sixties–the folk singer and the rock singer became the new high priests, the new clergy. We all gathered around, sitting at their feet, as the pearls of wisdom fell from their mouths. And it became less about community and dancing with girls and getting to know one another and having a good time and leaving the place sweating and grinning from ear to ear.” And for each interview or historical aside, she’s also writing great little shorts about her time on the road. “Slurping cider and chewing hot apple donuts from a grease-stained paper bag, I flick clumps of sugar off my fingers; between bites I exhale sweet Virgina air.” It’s a great mix of well-researched historian and starry-eyed fangirl, a mix that other writers often try for and miss.

Surprisingly, It Still Moves has gotten a number of nasty reviews on Amazon. I’m not really sure why, and since I’m a pretty low-rent expert on American music, I can’t really speak to how accurate and insightful the book really is. I did notice a few errors or omissions in the book, and may have noticed more if I was a more devoted student of Americana, but honestly I couldn’t care less how accurate her facts are or how “clever” her insights. She’s a wonderful storyteller, and that’s all I look for in a writer.

Teaching a course on American Popular Music (despite being unable to recognize a single song from Sonny & Cher), I quickly realized how uninteresting and useless the truth was. History’s not about cold facts, but about warm stories, stories that make the characters come to life. Petrusich knows this well, and because of this, her book never ceases to entertain and inspire.

BUY THE BOOK on Amazon, and check out this fun interview w/Petrusich from NPR

Also, here’s an interesting debate on the merits of the banjo. (Petrusich is the pro-banjo expert)

This post originally appeared in American Standard Time. Curated by Greg Vandy (The Roadhouse on KEXP), AST is one of our favorite blogs. Stop by for a visit!  –Devon Leger of Hearth Music