Ray-Bans, Music, and Popular Culture: Bob Dylan and Peter Capaldi as Doctor Who

On Halloween eve, the BBC posted a new promotional photo of the current Doctor Who, Peter Capaldi, wearing the Ray-Ban Wayfarers that have become not just an iconic, but a crucially sonic, part of his persona as the Twelfth (or so) Doctor.

It struck me just how much Capaldi’s hair — oft-discussed on “Doctor Who” — and his Wayfarers seem styled exactly in imitation of, or homage to, Bob Dylan, circa 1965-66 and Dont Look Back.

Capaldi’s Wayfarers have an added edge in the current season of the show.  He was first seen making an entrance, looking so dandy and so fine, wearing them while playing rock and roll guitar:

The sunglasses were soon revealed to be the latest incarnation of the Doctor’s “sonic screwdriver,” one of the character’s most familiar props over the decades since making its debut in the hand of Patrick Troughton in 1968.

What do you think, friends?  Has Doctor Who picked up a little touch of Dylan?  Happy Halloween. 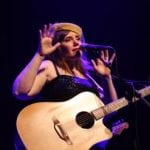 A Magic Moment to Be Forever Lost in Time