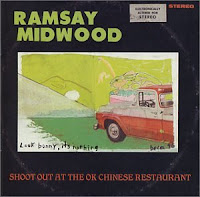 I hate to commit one of the most overused cliches of music “criticism,” the forced paradox, but it just seems too damn appropriate here. Texas singer-songwriter Ramsay Midwood’s music is at once highly idiosyncratic but also as familiar as a bad habit. His bluesy, rootsy romps instantly start your head bobbing as his bizarre lyrics full of rich, Southern Gothic visuals set your imagination flowing. I discovered him recently through the wonderful Americana Internet radio station, Boot Liquor, while toiling away at my day job. After doing some research, I’m a little shocked his work is apparently so little known. His only two albums aren’t new releases, but I still felt compelled to offer a review of his work. Knowing something this interesting crawls so low under the radar makes the world feel a little more mysterious, as does Midwood’s music. (I’m sure many here in the No Depression community have been hip to Midwood for a long time; please bear with those of us who are late to the party.) The best description I can think of for Ramsay’s work is gospel music for inspired barflies.

Let me now move on to another well-worn critical cliche, the “sounds like the lovechild of…” comparisons. Take a healthy dose of John Prine, a dollop of Bringing It All Back Home electric Dylan, a pinch of early Tom Waits, a sprinkle of Charlie Poole, and a splash of Lightnin’ Hopkins. Now, get them all a little drunk, worn out, and charmingly cranky. The result might be as intriguing as Midwood’s first album, Shoot Out At the Ok Chinese Restaurant.

Shoot Out At the OK Chinese Restaurant

Shoot Out is decidedly lo-fi, swampy, and feels as authentic as a country preacher stoned on truth serum. It’s a study in country-blues guitar and piano/keyboard riffs rounded out with a little banjo, harmonica, and fiddle all backed by a soulful but spartan drum kit. Midwood’s eccentric songwriting, delivered in a lazy-as-molasses, self-assured drawl over honky-tonk blues are irresistible in the highlight of the album, “Spinnin’ On This Rock”:

Spinnin’ on this rock; I’m lookin’ for a clock
I hope I don’t get fired from my job at the dock

If I get fired, you know that I’m so tired
Sign that paper, and I’ll gladly retire

Then I’ll have some fun, I’ll go and grab my big ol’ gun
I’ll shoot at my friends and a-watch them run

And then I go to church, and feel me up a nurse
And dream about the lady in the alligator purse.

I could listen to that one verse on repeat for most of an afternoon. This combination of plain spoken surreality backed by such funky, lethargic syncopation is compelling as all hell. It’s kind of like that first realization that you’re getting unexpectedly drunk – the tiniest bit disorienting but also a little exhilarating. The feeling abounds throughout Midwood’s work.

Popular Delusions and the Madness of Cows

His second album, Popular Delusions and the Madness of Cows, was released in 2006. It sounds a little more professionally produced, but still just as earthy, deranged, and expressive as his first. The album is a little more mellow throughout but is also filled with backwoods anti-heroes, back porch anthems, and Midwood’s reedy soulful delivery up front. His voice, both literally and figuratively, is unique in its humble confidence. In both his lyrics and his music, the listener gets a varied but cohesive blend of American roots music with an occasional flourish of slightly dissonant chord changes, as in “Ringmaster,” the first track on Popular Delusions. Midwood’s personal biography might have something to do with his music’s rootsy diversity.

According to a now-removed bio on Amazon, Midwood was raised in Arlington, Virginia, the son of a tuba-playing father and a mother interested in folk and roots music. He then moved to Chicago to pursue a career as an actor before moving to Los Angeles to appear in a beer commercial, where he recorded Shoot Out at the Ok Chinese Restaurant. He later moved to Austin, Texas where he lives now. It’s easy to imagine the confluence of all of these regions influencing Midwood’s distinctive music. Whatever the recipe, whatever the origins, the result is a delicious stew of extraordinary (if overlooked) American music.
____________________________
Postscript

I only recently started blogging here at No Depression. I published the above piece on my personal blog back in April, but I wanted to re-post here at ND. As a result, I contacted Midwood to see what he’s up to these days and to see if a new album might be in the works. He told me he has a “1/2 machine” in the garage and has been working on something he hopes to finish by the Spring or Summer. A man after my own heart – recording analog reel to reel in his garage. So that’s where the magic comes from…

From what I can tell, Midwood sticks close to his home base in Austin. I asked if he had any plans to gig outside of Texas. He told me that he just returned from Tulsa and hopes to do some runs through the Southeast. He mentioned possibly Mississippi, Florida, and Alabama. “No major touring,” he said. “… just weekend runs ….got a couple of kids who are in elementary school so that takes up a lot of my time…in a good way.”

I hope to do an extended interview with Midwood in the future. I’d love to get some details about his future plans and a little more background on his history. If anyone’s interested in hearing more about Midwood, or if you have some of your own anecdotes, stories, etc., please let me know know through email or the comments below. Thanks.