Summertime brings the mega tours to stadiums, arenas, and sheds across the country along with the growing number of festival dates.  Now if you’ve never seen the Rolling Stones or U2, by all means get yourself a ticket and go … no questions asked.  For me at this point of my stub collecting days, the smaller the venue the better.  There is something about the intimacy and connection in a small theatre, hall, and tavern performance that can still push the adrenaline.  Maybe not on the scale of Bruce Springsteen or Ryan Adams, but for what two decent Stones tickets in the lower bowl run, it can cover a year’s worth of shows AND the beer tab.  So as America’s pastime is closing in on the halfway mark, I’m going to be scouting the junior circuit of singer/songwriters barnstorming their way to a joint or dive bar this summer whose gaining admirer’s and fans along the way.

I had the pleasure to catch up with the Brooklyn based sextet Spirit Family Reunion playing in Cleveland at Mahall’s 20 Lanes.  Yes, this little gem has a 90 year old history that now is part hipster bar, part bowling alley, and part indie concert space.  Touring behind their April 2015 release Hands Together, the group is making a push to get to the next level with the help of INgrooves Music Group and the good folks at Conqueroo.  Though the band is led by lead singer/guitarist Nick Panken, the wealth of talent is spread around with Stephen Weinheimer (washboard/lap-slide guitar) and Dylan Harley (drums) each spotlighted singing on several numbers.  Adding harmonies throughout the seventeen song set were Ken Woodward (bass), Noah Harley (fiddle), and the lovely Maggie Carson (banjo) all gathered around Panken’s microphone. 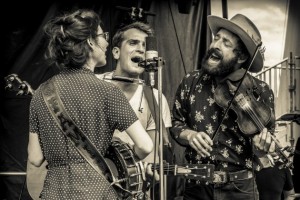 The group, which began by busking at New York City subway stations, farmer’s markets, and street corners, released their self-titled and self-produced debut in 2010 followed by No Separation in 2012.  Their American folk old tyme roots sound has hints of Woody Guthrie dustbowl and Avett Brothers newgrass is finally gaining some momentum with their lead single ‘It Don’t Bother Me” from the new record. Opening the night with “I Am Following the Sound”, the band blended highlights from their catalog including the gospel laced “No Separation”, “The Night Replaced The Day” featuring Carson on banjo, the sentimental ballad “To All My Friends and Relations”,  and their take on “Rag, Mama Rag” from The Band.  It was nice to put faces to the songs as “Wake Up Rounder!”, “Fill My Heart With Love”, “Once Again”, and “All The Way Back Home” from Hands Togethergave me a new perspective on Spirit Family Reunion’s chemistry. The relationship with the audience culminated with the band stepping down from the two tiered risers onto the floor singing “I’ll Find My Way” surrounded by the faithful.

It will be interesting to catch up with Spirit Family Reunion in September at the Americana Music Association festivities to see how high their stock has risen.  There will be many more shows and legions of followers prior to their gig at The High Watt, located in the epicenter of the nightly AMA showcases with The Cannery Ballroom and Mercy Lounge. One thing for certain, my vinyl shopping list for Nashville begins with SFR records.

BONUS TRACKS: Some Thoughts on Spotify, The Real Lady A, and More