Pokey LaFarge and the South City Three are Still At-Large

Sometime over the last 12 months, between the summer of 2010 and 2011, after the release of one of the best Americana albums last year, Riverboat Soul, Pokey LaFarge has found his way to the international music scene. When I talked with him briefly last month, he had just come off a successful six-week European tour. Last year, we talked while he was on the road, between St. Louis and Texas. At that time, he was on his way somewhere, he wasn’t sure where, but he knew he wanted to spread his music everywhere he could. I’d say he’s accomplished that goal. Today, he’s appeared at the famed Newport Folk Festival for two consecutive years.

He has also spent six weeks in Europe, then a U.S. summer tour and now he’s back in Europe again for another tour. In our previous conversation he was a ragtime gospel evangelist hoping to spread the good news of music rooted in the styles of the 20’s and 30’s jug band and country tinged jazz updated with new songs and a passionate polish of originality and energy. His skill matches his speed and his band follows along, sometimes leads, always bouncing to their own tight, steady rhythm.

Since our first conversation Pokey has found the favor of the readers and writers for No Depression including an interview with featured contributer Chris Mateer and a recent review of Pokey’s new release, Middle of Everywhere. Kyla Fairchild gave Pokey a strong nod at 2011’s Folk Alliance. His videos have been uploaded and featured by the dozens on No Depression over the last year. It seems, Pokey has become our favorite son. And rightly so. If any artist comes close to breaking out of the old timey label creating his own sound, which comes as close as anyone I’ve heard in helping to define Americana through his blend of jazz, country, ragtime and jug band music fused with the energy of the best of bluegrass, it’s Pokey and the Southside Three.  He has his hands deep in the roots of the music, but he makes it grow vital and new.

What was most notable  during our short interview was, while this year Pokey’s seen some serious road and success, he has that artistic temprement that can’t settle on his latest accomplishment. His new album, Middle of Nowhere, is a strong follow-up to Riverboat Soul, taking things a bit further with horns and continuing his string of original songs that breathe with lyrics of love, heart break, good times, bad times and everything in between. But, the clear message he sends to fans is that for him, as an artist and musician, the best is still yet to come. He’s still growing, changing and trying new approaches, digging deeper into his Americana roots to find new layers of the musical forms that he is intent on growing.

So, this little conversation is but a pit stop along his own highway to success. And it seems very likely we haven’t heard the last of this Riverboat Soul inside this restless 28 year-old talent.
Terry: So, you just finished a European tour.
Pokey: It’s one of the best we’ve ever had. It was for six weeks. We went to Holland and England and Ireland.

Terry: How were the audiences compared to America?

Pokey: Well, you know, the UK can be kind of stuffy. People here know how to respond to the music. Some can even dance to it. Over there, they need a lot more booze to cut loose.

Terry: Tell me about the new album? 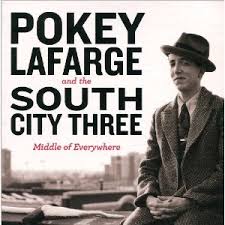 Pokey: Middle of Everywhere? I don’t have anything profound to say about it. It’s kind of in between stages. I go in looking for a different sound. Some of the songs I’m happy with, some not so much. We added some horns, which was different from Riverboat Soul. But you try to get the sound you can out of what you have. We didn’t do anything unnecessary. We played mostly live in the studio. No frills or fancy stuff. We cranked it out in three days. The only overdubs were the horns, which were done in New Orleans. But, I feel like we have a better record in our future.

Terry: There’s so much labeling in today’s music. How do you define Americana music?

Pokey: To be quite honest, I have no idea. I couldn’t tell you. At one point, when I was younger I thought it was electric music coming out of Texas, Tennesse and Chicago. Now they seem to use that term for me. But, you know the best people don’t classify. You can’t classify them. You can say, it’s from St. Louis and that’s not really a genre. But, everyone wants to come up with names to classify. My favorite artists didn’t worry about genre, they were innovators, like Bill Monroe and Jimmie Rodgers. You know, they were just original.

Terry: Which brings up the point of your sound. I find you to be highly original with blends of various sources from jazz to bluegrass.

Pokey: Original? I guess, I would say so, if you want to say creatively, definitely, and that’s the most important thing. Without that you got nothing. With this past year I’ve been listening and writing constantly. I’ve got tons of songs. I’m looking forward to learning more about the music, adding more layers. But, at the same time, we’ve been asked to play Newport Folk Festival for a second time which I don’t think happens that often.

Terry: How did you get connected with Jack White?

Pokey: It was thanksgiving and on WSM they were playing Thanksgiving related songs. They played a song off of Riverboat Soul and Jack heard it. He gave me a call and wanted to know if I’d come down to record.

Terry: One thing I’ve experienced and wondered if you’ve felt the same: It seems in this music, there is this core of warmth and it seem to attract really good-hearted people, both working in the industry and fans.

Pokey: You know that’s an interesting point. You can relate the music to a certain kind of mindset. It’s in the tone of the music. It has an earthy tone that enriches the soul and gives a warm feeling. You know, when you listen to techno or electronic music, I don’t think it soothes the soul in the same way. I’m not saying it doesn’t. But, the people are the music. If people are going to enjoy music I do, we’re going to have similarities. Music says everything about a person or it says nothing at all. You can see their intentions and intentions are important.

Terry: I’ve recently been reading the biography of Townes Van Zandt. He believed in living the song. It had be a part of your life experience. Some writers go with total imagintation. How do you write/

Pokey: Living the song, I’d say that’s true. I haven’t been able to write anything that’s totally thought up or imagined. It’s true stories I write.

Terry: So what does the future hold for you and the Southside Three?

Pokey: I will say this. The best is yet to come. We got a good thing going on and we enjoy being on the road, but I’ve got tons of songs. You know I just turned 28 and I don’t think I hit my peak. I want to get my tenor banjo down. We’re adding a little more slide guitar so we can do blues and country. Hopefully, we’ll have a lap steel as well. I’ll keep writing and eventually produce my own songwriting. For the next album I’ll call on other professional musicians. That will add some more layers to what we do.

Terry: How’s the musical rapport with your band?

Pokey: I don’t direct the instrumentation. I let them do what they do. I really want to make a great live sound in the studio. But, I’d like to get some more instrumentation and texture in our studio recordings. There’s a lot of different things we want to do. We’ve just started!