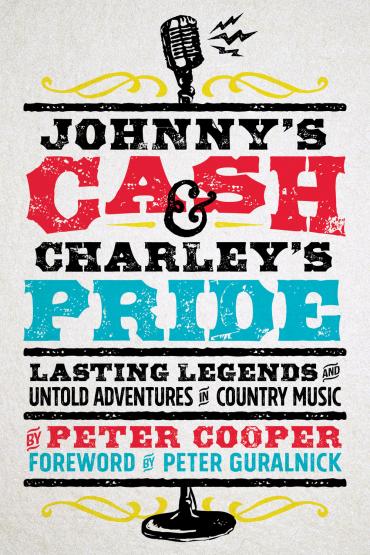 Peter Cooper, the Senior Director, Producer, and Writer at the Country Music Hall of Fame, hits home runs every time he steps up to the plate. When he was covering music for the Tennessean, you could count on Cooper to deliver humorous, perceptive tales of country musicians and their foibles. It’s not too much to say that Cooper is the Shakespeare—okay, maybe the Faulkner—of country music writing, for he’s able to tell a tale of sound and fury with a wink and a nod to the ragged ways that musicians and songwriters hold it together through the shadows, valleys, and peaks of their lives. In his entertaining and illuminating new book, Johnny’s Cash & Charley’s Pride: Lasting Legends and Untold Adventures in Country Music (Spring House Press), Cooper takes us into the lives of some of country music’s greatest characters, as well as some of its less-sung heroes. Here you’ll find wry and poignant tales of the moments that Cooper has shared with Kris Kristofferson, Merle Haggard, Porter Wagoner and Robert Hunter (who meet up very briefly in Wagoner’s dressing room at the Opry), Taylor Swift, Loretta Lynn, Lloyd Green, Don Light, and Ann Soyars, among others.

In an adroit chapter on “storytelling,” Cooper tells the story of Bob Dylan’s “wobbly dismissals” of Tom T. Hall in a 2015 MusiCares Person of the Year Speech. Dylan’s words, however, aren’t the memorable ones; Hall’s response is priceless: “There’s a difference between me and Bob Dylan. Dylan’s career was based on imitating legendary folk heroes … he made a career of imitating old folk singers, and today he’s a phenomenal success who has become an old folk singer. He became what he most admired. He’s a product of a subscription to another culture and another time. I invented myself.” Hall’s genius, Cooper writes, is “born of excavation; straight, no chaser. Dylan is a cocktail. Hall is a shot.”

In May 2013, Nancy Jones asks Cooper to write the words for George Jones’ headstone. After agreeing to do so, he has no idea what to write—after all, he writes, when you “search an acre of marble, you won’t find one delete key.” So, Cooper stays up late one night, playing Jones’ records loud, and writes the first things that come to his mind, ignoring the delete key: “George Glenn Jones is the king of broken hearts. He sang of life’s hardships and troubles, in a way that somehow lightened our own. His voice was effortless and unforgettable. He brought unsurpassed emotional eloquence to every song he sang. He was the soul of country music, and he remains the soul of country music. No one will fill his shoes. He is at rest, but his music is alive and ageless: he gifted it to all of us, to the joyful and the broken. ‘Walk Through This World’, he sang, and we do.”

As Cooper points out, though, Cowboy Jack Clement is the reason for this book. Cooper takes the book’s title from a Cowboy Jack quote: “If I had Johnny’s Cash and Charley’s Pride/I wouldn’t have a Buck Owens in my car.” Cooper reveals Clement’s genius by revealing his 10 rules for songwriters, which include “remember that the experts are often wrong”; “experts don’t buy records”; “a good song gets better with age”; and “reveal some of yourself with most of your songs.” Cooper shares some of Clement’s most enduring wisdom in the liner notes that Clement transmits through Cooper for his last album, For Once and For All, which was released posthumously: “Don’t ever sit and try to figure out all of the answers. You don’t have to. I already figured some of them out … No matter who you are, remember that whatever may be wrong with the world, at least it has some good things to eat … As Shakespeare must have said at one time or another, ‘I could have said that better if I had wanted to.’”

In perhaps the most revelatory moment in the book, Cooper reveals his approach to his own music writing: “As a music writer—and I would suggest this is true of the vast majority of writers—I am here to say that objectivity is the mortal enemy. Now, for sure, you need a good bullshit detector, and you shouldn’t rant, and you shouldn’t cheerlead. But objectivity is dispassionate. And we’re in the passion business. We’re trying to make people feel something different than what they felt before they read our words. The only way I’ve found to do this is to feel something before I write my words, and to feel something while I’m writing.”

And this is just the kind of gift you receive in this book: Cooper never pulls back; he shares humor, anger, love, bemusement, as well as the gut-punching devastation he feels when Johnny Cash and George Jones die. If you want the Grand Tour, there’s no better guide than Peter Cooper, and the winsome tales in this book serve as his map for you.

Peter Cooper and I chatted recently about his new book.

Why did you write this book now?

Peter Cooper: Matthew Teague, the publisher at Spring House Press, had approached me with a different idea, and I wasn’t sure I could do that. When I told him, he asked me to think about what I might do. I’d sit down and write; I’d prompt myself by looking at older stories I’d written for the Tennessean where I’d tried to convey what it’s like, for example, to be called from George Jones’ hospital room. I take people into the writing process, and give them insight into music people. I wanted this book to be like if I was at a bar and someone asked me to tell them some music stories. The pieces in this book are a lot like my approach to interviewing. I never go into an interview with a list of questions; I want to have a conversation. I want to be listening rather than paying attention to a list of questions. Of course, that’s not the way the paper wanted me to do it and it took me a few years to figure out how to go and interview the person and write it the way I wanted.

I don’t like writing; I enjoy when the writing is over. I started writing songs before I was even trying to write stories. The first time I ever wrote by choice was the time my English professor at Wofford College, John Lane, got sick, and he asked me if I’d go up to Asheville from Spartanburg to review a Guy Clark show for him. After I turned in the story—and I write about this event in the book—the editor asked me if I’d be interested in writing more. When I was teaching middle school, I’d go into the teachers’ lounge and do these credit card calls; it would cost me $40 to call Kevin Welch from the lounge for a story that paid $25; made sense to me. (Laughs) Then I started coming to Nashville to do interviews. I’d try to get into a room where all these music people were and not be an asshole I was lucky to be interested in this branch of music already. Writing about these people gave me a different access to them and a different understanding of them.

What books shaped you as a writer?

Peter Guralnick’s Lost Highway: Journeys and Arrivals of American Musicians: There is no great writer who’s come close to him as a great researcher and no great researcher who’s come close to him as a great writer. Frye Galliard’s Watermelon Wine: The Spirit of Country Music; this was one of the first serious books I read about country music and the people who make it; he covers everybody from Bill Anderson and Dolly Parton to Johnny Cash and Loretta Lynn and Vince Matthews. One of my favorite lines from the book is “Vince Matthews and his Budweiser stumbled into the alley.” Both Peter and Frye wrote about the people truthfully and accurately, but reading the writing in both of these books is a lot like staring into the sun.

Peter Guralnick wrote the foreword to the book.

Yeah, before we even sent it to him, Peter asked me what kinds of things are in the book, and he asked if Don Light was in it. He told me I absolutely had to write about Don Light, and when Peter Guralnick suggests something you know you have to listen, so I wrote about Light; Don Light had a lot to say but not many people listened.

If you could invite five writers, living or dead, to lunch, who would they be?

I’d invite Peter Guralnick and Frye Galliard. Larry McMurtry: I have gone through McMurtry the way that George Jones would tip a bottle in a bender. Rodney Crowell: When I read his memoir, Chinaberry Sidewalks, I was dumbfounded by the stories he told and by the words he used to tell them. William Faulkner: He’s a source of fascination to me; you know, writers tell Faulkner stories the way that musicians tell Bill Monroe stories. Ann Patchett: Not only is she a great writer but she opened Parnassus when Davis-Kidd closed down so this city would have a great bookstore.

Do you have a favorite bookstore?

I used to love to go to City Lights particularly to feel the history. Parnassus in Nashville. My favorite library is right here at the Country Music Hall of Fame; we have every word ever printed about country music.

Who are your models for writing?

In addition to Guralnick and Galliard, I am flabbergasted by Woodward and Bernstein and the level they worked at. Celestine Sibley, who wrote a column for the Atlanta Journal-Constitution. Thomas Boswell, a newspaper columnist who wrote about baseball—the best sport to write about—for the Washington Post. His main thing wasn’t getting you inside access but explaining the game from a new perspective.

What’s the one book you couldn’t live without?

Alanna Nash’s Behind Closed Doors: Talking with the Legends of Country Music. It’s a book of interviews with, among others, Bill Monroe, Steve Earle, Rosanne Cash, Rodney Crowell, Dolly Parton, and Tom T. Hall. Alanna’s questions are so artful and perceptive, and the answers she gets are revelatory. I use it as a model for how to talk to people.

What do you hope readers take from your book?

I’m trying to convey these people’s personalities. I want people to feel like they have been introduced to these people. I’m hoping to pass along some of these people’s wisdom. One of the reactions that I was most heartened by was Charlie Worsham’s; he told me that reading the book was like sneaking past the guards at the Country Music Hall of Fame and having the ghosts of these people talk to you. You know, I also hope that people will understand that folks who aren’t famous are just as important as the people who are famous: Don Light and Ann Soyars are two of the greatest enablers of music.