Paul Burch is one of those artists who I love because he brings a unique sound and perspective to everything he records. Whether he honors Southern soul, Buddy Holly, or, most recently on Meridian Rising, imagines a musical autobiography from the perspective of Jimmie Rodgers, the Father of Country Music, all of  Paul Burch‘s albums are terrific.

Paul Burch: I came to Nashville in 1994 to make records. I thought that was an honorable artistic motive. I ran into a talented and troubled fellow called Greg Garing who was starting a honky-tonk band performing late ’40s and early ’50s country in the upstairs room of Tootsie’s, a bar where writers like Willie Nelson and Roger Miller used to hang out.

I joined and became Greg’s bandleader and horse whisperer on stage — making setlists, helping with arrangements. I also started doing a lot of the singing. Kenny Vaughan was our lead guitarist. Paul Niehaus — of Lambchop and later Calexico — had just started learning Hawaiian steel. The band was just guitars and upright bass. It was a beautiful sound.

John Prine and Lucinda Williams came to our first gig. Lucinda scratched the hell out of my guitar that night but she was lovely — as she still is. Lines started forming out the door every weekend to see us. After about 6 months, that band imploded. The bar owners were tough people. There were drug dealers and all kinds of mean individuals lurking around. So I took Paul with me and formed the WPA Ballclub. A French label called Dixiefrog helped me record my debut, Pan American Flash, which was made for about $1,000 in two nights. Chet Flippo, the editor of Billboard (and formerly of Rolling Stone), heard my album and put me in his cover story about alt-country. Thanks to Chet’s feature, a label in Chicago called Checkered Past leased it for the US. It didn’t sell much, but it got a lot of attention and made Amazon.com’s best albums of the decade in pop and country. I was in the business.

Scouring for future bandmates, I met upright bassist Dennis Crouch downtown working at Tootsie’s. He had just moved here from Strawberry, Arkansas. Dennis became my co-producer. We’ve made about 10 albums together while he’s simultaneously become the Grammy-winning studio bassist for dozens of T Bone Burnett productions. Dennis is the best of his generation — a generous and gifted musician. I met Fats Kaplin around the same time. Fats and Dennis have been the core of my group ever since.

As for the business, it was sour on Americana until Raising Sand — which Dennis played bass on. It’s a great album, of course, but not that dissimilar to some of the WPA Ballclub records with the mighty exception of the wonderful Alison Krauss and Robert Plant. That was the first album that proved the concept had commercial viability.

There’s a story about when Brando was looking for his first Broadway play, he sat in someone’s office in his jeans and bomber jacket (unheard of in the late ’40s) — said nothing — just sat there, making origami paper dolls while someone else did the talking. The fellow behind the desk assumed Brando must be some kind of genius and signed him. That’s how you make it in any business like this. You have to smuggle your way through and tread carefully. The less you say, the better off you are. Maybe I said too much.

What do you do now?

I’m still a recording artist. And if the phone rings, I usually follow the line.

How do you describe your music and or songs to someone who’s never heard you?

I suppose I sound like a transatlantic radio station run by a renegade always on the move, with one eye on my back and the other on the door.

I was born in the ’60s and grew up on a farm close to Washington, DC. I was surrounded by music — jazz, 78s, bluegrass, rock. But there was nothing written about it so I heard music as it was — with no preamble. My first two records were Revolver by the Beatles and John Prine’s debut, which I got when it came out. I was 4 or 5. At that time, rock and roll was discovering country music, and the contemporary albums of the time, such as James Taylor’s Sweet Baby James, Bob Dylan’s Greatest Hits Volume 2, The Band, Rolling Stones’ Sticky Fingers, and many others, were very country influenced. But I never thought of myself as country or roots. I play rock and roll — which means singing what you like from your soul.

Who are your favorite artists of all time?

Probably the artists that Sam Phillips of Sun Records and Tom Dowd of Atlantic recorded. The sound of those records is my favorite and creeps into my production style — though my take on it is more as if you were hearing it from a block away. I love Howlin’ Wolf, some of the early B.B. King sides like “She’s Dynamite,” Elvis’ “That’s All Right,” cuts by Billy the Kid Emerson. Tom Dowd recorded John Coltrane, Ray Charles, the Coasters — those and many others are the artists that thrilled me. They were performers — instinctive but artful. There are a number of contemporary artists, some of my colleagues and friends that I’ve worked with, like Lambchop, Yo La Tengo, Vic Chesnutt, and Jason & the Scorchers, who have made a very impactful impression on how I go about things since I can see them up close.

I can’t define Americana, but so far it stands for “little or no work.” However, the aim of creating an open-minded music genre where you let go of expectations has survived. Los Lobos is Americana. So is Harry Belafonte. Americana should reflect the real make-up of the country. But sometime Americana seems more like a private club. I guess I’m in it but I’m not paying their dues and for the most part I don’t come up in conversation. But that’s never stopped me from trying my best.

Where do you see Americana radio, or radio in general,  going in the future?

I think the Sirius radio programs are fantastic. And independent stations like WXNA in Nashville — where I have a show — are also excellent. My show is on Thursday nights from 8 to 9 p.m. CST. It’s called the Works Progress Radio Hour. It’s somewhat modeled on John Peel’s show, who I was a big fan of and met about a year before he died when Laura Cantrell had a session at his home studio. We’ve been on the air since June.

I quite like Molly Burch’s (no relation) debut, Please Be Mine. Robyn Hitchcock has a new one, the Waco Brothers and Jon Langford. Megan McCormick is great, she plays with Jenny Lewis and she’s finishing up a great new album. And I have a number of neighborhood friends who are making beautiful records coming out later this year.

Any time I see my bandmates arrive for a session, a rehearsal, or a show fills me with joy. I think the world of them as musicians and people. I know how hard their way has been so I try to give them good melodies, good rhythm, and a chance to show their true selves. I work without a set list mostly, and call out what seems best for the audience we have at the time. I tend to focus on the future. I’ve also been very lucky. It was a thrill to meet artists like Beverly Knight, Ralph Stanley, and Mark Knopfler — even DJ John Peel. But they were all very similar to the people I see every day: funny, kind, and absolutely dedicated to beauty.

What projects are you working on next?

I’m working on writing a new WPA Ballclub record and some instrumental music for an improvisational group called Bershenko.

I’m having a ball. As Stevie Wonder says: Love’s in need of love today.

What are your most proud accomplishments?

Being a good dad. It’s the true measure of a man.

How do you want to be remembered?
My intention is to make the music good enough to outlast the name of the person who wrote it. While I’m alive, I only need the consolation of acknowledgement so I know it’s being enjoyed by someone, so I can keep going. It’s a great feeling to have new work. 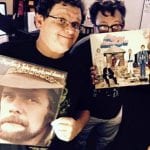 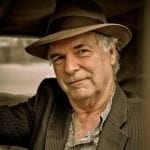