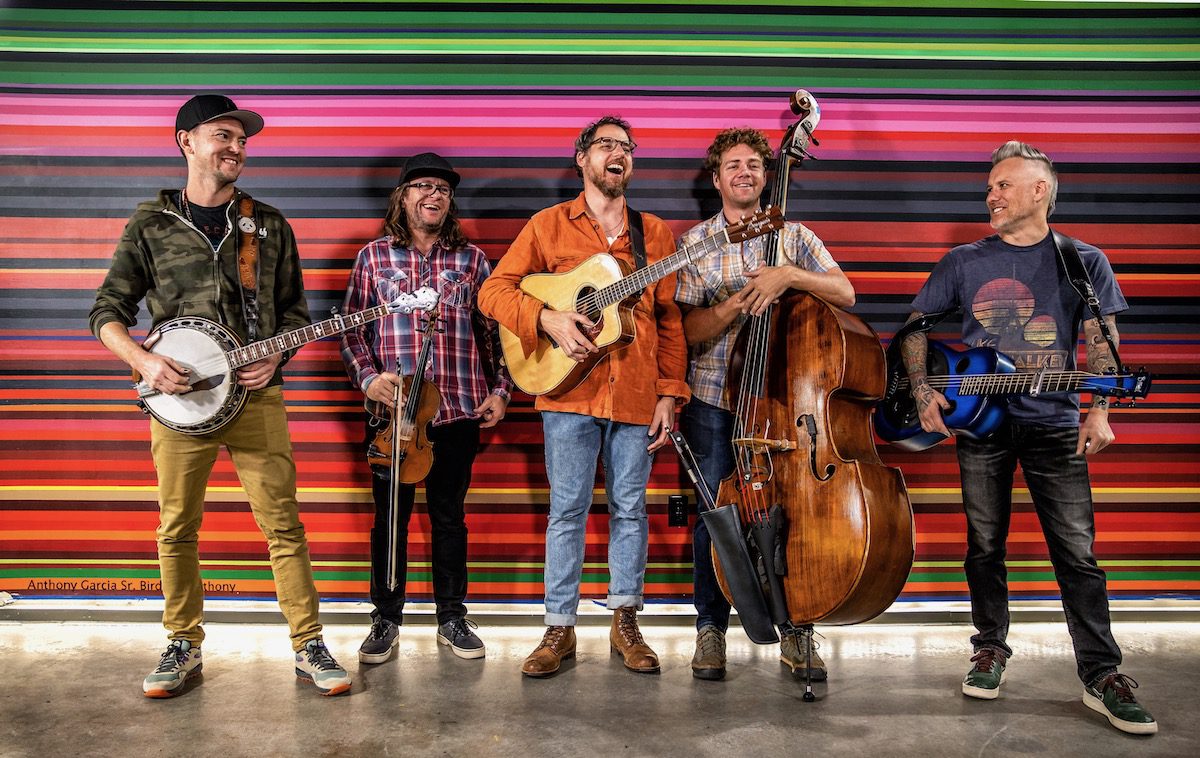 Despite the dystopian-looking album art featuring a girl in a gas mask holding a teddy bear as buildings crumble and the sky billows with smoke behind her, there’s optimism in The Infamous Stringdusters’ call for compassion, understanding, and coming together on Toward the Fray, their 10th album of original tunes.

The album was recorded by Colin Bricker at Denver’s Mighty Fine Productions and produced by the Stringdusters themselves across eight days in August 2020. According to bassist Travis Book, recording during the pandemic came with its own set of challenges but ultimately resulted in the band growing closer together both on a musical and a personal level. 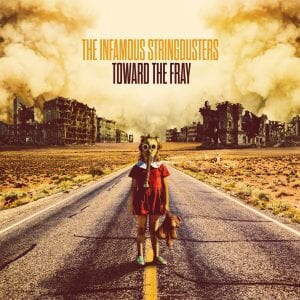 After 15 years and over a dozen albums recorded together, the band typically doesn’t struggle with efficiency in the studio. This time was no exception, although Book admits that pandemic-related restrictions and anxiety led to the group pushing their creative boundaries with one another further than ever before.

“Making a record that sounds like the Stringdusters isn’t the challenge,” Book says. “The challenge is seeing just how deep we can get on each song in order to make it the best, most authentic version of itself it can be. This requires us all setting aside our egos, being open to suggestions, and trusting one another to create the best music as possible.”

Due to its timing, the album is full of songs relating to the pandemic, touching on isolation, self-reflection, polarizing politics, the Black Lives Matter movement, and more. For Book personally, the pandemic wasn’t the start of his journey of self-reflection, but a catalyst for pushing him to explore even more.

“I decided a handful of years ago that I needed to be a lot more intentional with the songs I sing, whether they’re originals or covers,” Book says. “It really started with the ‘Me Too’ movement and realizing there were some songs, like ‘Little Sadie,’ a traditional tune covered by Tony Rice, [that] had lyrics about [murder] that made me and others uncomfortable. Even ‘Hobo Song’ by Peter Rowan has a line in it about killing 20 Indians with one cannonball. It’s a subtle thing and one I’m not sure anyone will get offended about, but it’s a lyric that doesn’t feel good coming out of my mouth. Music is a powerful thing, so it’s important that us songwriters really care about what we’re singing and the message we’re putting out.”

Despite Toward the Fray being the Stringdusters’ most overtly political album to date, the band manages to navigate the often polarizing topics with grace and self-reflection.

This heated dialogue, and the need to step back from it, is addressed on “Hard Line.” Fiddler Jeremy Garrett sings about getting so dug in on a devout stance on something that you’ll never be able to have your mind swayed, or be able to sway anyone who disagrees with you. After questioning how someone could get so entrenched in something, the song pleads:

“I Didn’t Know,” a song co-written by Garrett and Jon Weisberger, tackles the murder of George Floyd in Minneapolis in May 2020 and the ensuing Black Lives Matter movement with a similar story of self-reflection and asking hard questions. In a press release announcing the single’s release, Garrett said writing the song was both a way of documenting what he saw and how he felt and a reflection on the injustices happening to Black Americans that he and other white people have been blind to for so long.

And he’s not alone. Book says the pandemic and other recent events have caused the entire band to look inward more to examine how they can use their platform to lead by example.

“The last few years have given us middle-aged white guys a lot to work with,” Book says. “It’s a huge opportunity for us to become a little more self-aware and to gain some perspective on our roles in society and how relatively easy we’ve had things compared to other groups of people. I’ve seen that reflection already has a huge impact with our band, helping to bring us even closer together.”

That collective self-reflection continues on tracks like “Toward the Fray.” The song touches on how nobody can opt out of reality and that more compassion and understanding is needed in society. This song, like many others on the album, was written in the wake of Floyd’s murder, with Andy Falco singing:

Another too soon laid to rest
Some folks weep, some beat their chests
People, oh people
Let us stand on freedom’s side
For there can be no peace
Wherever justice is denied

The pandemic-related reflection reaches a boiling point on “Means to an End,” easily the album’s most blistering track. On it the Stringdusters lament society’s current polarization and how nobody wants to take responsibility for fixing the problems that exist, leading to a never-ending cycle of finger pointing.

No matter the stands the band itself has taken, Book says he wants their music to make people think without preaching to them in a manner that comes off as condescending or off-putting.

“We want to use our music to ask questions of ourselves, and therefore our listeners, rather than making a statement or stance on a position and digging in,” he says. “Our music should help to start a dialogue about what kind of people we want to be and how we handle ideas that don’t resonate with us as opposed to telling people how they should act and feel.”

The ability to start that dialogue with Toward the Fray is no doubt bolstered by it being the first collection of the band’s originals released to its own record label, Americana Vibes.

Launched in December 2020, the label already has several releases under its belt, from the Stringdusters and side projects from its members, as well as releases from some of the group’s closest friends, like Morsel, Midnight North, and The Sweet Lillies.

Book says that the band decided to start its own label to retain the rights to its music and not worry about working on somebody else’s deadlines or competing for attention with other artists.

“It’s disheartening as a band when you don’t feel you’re getting the attention you deserve from the people you’re paying,” Book explains. “How your album is marketed and presented is critical to its overall reach and success, so it’s important for us to have control over the story being told and the rights to our own music. Having that control over our own destiny, for better or worse, is paramount to us.”

Perhaps the most noteworthy release on Americana Vibes so far has been the Stringdusters’ A Tribute to Bill Monroe, which is nominated for Best Bluegrass Album at this year’s Grammy awards. The album was a big departure from the band’s progressive bluegrass sound in favor of a more traditionalist flavor as it wrestles with appealing to both types of bluegrass fan.

According to Book it was very liberating for the band, which normally operates on the fringes of bluegrass instrumentation, to go back and pay tribute to one of the genre’s pioneers, something the group plans to do more of in the future.

“It’s like therapy for us, we love that music,” Book says. “We don’t want to make original recordings that sound like Bill Monroe, but it’s fun to play his and Flatt & Scruggs’ music in a way that honors the legacy and tradition of the genre. It also helps to turn younger fans of ours on to Monroe and some of the forefathers of bluegrass that they may not be as familiar with.”

Just as A Tribute to Bill Monroe built a bridge between traditional and progressive bluegrass fans, Toward the Fray is similarly aimed at uniting, not dividing. With its hard-charging, deep-thinking explorations of current issues, the Stringdusters’ latest batch of songs seeks to bring people together, start a constructive dialogue, and kickstart the healing process. 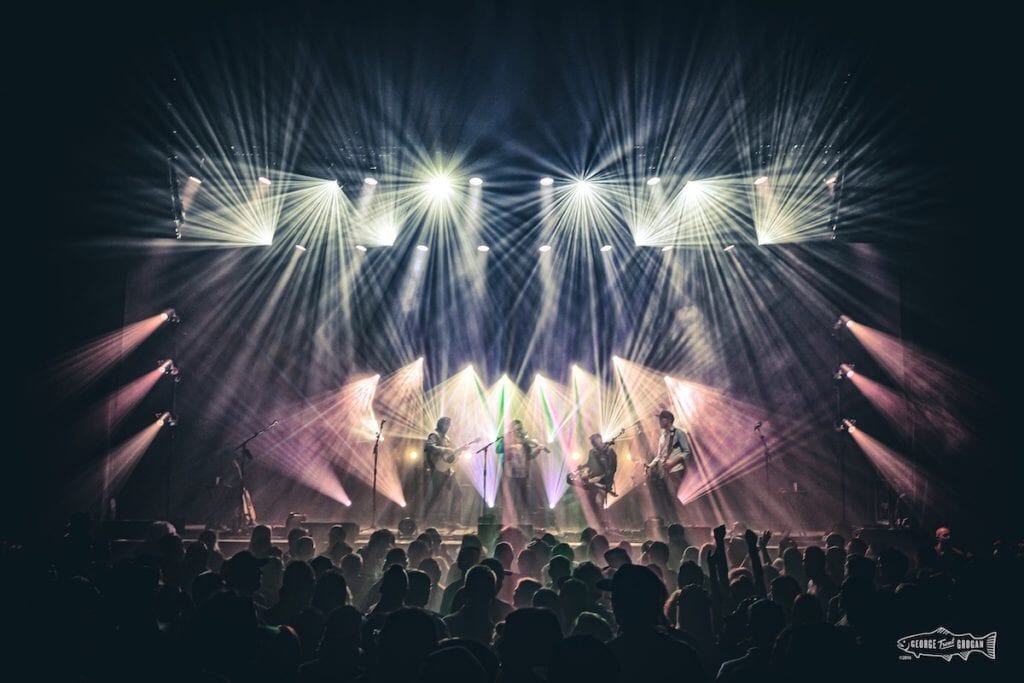 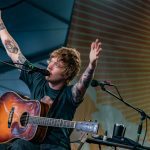 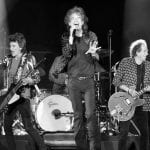 THROUGH THE LENS: ND Photographers Share Stories and Photos of Their Favorite Shows