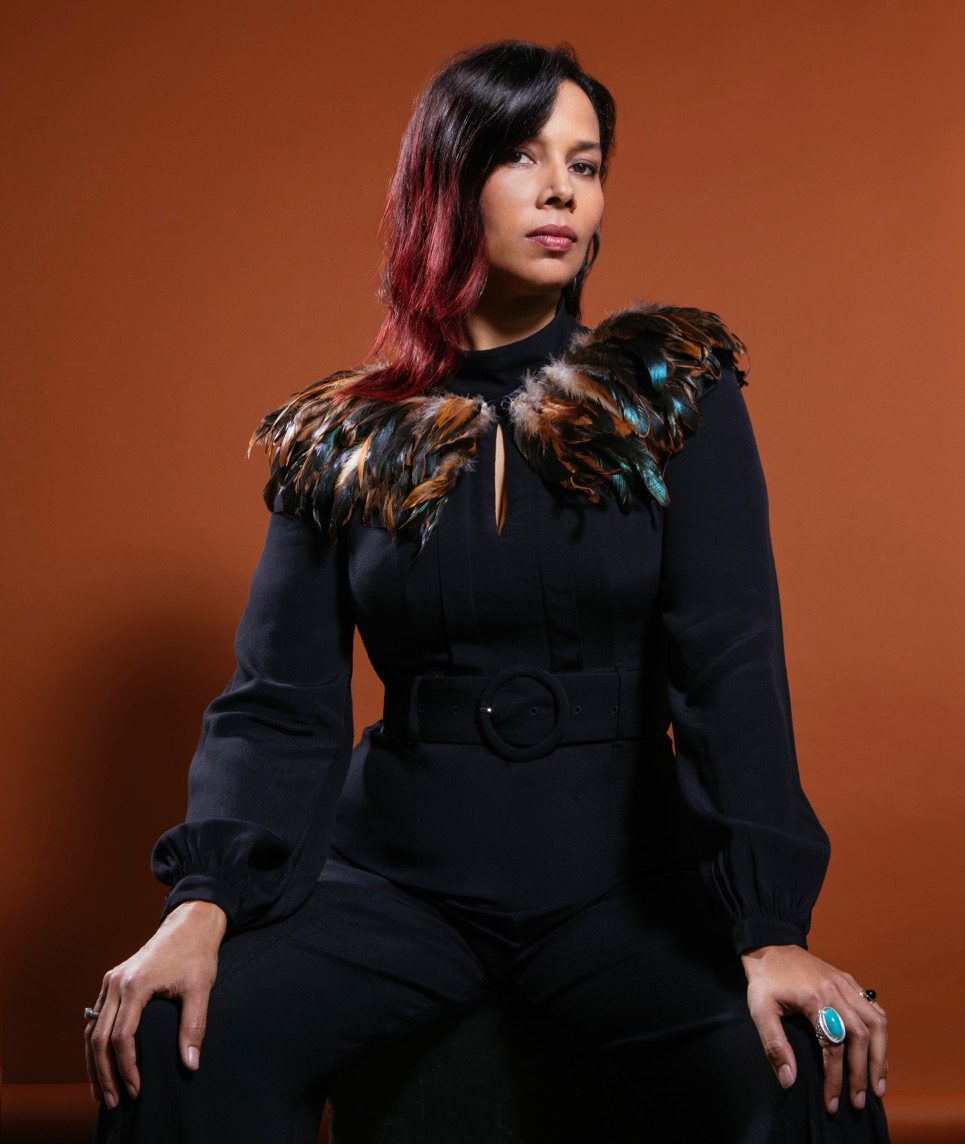 EDITOR’S NOTE: As the 2010s draw to a close, we at No Depression wanted to honor the artists who have had the biggest impact on roots music over the past decade. We chose four artists and are bringing you their stories — as told by fellow musicians who know them well — throughout December. We asked Allison Russell of Birds of Chicago and Our Native Daughters to sing the praises of her friend, bandmate, and mentor Rhiannon Giddens. Don’t miss our other Artists of the Decade: Chris Thile, Brandi Carlile, and Jason Isbell.

I first met my Our Native Daughters bandmate Rhiannon Giddens in 2006, at the Vancouver Folk fest. She was a year into work with her black stringband the Carolina Chocolate Drops, and I was three years into hard-touring with my Canadian band, Po’ Girl. We shared a student dorm at the University of British Columbia — one bathroom between seven of us. We were just kids. She helped me track down an archived compilation of early “race recordings” by black women artists called “Sweet Petunias.” She floored me with the depth of her knowledge of early American music and history. She introduced me, and much of the modern roots music community, to the Piedmont black stringband tradition and the black roots of bluegrass/country/hillbilly music that she and the Drops were reviving.

We bonded over our mutual love of Libba Cotten, Peggy Lee, and classic English literature. We formed a black nerd covenant with our shared sci-fi/fantasy penchant. I mean, I had quietly assumed I was the only black girl in North America who loved classical and Celtic music, who’d read Robin McKinley’s Deerskin multiple times, who could recite Lewis Carroll’s “Jabberwocky” from memory … not so! I knew I had a sister for life.

We’d both been called “Oreos” and worse. We shared the experience of some family members — on the white sides — being too infected by bigotry to recognize or welcome their multi-ethnic kin. We had both lived intimately with “Other-ing,” long before the term was coined. We got thrown into a workshop called Afri-Cana-Americana (really) with the token handful of other black performers at the festival that year — it was the first time we ever sang together. She was already a commanding presence on stage, barefoot and queenly, shredding the fiddle one moment, leaping up to flatfoot the next, and clawhammer-ing the five-string banjo with a backbeat and a deep pocket that felt like hip-hop to me. You could hear the Oberlin opera training in her breath control, but her rich three-octave voice was a gift all her own. You could feel the soul in it, and in her playing. I had never seen or heard anything quite like it.

Fast forward to February 2015: I’m home from a Birds of Chicago tour at my husband’s parents’ in Milwaukee, and the family is gathered around the TV, 1960s style, to watch Rhiannon on David Letterman’s Late Show.  She performed her now iconic version of Odetta’s “Waterboy.” Our then-1-year-old daughter, Ida, kept exclaiming, “There’s Rhiannon in the TV! There’s Rhiannon!” It was the first time we’d allowed her to watch something. I can still see it: She was absolutely riveted, her little body vibrating, as she stood in front of the screen. I was overwhelmed with emotion. Somehow it felt like a crystalizing moment for Rhiannon’s mission. I knew then that a bigger world — not just the dustier corridors of the music industry where folk often dwells — was going to receive Rhi’s electrifying education and strong medicine.

Most people point to that album, the T Bone Burnett-produced Tomorrow Is My Turn, as Rhiannon’s big coming-out party, and I wouldn’t dispute that. The collection of covers she reinterpreted is stunning, but it’s her one original, “Angel City,” tucked at the very end of the album, that resonated most with me, that signaled she was coming into her full powers — shape-shifting from reclaimer/interpreter into creator, writer.

I am found where I was lost, I am closer to free
Heart unbound, whatever the cost, all rivers fall to the sea

I can’t speak on Rhiannon’s development as a songwriter/composer without talking about the minstrel banjo. She acquired her Jim Martel-made replica 1858 minstrel banjo around 2012. That fretless, deep toned, wood-and-skin wonder — carrying in its DNA and trance-like sound the memory of its ancestors and the lands and cultures they spanned, from the Middle East to Africa to the Caribbean and the Americas — connects her to the slipstream in an almost mystical way.

She has told me of the feeling she sometimes gets when writing with that banjo: that songs already inhabit it, that she’s transmitting from beyond her, other voices speaking through her. Listen to her song “Julie” and you’ll hear it. Rhiannon is such a Renaissance woman, the narrative of her history scholarship/elucidation so central to her story, that it’s easy to lose sight of the fact that in seven short years of songwriting, she’s become a transcendent writer. Listen to “At the Purchaser’s Option” or “Come Love Come” from Freedom Highway, to “Mama’s Crying Long” from Songs of Our Native Daughters, or Grammy nominated “I’m on My Way” or “10,000 Voices” from there is no Other. These songs are canonical, waiting to be sung by your great-granddaughter around a fire 100 years from now.

Rhiannon says her work as a whole “is about excavating and shining a light on pieces of history that not only need to be seen and heard, but that can also add to the conversation about what is happening now.” When I was asked to write this piece, there were a couple of things I knew I needed to express to folks, as her sister, as her friend. First, don’t make her an icon and, in the process, sleep on her as a writer! I was listening to the Dolly Parton’s America podcast at the time, so that unfortunate dynamic was fresh in my mind. Second, her extraordinary, unceasing drive to use her platform to also shine a light on her sister and brother artists, past and present.  For her, stardom is an alien concept. There are simply voices that need hearing, stories that must be told. 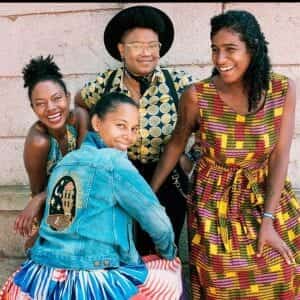 When Rhiannon asked me if I wanted to be part of a recording project for Smithsonian Folkways called Songs of Our Native Daughters with her, Amythyst Kiah, and Leyla McCalla, to explore the painful history of slavery and minstrelsy from the perspectives and experiences of black women, using our banjos as primary mediums of revelation, I said yes, of course. I’d been going through severe writer’s block since becoming a mother, was terrified I’d have nothing to contribute, but I couldn’t say no. The invitation challenged me to dig deeper — my writing dam broke. Rhiannon was heeding her intuition when she brought the four of us together. None of us knew that we would commune and create together so freely and fearlessly. None of us expected the overwhelming response our project received: Grammy nomination, Americana UK International Album of the Year nomination, Americana Music Association Group of the Year nomination, 5-star reviews in The Guardian, Rolling Stone, and on. By accident and by grace, a band was born — Our Native Daughters — stronger together.

Toward the end of those sessions, Rhi started knitting a multicolored wool blanket for her Irish-American children back home in Limerick. I watched her hands, slender and strong, long-fingered and deft, as swift and sure with the knitting needles as they are with banjo strings or a fiddle bow. She turned and looked at me and said, “I’m getting an idea for my next record.” That idea became there is no Other, her latest album featuring her Italian multi-instrumentalist partner, Francesco Turrisi, produced by Joe Henry.

Rhiannon’s new work flies beyond the borders of America. It dances along the through lines that connect America to the world. At the heart of the record is the marriage between Rhiannon’s minstrel banjo and Francesco’s daf, an Iranian frame drum — seemingly worlds apart, but in fact kin.

Rhiannon Giddens is more than an artist of the decade. She’s an artist for the ages. The breadth and bounty of her oeuvre and accolades over the last two years, let alone the last decade, is staggering. More than I can begin to touch on here. If you are unfamiliar, you can choose your adventure — multiple Grammy-nominated and award-winning albums, countless collaborations, the Lucy Negro Redux ballet, a MacArthur Fellowship grant, the inaugural Legacy of Americana Award, an upcoming opera and musical, the Aria Code podcast, a TED Talk, Ken Burns’ Country Music documentary, history-making keynote speeches, etc. — and dive in. Something in her art will speak to you. She stands in strength at the intersection of her black, white, and indigenous heritage, at the crossroads of past, present, and future in the music she excavates and creates. She’s quintessentially American, but also a global citizen — and her music knows no boundaries.  In a decade marked by polarization, climate crisis, mass displacement, reactionary wall building, loneliness and disconnection, we need art more than ever to bring us together. Rhiannon is an artist whose currency is empathy and connection. She’s already given us much — but the best is yet to come. I’ll be listening.

— Rhiannon Giddens, from her keynote address at the 2019 Americana Music Association UK Conference 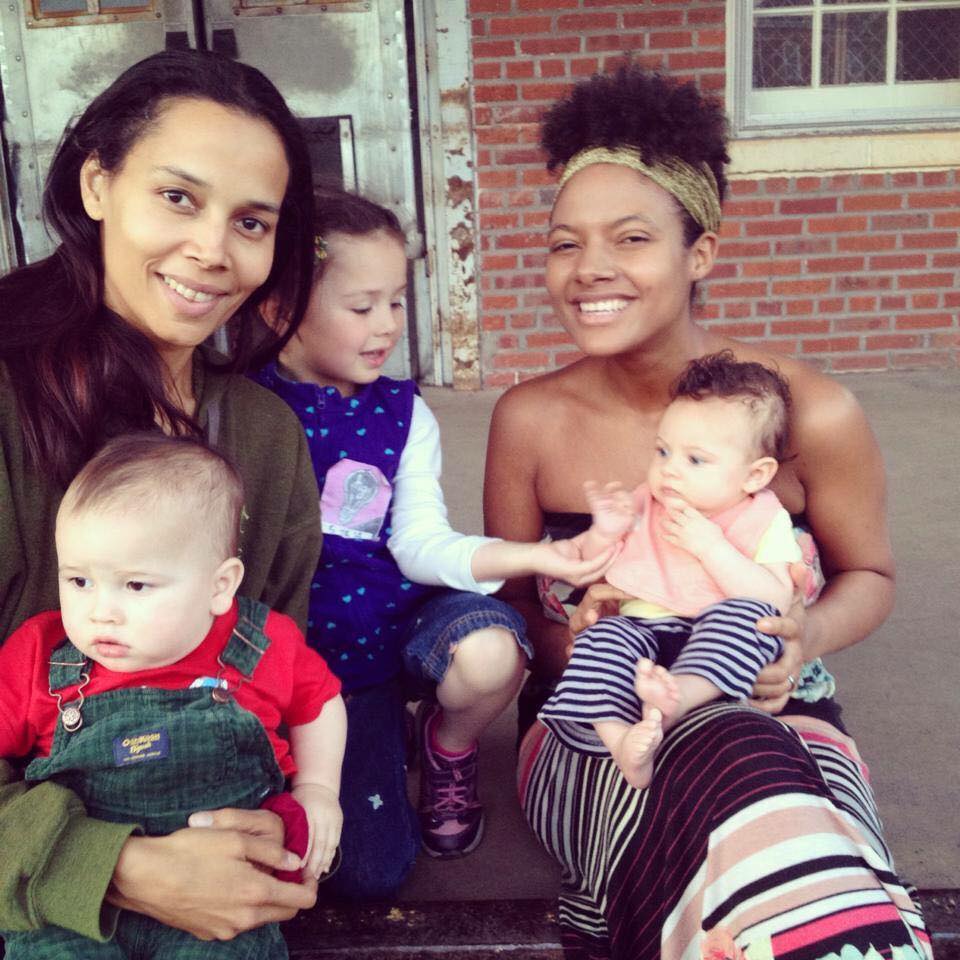