As Van Morrison strode onto the stage carrying his saxophone at Forest Hills Stadium in New York City June 19, numerous memories came to my mind. There were thoughts of many incredible concerts I saw Morrison perform at other venues through the years, but one thought prevailed that had nothing to do with Van.

This weathered old stone facility on tree-lined streets in residential Queens — a tennis club that once hosted the U.S. Open and many of the biggest names in rock and folk history — was the site of my first concert. It was July 17, 1971, and I had just paid $5 to sit high up in the bleachers to the left side of the stage to see a triple bill of Bo Diddley, Tower of Power, and Creedence Clearwater Revival.

I was only there for Creedence and was completely unaware of Bo Diddley’s legacy. And, if I would have been made aware of Diddley’s impact on rhythm and blues and rock and roll, it probably would have gone in one ear and out the other. I was there solely to see John Fogerty, Stu Cook, and Doug “Cosmo” Clifford — three of my favorite musicians who had just become a trio after the departure of Tom Fogerty from the band.

Creedence blasted a raw, pounding version of “Born on the Bayou” for its opening song and immediately had the 16,000 or so in the crowd in the palm of its hand. John Fogerty’s snarling, swampy vocals cut through the dark night like a butter knife, while Cook’s rumbling bass and Clifford’s powerful drumming kept a thunderous beat.

I was a 17-year-old kid in concert heaven — wide-eyed, taking in my first rock and roll experience with wonder and awe. Creedence finished the night — if I can recall through the foggy ruins of time (sorry, Mr Dylan) — with their new single, ”Sweet Hitch-Hiker,” and “Keep on Chooglin’,” one of my favorites. I left Forest Hills hooked on live music and just wanted to get tickets for more shows.

Like me, many concertgoers fondly look back at their first concert as one of the best shows they have ever seen. Call it nostalgia, call it impressionable first-show memories or naivete. But sometimes, like I would argue with the Creedence show at Forest Hills in 1971, that first performance was actually damn good.

Forty-four years later, as I walked again through the private, exclusive streets of Forest Hills toward the stadium with hundreds of concerts — or maybe more — under my belt, I felt some of the same excitement that was with me at my first show. Maybe it was the return to the legendary venue — which hosted two Beatles shows in 1964 and Dylan playing his first full electric set to an angry crowd a year later — but it also was the anticipation of seeing Van “The Man” again at the only U.S. show of his current tour.

Among some rock fans, Morrison once had a reputation of delivering erratic concerts — incredible one night and mediocre to poor another night, depending on his mood. I have heard that about other performers, including Dylan, but I have never understood those viewpoints. Yes, Dylan’s voice may be shot, but he and Morrison, whose voice remains a gift, deliver compelling musical statements with their hot bands night after night, tour after tour, year after year.

I have seen Morrison more than 10 times since July 1973, when I first saw him in Manhattan at Philharmonic Hall — which changed its name that year to Avery Fisher Hall. Only one performance wasn’t a knockout — at Jones Beach in Wantagh, NY, decades ago, when we walked away shaking our heads and wondering why the concert was so short. Then we got in our cars and a vicious lightning storm enveloped the area, and we realized why the plug had been pulled on the open-air show.

My first Van show at Philharmonic Hall remains today as one of the best shows I have ever seen. I was a Morrison novice who knew little about Van when I bought a single ticket in the rafters of the renowned classical music hall. I bought the ticket because my next door neighbor at Jones Hall, the freshmen dormitory at State University of New York at Geneseo, kept repeatedly playing through the walls Morrison’s album Tupelo Honey. The LP sounded great to me, and, since it was released in the year before the concert, I presumed I was in store to hear all or most of the album live.

Wrong! Van delivered song after song that delighted the packed audience who seemed to know each one, but none were from Tupelo Honey. So I sat there clueless. But Van was a ball of fire, and his 11-piece band — the Caledonia Soul Orchestra — was mesmerizing and revelatory. What was so special to me and probably others in the audience was an electric rock band augmented by strings, brass, and woodwinds. Hard-charging, densely layered rock and roll mixed with lovely classical and jazz interludes spiced with saxophones, violins, viola, trumpet, flugelhorn, cello, and tambourine. The Caledonia Soul Orchestra could instantly stop and start at the crack of Van’s voice. They plowed through energetic rock runs with Van’s powerful, soulful voice leading the way, and then brought the music down to a beautiful whisper.

Many Morrison fans believe the Caledonia Soul Orchestra was his best touring band, and critics have said his 1974 double album with the group, It’s Too Late To Stop Now, is one of the best in rock history. I agree, and the concert at Philharmonic Hall was a testament to that belief.

The seventh song at Philharmonic Hall was “Moondance,” and my uneducated Morrison brain at that time registered some recognition. Six songs later, Van launched into a rollicking version of “Wild Night,” the opening song of Tupelo Honey, and I finally got what I had come for. No other Tupelo Honey songs were performed, but, by the time Van finished with his frequent closer, “Gloria,” all I wanted to do was find the albums containing the unfamiliar songs that had been performed.

“Gloria” brought the house down, and then I witnessed something I have never seen repeated at a concert. The house lights came on to signal the end of the concert, but the cheering crowd refused to leave. The stage crew began dismantling the equipment, but the crowd wouldn’t budge. My guess is that the facility’s management feared an angry crowd, and Van was asked to re-appear to appease his fans. Van walked out on stage and explained that much of the equipment had been taken by the stage crew and couldn’t be used. So, he and some of his band played with whatever equipment remained.

It was the most incredible concert moment I have ever experienced, though Van would provide many more magical and memorable moments at future concerts in the decades that followed. They included John Lee Hooker and Mose Allison playing with Van at New York’s Beacon Theater in 1989 and 92-year-old jazz legend Jon Hendricks improvising with Van two years ago at The Theater at Madison Square Garden.

At Forest Hills a few weeks ago, where ticket prices ranged from $70.60 to $200.60, there were also classic Morrison moments under a beautiful nighttime sky filled with patches of blue around puffy, orange-tinged clouds.

Playing with a small (for him) band — four musicians and a back-up vocalist — Van strapped on an electric guitar, played leads and sang forcefully on a stomping version of “The Things I Used To Do,” a 1953 song of Guitar Slim. He played more guitar leads on the next song, “The Healing Game,” from the 1997 album of the same name. It was a reworked, extended, beautiful version of the song with Van soloing mid-song on guitar, scat singing, calling out the names of Muddy Waters and Jimmy Witherspoon, and looking up to the sky and singing to the heavens. Morrison also punctuated various songs with his sweet saxophone lines and harmonica bursts.

Like in 1973 at Philharmonic Hall, he pulled out a driving version of “Wild Night” that brought the near-capacity crowd to its feet, singing and dancing. Another highlight was “Here Comes The Night,” a song written by Bert Berns that was a hit in 1965 for Morrison’s band Them. Van also brought out his daughter, Shana Morrison, for a duet of “Rough God Goes Riding,” a reprise of their duet on his new album Duets: Re-Working The Catalogue. Near the song’s end, Van started ranting the names of Jesse James, Billy the Kid, Wild Bill Hickok and Clint Eastwood, and explained to the audience how Eastwood would say “good morning” and “nice day.” It was the only time during the entire concert that the stone-faced, enigmatic Morrison, wearing a suit jacket, fedora and dark sun glasses, spoke to the crowd.

Van encored with a smoking version of “Gloria,” walking off stage a few minutes into the song, holding a handheld microphone and singing. His band played several minutes more with each musician performing a solo, including jaw-dropping ones by former Irish session guitarist Dave Keary and keyboardist Paul Moran.

At age 69, Van is still a major creative force in the music world, live and in the studio. He gave us a night to remember, though not as memorable for me as the one for $5 at Forest Hills 44 years before. 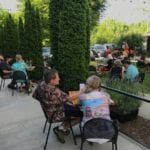