my search for jules shear and pal shazar

We all have songs and albums and artists that connect with our souls in a unique and spiritual way. Whether as a writer or simply as a friend, when we try to share  and convey why it feels and sounds so special to us, it is a task that doesn’t quite line up as one would hope. Because music and art is a solitary and emotional transactional commitment as distinct as a fingerprint and as fleeting as a snowflake. And yet, as daunting the task, we bloggers and writers and reviewers and critics and fans and followers and keepers of the flame…we still try to get the story out of the bottle.

I know web attention span is short. I’ll try to be brief. I’ll most likely fail. Please stay with me.

Jules Shear is a songwriter you know. And if not, you know some of his songs. Huge hits for other artists. He has been in groups, but mostly released solo albums that are full of wonder and joy. I first knew of him back in the seventies as a member of the Funky Kings (along with occasional No Depression peaceful and easy community blog person Jack Tempchin), and of course he was the Jules from Jules and The Polar Bears. But it was his 1998 release Between Us that turned me into a stark raving fanatical fan. I’ll come back to it in a sec.

Jules did something else in his past that you know him for. He was the creator and host for MTV’s Unplugged series. In my mind it was a game-changing shift in the musical cosmos, especially for those of us who grew up on rock or punk but now wanted to hear our music acoustically with wood and strings rather than amps, electricity and volume. And as this website is the Roots Music Authority…thank the man for laying a part of the foundation that still resonates today with what we call the genre of Americana.

Between Us. This album came out two days after I turned forty-six when I was working at Capitol Record’s distributor and one of my staff threw it at me over my desk and said, “You’re going to like this shit. Too fucking quiet for me.” Fourteen original songs, fourteen duet partners. Acoustic. Susan Cowsill, Paula Cole, Patty Griffin, Freedy Johnston, Roseanne Cash, Margot Timmons, Ron Sexsmith to name but a few. A top five desert island disc for me. Every single song, every single word, every single note. I played it every single day for seven years.

This was the album that pushed me to where I reside today. It’s the album, along with the other four of my top five, that is my gold standard for listening. And you buy his music, you wait for each new album, you tell everybody you care about to check him out. And those albums both before and after…each one was a sparkling diamond on a jewelers black velvet tray.

End of story? No.

Ten years after Between Us, Jules became Jules Mark Shear and released More, an album of mostly rockers with a few softer songs. It was 2008, he did some touring, radio and press interviews. He promoted the record. It’s a hard album for my old ears to listen to, but if we accept the roads travelled by Neil Young, we can certainly do the same for Jules. I would just wait for the next one. And wait. And wait. And wait.

About two years ago I got a little itchy. Where was Jules? What was he doing? He wasn’t anywhere one would look these days. No active website, no Facebook, no Twitter account. Hiding in plain sight or just taking it easy. Enjoying the fruits of his work or not. Who knew and why was it any of my business?

I knew his wife was Pal Shazar, and she was much more internet-active. An amazing woman with a music and art background who met Jules back when she worked at LA’s Troubadour. She was one half of the band Slow Children along with Andrew Chinich. If you have a good memory, their song “President Am I” was something of a…gasp…New Wave cult record. In LA, KROQ used to bang the heck out of it. Since then, Pal has released seven solo albums with various collaborators, she’s painted, wrote a novel of erotic fiction, founded a clothing line, performed sometimes and moved and moved and moved. Boston, Woodstock, Topanga Canyon, Ojai, Asheville.

There was a moment when I almost contacted Pal through her website last year to ask about him. But I stopped myself. When someone these days doesn’t make an effort to be found, why would I attempt to intrude? So I didn’t. Quietly, I asked some friends who might have access to check around, and I kept hitting up the internet. Here’s what I eventually learned:

-Pal and Jules did a show in 2011 in Malmo Sweden. I once ate at the Burger King there.

-In September of this year they did another show together in Rahway New Jersey. I’ve not eaten there.

And today…for reasons I can’t explain…I looked around again and found something amazing. There was a Jules Shear fan Facebook page. And there is a new website up for Jules and Pal…click it here. And finally…for the first time in all the decades they’ve been sharing their lives, they have recorded an album together.

I reached out to Pal this afternoon and for an hour or so we traded emails back and forth. The new CDs just arrived yesterday and I’ll soon have one to hear. I’m on the edge of my seat. I’ve found Jules and Pal. Outside of the new Martin I bought myself a few months ago, with Steve Earle hanging out at the shop and us talking a spell, this is the best day of the year.

Not my favorite day, but my best.

*****There is a woman from Ohio named Sherry Wallace who has taken Jules and Pal’s songs and created her own videos. I’ve linked her You Tube page and will share some music below. Enjoy*****

From 1992’s Great Puzzle with Jules and Pal:

From 1998’s Between Us with Suzzy Roche:

Between Us again…with Roseanne Cash:

And finally….here’s the original video from Slow Children…”President Am I”: 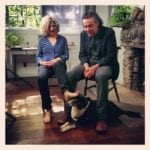 Hangin’ Out with Jules Shear and Pal Shazar