My Mom and Glen Campbell

Music was important to my mom. She and her first husband, my second father, were square dancers; I recall falling asleep to the rhythm of the caller and the sounds of fiddle and guitar while grown-ups navigated a wooden dance floor in more than one County of Parkland community hall. I don’t believe there were many other joyful times between them. After mom left the farm, she and my last dad’s early dates were to the local hotel cabaret, dancing to The Village Lads and The Emeralds. They met through a dating agency, and I believe their shared appreciation for music was important to their courtship.

Recently, Glen Campbell has been in the news. Unbeknownst to him, he is riding a ripple of acclaim given the quality of his final recording and the openness with which his family has approached his slide into dementia. He was nominated for an Academy Award this year, and won a Grammy. As a rather prominent entertainment personality, his plight has garnered considerable attention, all of it favourable.

That he has been for most of the past thirty-plus years a running joke—country music’s Nick Nolte—this late-life resurgence is only a little surprising. His misadventures are widely known. An admitted adulterer, Campbell once demonstrated his superior character by leaving his wife three weeks after the birth of their child. Years her senior, he ran around with and allegedly beat a youthful Tanya Tucker, spending years in a cocaine-and alcohol-induced cloud. Even as a senior citizen, he was arrested for drunk driving and assault. These events occurred while he spouted scripture as yet another sanctimonious born-again Christian. Campbell has not lived a life deserving of admiration. Still, as we have witnessed often, the previous transgressions an aging celebrity are quickly forgotten.

I found it compelling recently to compare my mom’s descent into the fog of Alzheimer’s with Campbell’s. Campbell and my mom were diagnosed around the same time, and the symptoms described are also similar. What drew me to reading more about Campbell’s decline was that my mom and he spent nights together in the late-Sixties and early-Seventies.

When mom left dad and the farm under cover of darkness one evening early in the summer of 1972, she took with her only the clothes she wore. But before that summer was over, she had secured an apartment in Edmonton’s west end, had it minimally furnished through the goodwill of her sister and brother-in-law (and, I imagine, an area charity), and had wrestled my sister and me away from dad and the madness that had become life on the farm.

We were poor. Welfare poor. I know mom struggled financially; depending upon government cheques, there was no choice. Clothes were hand-me-downs, treats were few, and transportation was walking and, rarely, via city bus. Money was too tight; I remember she once deliberately wrote a bad cheque at the neighbouring Safeway so that we had food. The faux-surprise but genuine humiliation she felt when she next went to the store and was refused service was hard to witness, even for a kid. The husband she had left contributed next to nothing, and that irregularly.

Looking back, Mom had few pleasures in her life during that time. As poor as we were, she started smoking; I was frequently sent to the corner convenience store to buy her cigarettes—a kid could do so with a note in those days—and after we were in bed she would sit up smoking while watching The F.B.I., Maude, and Hawaii 5-O. Like Bea Arthur, mom usually wore caftans—I think that is what she called them—when at home.

Other than the television and the kitchen radio, the only entertainment in the apartment was a record player (donated by a cousin) on a wobbly brass-coloured cart. There were only four or five albums stored beneath the player, and three of those were Glen Campbell albums. I only dimly remember listening to the records, but I remember staring at the covers and reading the song titles on their backs. These may have been the first records I ever touched.

While living on the farm, I recollect watching television only occasionally. I recall a didactic religious program with Davey and his dog, Goliath. I remember Untamed World, The Friendly Giant, and Mr. Dressup. The Edge of Night would be on during afternoon visits at one aunt’s house. And I remember The Glen Campbell Goodtime Hour.

Our tiny farmhouse front room didn’t have much space for furniture: a worn chesterfield, a large, faded red armchair, and the television. I remember sitting across my mother’s lap in the armchair, the two of us watching Glen Campbell singing and playing guitar.

I knew my mom loved Glen Campbell; it was obvious and I imagine watching that program was an escape from her day-to-day reality as a struggling farmer’s wife. Campbell had a gentle face and soft-looking hair. He wore fashionable clothes, a silky scarf. His hands looked tender, not hardened and grease-infused. He didn’t wear dark green farmer pants and come into the house smelling of manure and animal blood. He certainly didn’t hit his wife or children.

A few years later, in that little city apartment my mom listened to her small album collection late at night and when we kids were at the farm on court-mandated weekend visits. I believe she lived a fairly solitary existence during the first year that we lived in Edmonton, subsisting on government assistance and the kindness of family.

I remember the presence of those Glen Campbell albums, if not the details, because I woke up one night and heard music faintly playing. In my sleep-shrouded wakefulness, I wandered down the hall toward the music, toward the living room. I recall noticing the orange glow of the floor lamp, and strewn on the carpet the Glen Campbell album cover. As I looked around the wall into the room, I saw my mom facing the balcony window curtins and swaying, a cigarette burning in her right hand and yards of colourful, caftan fabric rippling as she slowly moved to the music softly playing on the inexpensive stereo.

I don’t know where she was at that moment. Now, I like to imagine that she was far away from the threadbare, two-bedroom apartment in Jasper Place. I would like to think that for a few moments on a dark and lonely night—in a dim and miserable life—she was transported from a building smelling of fish sticks and poverty and was dancing in the arms of her true love, Glen Campbell.

When she noticed me, I recall a softness in her eyes, a look I seldom saw. She gestured to me and I walked into the room as she moved to the couch. She sat and I crawled onto her lap and she held me. While Glen Campbell’s music enveloping me, I fell asleep.

Years later, once we were back on our feet and mom was in her second, final marriage, she had a number of 8-tracks, and a couple of those were Campbell’s. Later still, working at my first record store job, mom came in one day and purchased a Campbell ‘best-of’ cassette to play in her new Buick.

Glen Campbell’s recently released final song “I’m Not Gonna Miss You” has brought my appreciation for him to a new, thoughtful level. The song, co-written by Campbell, is absolutely devastating and may be the most honest and raw song about Alzheimer’s that I’ve heard. It is stark and one is tempted to suggest simple, but that would be a discredit to a songwriter who has always been more regarded as an interpreter of others’ words.

That my mother always admired Glen Campbell and is now dealing with her own journey with Alzheimer’s is at least part of the reason “I’m Not Gonna Miss You” impacts me so powerfully. The song lasts less than three minutes, as the finest country songs often do, but it packs a wicked, heartfelt, and honest punch.

I don’t play guitar or sing my song,

They never defined who I am

The man that loves you ’til the end

You’re the last person I will love

You’re the last face I will recall

Best of all, I’m not gonna miss you.”

It sounds harsh, but that is exactly what we’re hoping for my mother, that time when the confusion ends and the present situation is all that is remembered: a time when she doesn’t miss us or elements of her previous life. For now she knows her immediate family, although she is confused about our details. She smiled when I played the song for her recently, but she didn’t recognize Campbell’s voice. I told her she liked him when she was younger, and she nodded but I think she did so out of habit, not with any agreement. She can still have pretty good hours, but she does get upset and agitated when she can’t place something she feels is important, or fails to navigate a situation. She doesn’t have peace.

We’re told it is coming. At our last care team meeting, one of the nurses explained that as the disease progresses, Mom will find a relaxed comfort in her condition; essentially, she’ll forget that she should be upset that things aren’t making sense. Cruel indeed, and I don’t want to lose our connection and certainly don’t want to fast forward to this state, but there will be some blessing when she can again live in the moment with calm acceptance and peace.

And maybe, she’ll be dancing with the only man with whom she was ever happy. 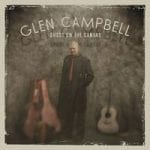