The first vinyl I bought for myself was at the wonderful, tiny record store House of Records in Eugene, Oregon. I bought it because I saw my friend Jerry Gallaher on the cover. I’d been playing music at French-Canadian jam sessions in Seattle with Jerry and loved his banjo playing. “Hey, what the hell?” I said. “That’s my buddy Jerry! What’s he doing on this old LP of some band called the Hurricane Ridgerunners?”

I’d recently gotten a Numark digital turntable in order to digitize old, obscure records and to learn tunes off them on the fiddle. I put The Hurricane Ridgerunners (1980, private press) on and was amazed at how fast they played! Just shocked. They raced through their tunes at an impossible speed and had this crazy-seeming falsetto to their vocals. I loved it all the same and took the time to digitize the whole album so that I could enjoy it on my computer. After listening a few more times, I realized that there was something just too impossible about the speed they played, and that’s when I discovered the difference between the 33 and 45 switches on a turntable. I’d been playing their 33rpm LP at 45rpm. No wonder it was so fast.

But even at 33rpm, these guys are blazing.

The Hurricane Ridgerunners were a uniquely Northwest band focused on Southern old-time music with splashes of bluegrass (a Don Reno cover), blues from Hank Williams, and a couple Irish traditional tunes thrown in for good measure. My friend Jerry Gallaher was on banjo and guitar, along with harmonica player Mark Graham, who later became very well-known on the West Coast for his hilarious satirical songs and his work with the seminal Celtic band Open House. The Ridegrunners also featured guitar/mandolin/cittern player Paul Kotapish, who also went on to renown with Open House, and Seattle fiddler Armin Barnett, who’s long been a secret source of amazing old-time and Irish fiddle tunes for those in the know. I’ve come to know each of these men and have long been a fan of their musical taste and abilities, but this was a huge discovery for me. Here are all four of them in the bloom of youth, tearing the shit out of the music, with an almost punk ferocity. This spoke to me in the same way that modern stringbands like Foghorn Stringband show me that old-time music can still have a lot of attitude.

I liked this record so much that when I founded the Seattle Folk Festival, I wanted to bring them all together for a reunion. They hadn’t played together as a band in years, but everyone was game for it and came up from their various homes for one more time around the stage. What a great show that was!

In honor of this being the first record I bought and such a perfect example of West Coast roots music, I asked some of the original Hurricane Ridgerunners to talk about the record and their memories of it. Please note also that the excellent record label Field Recorders Collective has recently reissued this LP in a digital format, so now you can buy it on CD. (And I encourage you to do so).

Memories of recording The Hurricane Ridgerunners LP, from Paul Kotapish:

When I moved to Seattle in in the late ’70s, Mark and Jerry were playing as a duo called the Hurricane Ridgerunners. There had been a few earlier incarnations of the group in previous years, but it was down to the two of them. I knew the lads from previous visits during Folklife festivals over the years, and joined them not too long after I arrived in town, and the band was still officially a trio when we went into the studio. Armin Barnett had been joining us to play fiddle at square dances and we asked him to join us on a few tunes on the record. Shortly thereafter, he was an essential part of the band. If we’d thought of it sooner, there probably would have been more fiddle on the record.

At the time we recorded, most of the string bands around the country seemed to focus primarily on fiddle tunes and on playing them as fast and driving as possible. When they did sing, it was typically in the rough-and-rowdy style. The thing that made Mark and Jerry’s duo so strong was their emphasis on songs and harmony singing, in particular. When I joined them, I added a tenor part and a lot of our stuff was trios. Although our intonation tended toward the ‘wet’ side of things, we had a pretty unique sound for old-time music in those days, plus we could kick butt on the tunes, too.

We had no money for the project and no label interested in us, but we needed a record to sell at gigs. Fortunately, our friend Maggie Murphy worked at Audio Recording in Seattle. [It was] a small but well-regarded studio under the monorail that featured a natural reverb chamber, a good 2″ tape deck, a decent desk, a great collection of vintage Neumann mics, and most importantly, Kearney Barton — a terrific old-school engineer who had recorded everybody and everything in Seattle, including the symphony and the opera. The studio had been the site of one very significant hit record: the Kingsmen’s “Louie, Louie.”

The studio was cramped and jammed full of stacks of tapes, old equipment, and whatnot. There were a bunch of old recording-themed cartoons on the walls, my favorite of which sported a wild-haired drummer behind a Ginger-Baker-style arsenal, requesting “more echo in the floor toms, please.” Maggie wrangled us a great deal and we determined that if we were super efficient, we could afford to make the dang thing and print just enough to get us through a cross-country tour we had planned a few months down the line.

We sat together in one room facing each other and recorded everything live to two-track, mixed as we laid it down. I can’t remember wearing headphones, but we weren’t worried about bleed or isolation particularly. No punches, no overdubs, no editing, no nothing. I think we did two or three takes of each track and picked the ones that sounded best, warts and all. As I recollect, we did it in about three three-hour sessions, soup to nuts.

Kearney and Maggie handled all the engineering, and our friend and occasional collaborator Sandy Bradley came in to give us some gentle suggestions, but there was no conventional producer. Kearney was famous for his homemade chocolate chip cookies, and I remember eating those on at least one occasion. Otherwise, I don’t recall much in the way of booze or other mood enhancers. I don’t think we had time to take a break, in any case.

Our friend Debby Nagusky took the cover photo in the house that Mark, Armin, and I lived in, in Wallingford. I did the very primitive cover layout with Lettraset rub-on letters and old-style paste up. To make the cover image pop a little better, I razor-bladed the portion of us sitting on the couch out and slid it up so that the nice leaded glass windows behind us were more prominent behind our heads. With no label of our own, we released it on the studio’s own “Topaz” label: TLS-1231.

I remember that there was a snafu with the pressing plant and we almost didn’t get them in time for our tour a couple months later. We were just packing up the Dodge van — replete with a platform bunk, with instruments below and sleeping bags above — when Maggie pulled up with the boxes of platters hot of the press. We sold a bunch of the things and did at least one more pressing, I think.”

I still have the price tag on my record of the Hurricane Ridge Runners: $3.95, which was kind of a lot at the time for a record. But it was signed by Mark Graham (though not the other members for some reason). I went back to House of Records just a few months ago and actually found another copy of this on the shelf. I think it was about $12 now. A sure sign of the rising vinyl prices everywhere that are driving out young collectors. Instead I bought a cassette tape of Porter Wagoner for 99 cents.

Meanwhile, word has it that the Hurricane Ridgerunners are now talking about picking up some new gigs together. 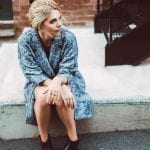 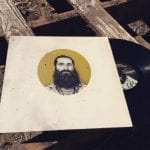 The Honky-Tonk Craftsmanship of J.P. Harris