I went to the Kerrville Folk Festival for the first time in 2005. I had heard from many different people how amazing and magical it was. However, when Elena and Phil spoke to me about the fest years apart from each other, I knew. They were both lampposts on the dark path. Like a bright sun through the fog, they were.  So I packed up my backpack and got on a plane to a state to which I’d never been and a party where I knew literally one person. I got there and fell in love immediately with everything. I realized then that if I wanted to play music for a living, I could just get in a car and do it. I didn’t have to wait for anyone to “discover me.” I could set up my own shows and tour.

So that summer, through a steep learning curve, I booked myself some gigs and built a modest tour that would take place in October. Thankfully, I had Google. I could just type in “acoustic venue salt lake city” and up popped a number of places that you probably would never want to go otherwise. But, when you’re out on your very own, most-dreamed-of adventure for the first time, naivete and hope will guide you into the strangest and most beautiful places.

After packing up my Dad’s Suzuki Sedan with three times as much stuff as I needed, I hit the open road. What freedom that was, for a 23-year-old. This was my life!

Of course, then, my first gig was cancelled. So I drove straight to my aunt and uncle’s house in Walnut Creek, CA. I went to the TAXI convention for unsigned artists with a friend. It was glamorous, staying in a fancy hotel in Hollywood, but this was surely not my scene. I stopped in at the Folk Alliance regional conference in Woodland Hills, though, which was much better. I went to the Kulak’s Shed open mic. I played for the second time at Pitzer College, where my friends were students. They had opened up a student center called the Grove House, where I played. It was a great show. All the students were quiet and attentive and bought shirts and CDs. I fell in love with a boy whose name I don’t remember. I was on THE ROAD!

I hightailed out of California and played in a strip mall coffee shop in Flagstaff. Then it was on to a hippie coffeehouse in Albuquerque called the Blue Dragon. Then I drove straight to Denton to hang out and play with my friend Johann Wagner. On the way, I slept in a Waffle House parking lot in Amarillo, TX. I had less than ideal accommodations, to say the least, but breakfast was cheap.

Denton has the magical Texas smell that I first smelled at Kerrville. Now that I live in Texas, I only smell it just before it rains. I couldn’t describe it if I tried, but it makes me feel warm and grateful. Johann and I played at Banter Café and I had a breakfast taco for the first time. Then I drove to Austin with some other friends and played at Flipnotics (oh, how we still mourn you!) with Southpaw Jones. I saw very little of the city, not knowing it would soon be my home.

Sadly, I left Texas and drove through Colorado without a gig, up to Wyoming where I almost crashed in a snowstorm. I played at a horrible bar in Salt Lake City and then continued onto Boise.

I entered my homestate of Oregon via a road I hadn’t ever seen before. It was a gloriously clear night at the Ore-Ida border. I saw a full moon over the Drinkwater Pass, which is rolling green hills dotted with pines and small farmsteads. I slept in an old motor inn before doing my final gig in Eugene. I played in Eugene at a bookshop venue called Cozmic Pizza. I don’t think anyone came. On the 90-mile nighttime drive home from Eugene to Portland, I cried the whole way. I told myself that doubt was fatal and I really could do this. The world looked so different, crisp and beautiful. After that I bought a minivan and booked myself a six-month, cross-country tour for the following year. That time, I anchored the tour with a $500 college gig at Bard in Upstate NY, but that’s a story for another time.

I’d learned my lesson, though: Sometimes it just takes a small leap of faith. 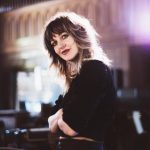 SPOTLIGHT: Anaïs Mitchell on What Was Lost and Found in the ‘Real World’