The best bluegrass music of 1999 came from artists with some mileage on their tires, if you will. Del McCoury, John Hartford, Dolly Parton and Dudley Connell are among the seasoned voices who have recently repudiated, with grace and depth, the pop music world’s maddening cult of youth.

At the same time, bluegrass audiences can be forgiven for getting restless with the relatively small clique of acts who seem to hop from one festival to another as if they shared a bus. Where, one asks rhetorically, are the Stanleys and Osbornes of 2025? Whose voices can we attach ourselves to today, with expectations of hearing them warm with age and contribute to the canon?

We’ll leave aside the multitude of youthful and slightly shaggy bands of the Leftover Salmon ilk, who make exciting, danceable, and occasionally cerebral newgrass for a post-Grateful Dead crowd. We’re looking for torchbearers here. It ain’t Ralph Stanley II, who has an awful, affected voice. And many people, myself included, find the ubiquitous and multi-award winning IIIrd Tyme Out as over-sweet as Cracker Barrel iced tea.

But just over a year ago, at the 1998 International Bluegrass Music Association convention in Louisville, a band made a quiet debut that snowballed into a full-fledged buzz by the end of the long weekend. Two well-known alums of Doyle Lawson’s Quicksilver band had teamed up with mandolin god Adam Steffey and a prodigious 20-year-old fiddler to form a supergroup with hardly a gray hair among them.

Mountain Heart, as they called themselves, played that IBMA showcase for the California Bluegrass Association, which got them some key festival gigs, which became the core of a 14-date, three-week western tour, which in turn anchored a year in which the band pushed itself hard to play 100 shows. That extensive live exposure, almost unheard of for a first-year group, proved critical in the culmination of the band’s lightning-strike success: winning the 1999 IBMA Emerging Artist of the Year Award. Even more astonishing, they won the prize without an album to circulate; their eponymous debut CD didn’t appear until this fall, after IBMA balloting was complete.

“People in the industry knew who they were,” says Dan Hays, executive director of the IBMA. “It was kind of like watching a cook in the kitchen. You see what they’re putting into the broth and you can’t wait to taste it. That’s what happened here. People saw them putting a remarkable band together and said they couldn’t wait to hear them. And the end result was as good as the anticipation.”

Mountain Heart’s self-titled debut is indeed a fine piece of work, featuring extraordinary harmony singing, a few contempo-folkie numbers to mix things up, and a couple of barn-burning cuts that keep the disc dug deep into bluegrass bedrock. The sound in some ways epitomizes what today’s bluegrass establishment regards as “traditional,” with crystal-clear tenor voices, plenty of sonic space around cleanly articulated banjo and mandolin lines, and just a whiff of New Age ambience. One could place Mountain Heart stylistically between IIIrd Tyme Out and the somewhat darker Blue Highway, and what they may lack in old-world guile and strangeness, they compensate for with vocal passion and instrumental intensity.

The band’s origins are in the musical partnership of 37-year-old guitarist Steve Gulley and 30-year-old banjo man Barry Abernathy. The two grew close during several years singing and playing with Doyle Lawson, a venerable but rigidly orthodox bandleader with a reputation for cultivating and graduating talent in the fashion of Art Blakey’s Jazz Messengers.

Abernathy, who first achieved national acclaim as part of IIIrd Tyme Out, blossomed in Lawson’s group, capturing the 1997 banjo player of the year award from the Society for the Preservation of Bluegrass Music in America. His mastery of the old-school Scruggs style, with its emphasis on right-hand accenting, flows both from boyhood fascination with Terry Baucom, another of Lawson’s great banjo players, and from the fact that his left (fretting) hand has been disfigured since birth. He depends on his intact thumb, wrapped improbably over the fretboard, and a couple of stubs to execute what sounds like a full range of complex licks and bends.

After Gulley left Lawson in 1996 to work on his own original country material in Nashville (“Jones/Haggard” school, he says), he and Abernathy would talk every couple weeks about starting a band. Finally, in 1998, Abernathy made his break, and the group began rehearsing with Steffey in the summer. Completing the front line was young fiddler Jim VanCleve, a North Carolinian who’d been winning contests for years and who’d also been part of Lawson’s band.

Just as things started to gel, however, Gulley’s carefully crafted strategy for breaking out proved too road-intensive for Steffey, who’d left Alison Krauss’ band a year earlier for much the same reason. Steffey’s resignation could have proved calamitous, but it didn’t. “We never lost a festival or a booking,” Gulley says with appreciation. “That speaks volumes for the trust people had in what we were doing.” 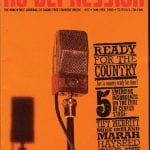