“I know what you’re thinking — ‘Oh, it’s those guys again,'” Morells guitarist Donnie Thompson says from the stage of the Duck Room in St. Louis during a gig back in September. And it may be true that, to many in attendance, the faces of Thompson, keyboardist Joe Terry, drummer Ron “Wrongo” Gremp, and bassist/quipster nonpareil Lou Whitney are eminently familiar.

After all, the band members, in various groupings, have been known over the years as the Symptoms, the Skeletons (twice), the Morells, and Combo.com, and have also backed, on record and in performance, acts such as Steve Forbert, Jonathan Richman, Dave Alvin, and Syd Straw. But this is only their second gig as the reconfigured and reinvigorated Morells, a name they haven’t gone by in more than 15 years.

“I realize a lot of you women out there probably met your first husband at a Morells gig,” Whitney adds. “So that guy you’re out there with now is finally understanding, ‘What’s she wanna come see this bunch of guys for?'”

Humility and self-deprecation may come naturally to the band from Springfield, Missouri, but so does practicality. That’s why they’ve come together once again as the Morells, the rootsier cousin to the legendary pop bar band the Skeletons, which itself made a second run at notoriety during the ’90s.

“We’re doing this for the same reason we ever did it,” Thompson says. “You’ve gotta find some format to work in. There’s no point in us, at our age, starting over. We might as well start with a trademark that is kind of familiar instead of confusing people.”

Of course, it’s not like the Morells is exactly a household name, unless your home was affected by what Whitney calls “the great roots-rock scare of the 1980s.” In that case, you probably know the group’s classic, sadly out-of-print album Shake And Push, back to front.

Released on their own label, Borrowed Records, in 1982 and reissued on CD by East Side Digital in 1990, Shake And Push found the band resurrecting long-forgotten gems such as “Ugly And Slouchy” by the Maddox Brothers & Rose and Joe Liggins’ boppin’ R&B number “Go Ahead”. Indeed, one song, “King Of Love”, was so obscure they couldn’t even find out who wrote it. (“We tried!” say the liner notes. “Call East Side Digital for your money.”)

Mixed in with the cool cover tunes on Shake And Push were originals paying tribute to Red’s, the finest Route 66 roadside diner in Springfield (“The only thing French on the menu is fried”), and yukking it up on “Gettin’ In Shape”, a song about the then-current health-club-as-singles-bar craze (“Here comes Betty/She’s lookin’ so sweaty/I wish that girl and I were going steady”). Whether they were surveying country music, R&B, rockabilly, or straight-ahead rock ‘n’ roll, the Morells’ music was always completely faithful to its source material, even as the lyrics were delivered with tongues firmly planted in cheeks.

That sense of fun and musical adventurousness is evident once again on the band’s self-titled new album, which draws material from songwriters such as Springfield’s own rockabilly hero Ronnie Self (“Hair Of The Dog”, “Home In My Hand”) and longtime band buddy Ben Vaughn (“Seven Days Without Love”, “Gimme Gimme Gimme”).

The Morells, in fact, were the first ever to cut a Vaughn song, placing “Man Who Has Everything” on Shake And Push. “He writes the kind of songs you don’t hear anymore,” says Whitney, gathered in late November with Thompson and Terry in the control room of the bassist’s studio, called, matter-of-factly, The Studio, and situated on Springfield’s town square.

“If this election thing [still raging with recounts, lawsuits, and near-riots at the time of the interview] had happened in 1954 or ’55, there’d be songs like ‘Ooh papa doo, I got eaten by a chad,’ or something like that. There’d be a bunch of songs about it. They don’t do that anymore, but Ben does. He writes songs that sound like they’ve been around forever.”

As with Shake And Push, the most difficult thing about the new album wasn’t digging up the songs, but rather figuring out who wrote what and who owns the rights. For “Rock Bottom”, the jump blues that opens the disc, Whitney says, “I went to BMI and ASCAP to try and find it, and there were like 60 songs called ‘Rock Bottom’. I went through there and just by using my power of deduction, I saw ‘Modern Music Publishing’ and I said, ‘Now, that’s the outfit that published a whole shitload of stuff that was on Specialty,’ you know, ’cause I remember seeing that when I was a kid. And I said, ‘I bet this could be it. So I called and talked to this guy, Joe Bihari, and sure enough, it was his song.”

While Whitney is frequently engaged in the business and production end of things, digging up the lion’s share of band’s unusual material often falls to Thompson, the group’s resident music archaeologist. “There was a guy here in town who was an ex-DJ who had 10,000 singles in his basement, plus 5,000 LPs,” Thompson recalls. “We used to go over to his house looking through everything. It was mostly non-hit stuff, below the Top 40. And I’d buy a lot of records, too. I’d hunt for that stuff.” 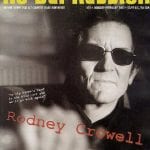