On Saturday, Dec. 30 at 9 p.m., Swampgrass Willy’s features Monty Warren & The Friggin’ Whatevers (MWFW), who will kick this year to the curb via roots rock covers, originals off their three albums, and a song or two off their upcoming Two Badasses album.

Just how bad was 2017 for Warren personally? In a recent phone interview, the South Florida rocker elaborated:

“This year gave me the worst heartaches of my life. Relationships crashed and burned, lifelong music idols passed away, and every day brought more bad news about the state of this country that I have deeply loved.”

On the other hand, Warren quoted Dickens’ famous line from “A Tale of Two Cities”: “It was the best of times, it was the worst of times.” Earlier this year, he returned to Mallorca, Spain to play with veteran rocker Phil Wolff’s group, We R Comin’. A couple months later, Wolff came to Palm Beach, Fla. to collaborate with Warren on Two Badasses, slated for release in 2018.

“Making a record with Phil has been a life-affirming experience,” Warren said. “Not only is it turning out way beyond my hopes, but I also made a new and lasting friendship.”

“The method in our madness is that when we flip off what was heartbreaking in 2017, it clears the way for hope and a fresh start in 2018,” said Warren. “Nothing gets the optimism flowing like a good Rock ‘N’ Roll F.U.!” 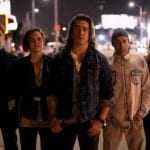 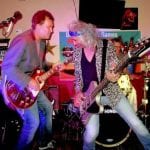