Sometime in the late 1960’s, Mickey wrote: “Just Dropped In (To See What Condition My Condition Was In)” for Kenny Rogers and The First Edition. although based out of Nashville with publisher Acuff/Rose, Mickey had crossed over into pop. Then,  in 1973, Mickey arranged and copyrighted “American Trillogy” for Elvis Presley which was beamed by sattelight  from Hawaii all over the world live when Elvis performed there. There was also a double album that went with the concert and it seemed like Mickey had arrived. How could a guy with just these two credits (not to mention his albums on major labels), not be famous? I guess only Mickey really knew the answer to that question and he took it to his grave. But, to this day, Mickey Newbury is not famous or even well known. All I can say about this is perhaps he was just too good! God knows he was a very gifted Singer/Songwriter/Guitarist and a great human being with depth and humor to boot.

Mickey helped: Kris Kristofferson, Townes van Zandt, Guy Clark and others from his house on the river in Nashville. Somehow although not a real well known artist, Mickey did manage to remain connected and would help his friends when he could. He drew a parallel between Paris in the 20’s & Nashville in the 1960’s and early 1970’s. (I wish as an artist that I was there then. By the time I got there in the 1980’s, things were already over for the outsiders in Nashville).

To close, I am going to recommend two fabulous CD’s by Mickey released in the 1990’s: 1) “Nights When I Am Sane.” This is  a live recording of just Mickey doing his thing. Great songs, very moody and well done…perhaps my favorite! 2) “It Might As Well Be The Moon.” this is taken from a line in “Frisco Depot” which is on this double CD. This is a very good example of what Mickey has done over the years and you might not only enjoy it…but learn from it. It’s partly live partly studio recordings. Very good as well. I can’t say enough about Mickey Newbury really without sounding kind of silly.

By the way…pass on the news…Mickey Newbury was a genius! 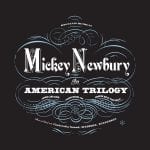 A brief tribute to tributes