Memphis, Tennessee  is the first big town you reach as you travel up the Mississippi River. A crossroads between city and country, as well as north and south, it may be overshadowed by state-mate Nashville as a music center, but a closer look reveals Memphis as the town where the American  pop music stew first came to a boil. (I disqualify New Orleans, because it’s gumbo belongs to something larger than the US melting pot.).

I submit these four Memphis stories for your consideration:

Making Things (O.V.) Wright -The Other Side Of Memphis Soul

The Stax/Motown dichotomy is just too delicious for music historians to leave alone. Motown, the northern label, a black owned business creating major pop hits whose success was rivaled only by The Beatles vs. the white owned, but highly integrated, southern label, Stax, whose artists introduced a gritty soul sound to the masses.

The influence and importance of these two great outfits plus their back stories have recently been subject to (relatively) massive coverage. I’m not complaining about this in any way, except for the fact that Motown and Stax are just the tip of the iceberg in terms of what soul has to offer. I guess I could complain about the constant flogging of Stax and Motown by their corporate owner, Universal, and how it skews the attention away from deserving soul artists from all over the country, especially singers from the south, which Stax represents only by location, and not necessarily in style. The history of soul music in America can not be shoehorned into Motown/Stax, hell the history of soul music in Memphis,Tenessee isn’t even covered by Motown/Stax. Fact is, Stax was just one of a number of labels documenting the Memphis Soul scene, that are deserving of attention. I’m not looking askance at Carla and Rufus Thomas or Otis Redding or Johhny Taylor or Sam & Dave, I just want to shine a light on O.V. Wright, whose output for labels like Goldwax, Backbeat and Hi, is material of the highest order.

But let me get to some music. If you’d like a complete breakdown of O.V Wright’s career,please check this excellent piece by Ray Ellis. I cribbed most of the facts I relate from there, so all credit to Ray. There’s also more music to hear there so don’t hesitate to hit that post

1971’s Nickel and A Nail was recorded in Memphis for the Backbeat label (the label was based in Texas and had a national distribution deal with ABC records-later bought by MCA) and produced by Willie Mitchell (Al Green, Otis Clay, Syl Johnson, Ann Peebles).

Jumping back a few years to ’65, O.V. had been singing in a gospel outfit (with soul great James Carr) called the Harmony Echoes, who were rehearsed by musician, song writer Roosevelt Jamison. Jamison wrote a tune called, That’s How Strong My Love Is and tried to sell it to Stax (no deal at the time) and then made a demo of it with O.V. Wright which he played for Goldwax Records owner Quinton Claunch, who signed both O.V. and James Carr.
That’s How Strong My Love Is ended up as a b-side that DJ’s liked better than the A, so it became a regional hit for O.V., that was quickly covered by Otis Redding..effectively stalling OV’s first single (Stax deal with Atlantic records pretty much insured that Otis’ version would receive national promotion and airplay that Goldwax couldn’t dream of.)

After about 5 singles for Goldwax, O.V. began a long association with Willie Mitchell and the Backbeat label. In ’73 this partnership (w/The Memphis Horns and Hi rhythm Section) yielded the Memphis Unlimited LP and the tune, I’d Rather Be (Blind,Cripple, and Crazy). 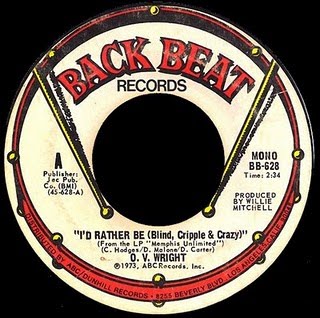 Except for gospel singles cut near the time of his death in 1980, OV would work exclusively with Willie Mitchell for the rest of his career. Completely ignoring the disco outfreakage of the mid to late 70’s OV continued to record deep southern soul records until he passed away (drugs and booze were major factors) at age 41.
The box set pictured below contains 5 early to mid 70’s O.V. Wright LP’s plus some of the early Goldwax singles and now’s as good a time as any to catch up with one of the greatest soul singers of all time by seeking it out. Drop the needle or hit play anywhere in Overton Vertis Wright’s career, though, and you’ll have made the right call. This is the real deal.

“When you gave O.V. Wright a song, the song belonged to him. Nobody would do it that way again. In fact, I think O.V. Wright was the greatest blues artist I’ve ever produced.”-Willie Mitchell

Besides having a son named Cody (there’s also a son of Jim named Luther-they are in the North Mississippi All Stars), besides producing Big Star and Mudhoney, besides playing piano on The Stones Wild Horses , Aretha’s Spirit in the Dark, The Flamin’ Groovies Teen Age Head, and Dylan’s Time Out Of Mind, and besides embodying the musical stew that is Memphis, Tennessee, James Luther “Jim’ Dickinson found time to make a few records of his own, including his 1972 LP debut, Dixie Fried.

He would go on making music until his death in 2009, including solo records, his work with Mudboy and The Neutrons, and several compilations of Memphis music showcasing new acts and historically important folks like Furry Lewis.

Being further up the Mississippi, Memphis was a intersection for country,jazz,blues, rhythm, and rock. Jim Dickinson distilled all that joy and history into the records he made as a performer,sideman, and producer. Look around for his story..it’s what American pop music, at it’s best, is all about.

Nick Tosches on Dixie Fried- “a dark, gale-force reworking of old Southern music, a baptism of loud and dangerous rhythms, that stands as one of the great testaments not only of rock ‘n’ roll but also of its ancient and unfathomable roots.”

When Detroit Met Memphis…The Beginning of the End?

Conventional critical wisdom (along with a little marketing and major label influence) would have you believe that the output of Stax studios in Memphis took a downward slide with the convergence of three factors.

Whatever the reason (and there is validity in the 3 reasons), things began to change at Stax with the arrival of Al Bell to run the business in ’69. Al Bell had (Motown)dreams of world domination and he felt he needed to look outside the insular group (although he knew they were talented) that had fueled the studio’s rise.

One of the folks Bell turned to was producer Don Davis; a cat who had deep roots in Detroit. Davis was assigned to produce new Stax signee Johnnie Taylor. Their relationship lasted about 10 years, culminating with “Disco Lady” in ’77.

Johnnie Taylor arrived at Stax in ’67 like so many Southern Soul belters..fresh from the Gospel circuit and lead duties with the Highway QC’s. His first record was strictly Stax, cut with the MG’s, and very much in the southern soul/blues mode. It was one of the last records Stax released with Atlantic, before the big changes began.

The long and short of it, is that Atlantic Records had made an incredibly one sided deal with Stax, where they retained all the rights to Stax records that were released on Atlantic. So in ’68 Stax, now released from Atlantic, found themselves in the position of having to start over. Stax owned nothing, no Otis Redding, no Sam & Dave, no Carla Thomas, no Green Onions. Founder Jim Stewart didn’t think he was up for rebuilding so he called in Al Bell.

Al Bell liked the family atmosphere at Stax but he needed to make a lot of records and make ’em quick (like Motown). He had to create an “instant catalogue,” to replace the chestnuts Stax no longer owned. He brought in Don Davis to help make all these new records.

Johnnie Taylor got busy, cranking out one of the first hits for the “new”Stax- Who’s Making Love, a record that sounded a little more Detroit than Memphis. Taylor never abonded the Blues though, cutting records in “southern” and “northern” styles throughtout his tenure at Stax..earning the title of “philosopher of soul.”

His career spanned into the late 90’s, as he returned to soulful Blues for the Malaco label, cuting records almost until his death in 2000. A versatile singer who had hits with gospel ,soul,blues and disco records, he is indicitive of the talent Stax had after the famous and PBS – approved Stax of the late 60’s was long gone.

Don’t let the marketers fool ya..there was more than enough great stuff going on at Stax post- Atlantic and a lot of it comes from Johnnie Taylor..it’s nice that the new Concord/Universal deal is slowly bringing this stuff to light, because it is indeed worthy.

To show how Stax was gradually beginning to include the Detroit sound, check out Johnnie’s ’69 cover of George Clinton’s Detroit recorded-I Wanna Testify, which was The Parliaments first big hit ’68, prior to the earthly arrival of the mothership.

In the mid to late 70’s, in it’s pop hey day, disco, ran roughshod over R&B and Funk, basically shuffling both genres out of the pop culture mix. Disco was cheap to make, a producers medium, and it was popular. Quickly gone were all the fussy artists and their expensive bands..the biz had found the solution.

Some folks didn’t go for it though..the anti-disco backlash quickly drove the genre back to the underground..where it flourished. One holdover from the disco era was the primacy of the DJ..as record promoter, remixer, and tastemaker. As club music splintered off into many combinations throughout the 80’s the DJ’s remained.

One section of the DJ world played “classics”..not necessarily disco, but whatever the DJ thought would move the crowd. For the most part they didn’t do beat matching or long transitions between songs or very much mixing at all. It was all about the songs, the whole songs.There was no rush, folks had come to dance, and they were ready to go til sun came up. These Loft parties had a real communal feel..no velvet ropes..everyone was welcome.

One of the tunes that made the cut in the Loft scene in New York was from the last Booker T & The MG’s record, Melting Pot. A long percussion filled track, Melting Pot was a far cry from Green Onions and the short instrumentals of the MG’s early Stax years. This track has jazz,funk, and tribal elements that would become the building blocks of various versions of house music that would emerge as the 80’s melted into the 90’s. That DJ’s singled it out is also a testament to their open minds and the “all about the music” spirit that drove post-disco clubland. The 80’s were real progressive in that regard, breaking down boundaries, as the music business kept throwing them up.

The whole Melting Pot album is worth your time, but the title cut, very futuristic for 1970, may be the most influential in the MG’s impressive catalog.

I’ll admit I may not have presented the best evidence of Memphis’ importance to the roots of pop,rock, soul, and funk. Consider it supporting material to Otis Redding, Sun Records, B.B. King, or Al Green…or Isaac Hayes, James Carr, Rufus Thomas, and WDIA.

One thing is for sure though, the river runs deep through the bluff city.