0
0
Shares
If you’re going to write about Steve Earle, we here at Turnstyled, Junkpiled believe, it best be done with some balls.  So, we’re kicking off the debut of our new journalism approach series “Sometimes the Song Writes You,” with an honest account of last night’s Steve Earle concert from one of our fearless writers.
Steve Earle, House of Blues LA 9/27/11
Steve Earle is a badass.  Bald, belly, beard and all, he’s the outlaw pimp daddy of County music. End of story.
When I walked into the House of Blues in LA at around 8pm, the first thing that occurred to me was that it was the very place Lana Clarkson worked when she had her now infamous encounter with record producer Phil Spector, that  led to her demise on a fateful evening some years ago.
What didn’t occur to me,  as I heard the sound of Steve Earle’s  “Waiting on the Sky to Fall” coming from inside the club, was that I wasn’t hearing a record.
“Wow, cool, they’re playing Steve Earle in there,”  I thought to myself as I approached the entrance .
Of course, I’ve never seen him live before. I’m used to his music blaring out of my car speakers as I sit in LA traffic, bottling up my aggression.  So, I don’t expect him to be on the other side of a door, strumming his guitar.
“That’s kind of odd they’d play a Steve Earle album before a Steve Earle concert,” I thought.
Of course, I realize now that either I was having some sort of momentary lapse of awareness, or I was incredibly stoned.
“I smell Marijuana and I think it’s you,” said the girl at the door as I handed her my ticket.
As logic would have it, I was incredibly stoned.  And although marijuana is basically legal here in California, I don’t think there will ever be a time when a person can walk in a place smelling like weed, without the kneejerk paranoid reaction that they’re doing something they shouldn’t.  So, I assumed that I’d messed up and wasn’t getting in.
“Damn it. Did I really need to do that?” I asked myself.
I stood there frozen for a minute, until I noticed that the same  girl who made that remark, was smiling stamping my hand.  And I remembered: It’s ok to be stoned going into a concert. Though, this was the rare type of concert where it wasn’t necessary. In other words – good.
Still, at that point, I was already in an odd state of confusion and that exchange didn’t help.  So as I walked in the dark musty room, it still didn’t set in that a few feet away, was one of my heroes in life.
“Is that Steve playing?”  I wondered. 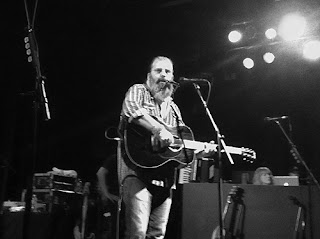 And there he was.  A burly mess of working class cool  in all his sloppy, unkempt, “I don’t give a sh*t” glory.  The legendary, redneck rebel enigma of Texas songwriting was standing before me.   And after the initial, almost paralyzing level of amazement passed, I sobered up. Quick.
And, there I was….. a nerdy twenty-something year old girl from New York, coming to grips with the fact that,  playing in the same room,  is a guy who looks, sounds and is the total opposite of me.
Yet, he’s written countless songs that have influenced or changed my life in some capacity.  But, that’s great thing about music.  We can relate and connect to what we choose.
Looking at Steve Earle now, it’s almost unfathomable  that he’s the same wiry twenty year old who use to play with Guy Clark and Townes Van Zandt. In fact, his young, lanky guitarist, Chris Masterson (Son Volt) looks more like what Steve use to.  But, unlike a lot of artists up in years, he still hasn’t lost his luster.
“Same cat, years later,”  he remarked.
As he plowed through an array of instruments, energetically belting out modern Irish rebel cries like “Molly-O,”  for a full ninety minutes, he proved that he ain’t just restin’ on his laurels.  This Tennessee hillbilly by way of Texas still has the same youthful fire.
With remarks like “Trade unions are an essential part of democracy” and “No one takes care of what’s under your feet but you,” Earle proves that he’s still an advocate for the underdog and though he’s gone through hell and back, he survived and isn’t ashamed to talk about it.
“I was a heroin addict, I don’t believe in lost causes,”  he said (later announcing  17 years of sobriety under his belt) 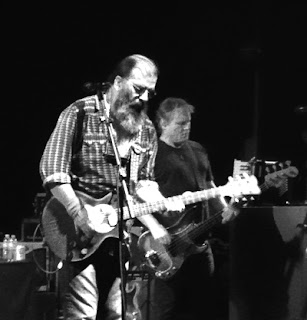 Though Earle may be a master of riling up a crowd, this four hour long event proved to be a testament of appreciation and endurance.  As I stood there at halftime (er, intermission) wondering whether or not it was physically possible for my legs to hold out for another two hours, I noticed Guy Clark on the speakers and Lucinda Williams standing at the bar.
At that point, I asked myself,  “Is there something better I could be doing right now?” and I came to the conclusion that there wasn’t anything close. Obviously.
Earle led off the second half of the show with a high energy rendition of  “Copperhead Road”  that set the tone for  a set filled with everything from guitar fueled,  fist pumping classics like “Revolution Starts Now,”  “The Devils Right Hand” and  “Hardcore Troubadour” to the bluegrassy, acoustic, “Hillbilly Highway” to the emotionally charged “This City Will Never Drown,”  which he wrote about New Orleans ( a city that he considers  “The heart of American music”) for the HBO series, Treme.
And when someone in the crowd repeatedly asked him why his character on that show was killed off, he showed incredible restraint.  But as he filled the room with distorted vocals and harmonica on “Meet Me in The Alley Way,” he made it clear he ain’t to be f**ked with.
Thank the gods of Country music this guy beat  the odds and   survived all those years of hard living.  Because, all too often, I go to concerts where I see my aged heroes perform and I walk out   having to remind myself of their former greatness.  But not  Steve Earle. He’s the type of musician that instead, reminds me why I love music.
He plays because he wants to, not because he has to. He’s as willing to share the stage as he is life stories (like the one about how he once had a trailer full of guns back in Texas and a 14 year old Justin who hid a pistol and scared the sh*t out of him the day he got sober) because, he’s the real deal.
And four hours and three encores later,  I said the same thing walking out as I did walking in, “Steve Earle is a badass.”
For information on Steve Earle and his “I’ll Never Get Out Of  This World Alive” tour, visit http://www.steveearle.com