0
0
Shares
Part Two of our Earle double header – Justin Townes Earle @ The Music Box, LA 9/28/11
It’s about 9:30 pm, outside the Music Box in Los Angeles, Ca.  Standing in the shadows of the backstage entrance is a tall, lanky figure in a three piece suit, restlessly pacing around, sucking down cigarettes, one after another.
“Hey Justin, why weren’t you at Steve (Earle) last night?”
“Oh, man…. I wanted to go, but we got in too late.  I’m going to catch his show up north (at the Hardly Strictly Bluegrass Festival).”
For years, the subject of Steve Earle may have been a sensitive issue with son, Justin.  But, as time has passed, Justin Townes Earle has proved that he isn’t just a substitute for his father or namesake (Townes Van Zandt). Rather, he is a great musician in his own right.
In appearance and sound, Earle is the closest thing there is to a modern Hank Williams. But, he isn’t trying to be anyone other than himself, nor does he need to. He is a rare creature, an enigma.
“It was too hot for a jacket,” Earle apologetically remarked as he walked out on stage in a vest and bow-tie, opening his set with the rockabilly tinged, “Ain’t Waitin’.” 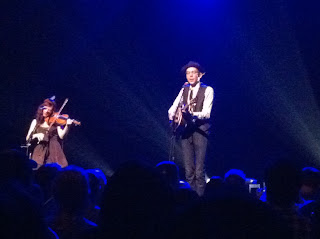 Though he may look and act like a sweet talking Southern dandy, at the core, Justin Townes Earle is badass who ain’t afraid to roll up his sleeves and fight dirty.  Yet, at the same time, he comes across as nothing more than a nice country boy.
And with his 2010, AMA album of the year nominated, Harlem River Blues, Earle shows us that no matter where he goes, he brings his country with him. At the young age of 29, this Nashville native proves to possess wisdom and experience, far beyond his years.  But, it comes with the territory. He is an Earle, after all.
Though he may be on amicable terms with his legendary father, it’s plain to see the hurt’s still there. His slow, almost hypnotic interpretation of “Mama’s Eyes,”  was like a fresh wound set to music.  And in the new song (which is still in the works)  “I’m Tryin’ to Move on,” Earle reveals that the problems in his life might be traced back to the “moment when his father tore his mother’s heart in half.”  Then again, he reminds us that it was his father who told him, “never mind people’s feelings, just write it.” 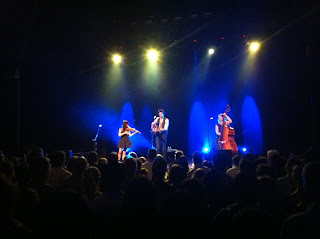 And he does. Because,  Justin Townes Earle is legit. In fact, he may be the only skinny young white guy around today who can play anything from Lightnin’ Hopkins to “They Killed John Henry” without coming across as anything other than pure and authentic.
When he says “this is how you play the blues,” he means it. And as much as he bleeds emotion as he furiously strums and picks his guitar,  it’s a wonder his hands don’t actually bleed.  When he plays, he plays right.
A lot of artists today make the mistake of trying too hard to be innovative and they wind up ruining their sound. But not Earle. Even the new “Passing Through Memphis in the Rain,” proves that his songs are solid in their uniqueness, yet familiarity. And that’s what’s so great about him.