A dusty highway, a lonely motel room, a tiny bar that will forever smell of split beers and fried foods … that’s the mise-en-scène conjured by many of Lindi Ortega’s songs (exemplified by her 2012 release entitled Cigarettes & Truckstops). I incorporate this theatrical term when discussing Ortega’s songwriting because of her ability to create detailed, mood evoking stories with her lyrics  and mesmerizing voice.

A Toronto native, Ortega was greatly influenced by her father (of Mexican descent) and the music that he made with his bands, especially his collaborations with female vocalists. Today, Ortega calls Nashville her home base, a town much more suited to her sound.

For those unfamiliar with Lindi Ortega, she shares a vocal similarity to country legends Emmylou Harris and Dolly Parton (for proof, check out her amazing cover of Dolly’s “Jolene”). She also cites an eclectic array of influences including Leonard Cohen, Johnny Cash, Jeff Buckley and Cat Power. As for her contemporaries, she shares a similarity in style to Ambrosia Parsley (of the band Shivaree), Sarah Borges, Rosie Flores, Ryan Adams, Sarah Harmer, Tift Merritt and Carrie Rodriguez.

At it’s heart, Tin Star  is an autobiographical album about Lindi Ortega’s pursuit of success in the music industry … especially, the plight of the independent artist. As with any country singer worth his/her grain of salt, relationships (especially bad ones) are also a recurring theme on this album.

Interestingly enough, Ortega kicks things off with the relationship thread (maybe because that’s more universal than the struggles of life on the road). In “Hard As This,” Lindi states, If you need space, take a trip … If you need time, here’s a clock … I’ll be somewhere giving up on you.

“Lived and Died Alone” is the ultimate in unrequited love songs. Love never came easily to me /there were no fish swimming in my sea / I resided myself to the fact that I would always love, never to be loved back / that’s okay …. While not a standout on the album, I can imagine how powerful and haunting this song must be performed live.

A track that would make for a strong single, “I Want You” identifies the Angel/Devil side of Ortega: There will be angels, there will be devils, I will be in between … I’m hanging up my halo, I’m getting out my pitchfork. As her semi-Goth/murder-balladeer image suggests, something tells me that it’s a bad idea to scorn Lindi Ortega. Step aside Carrie Underwood, here’s a revenge song with true bite!

“Something for You” is the guilty confession song- the declaration that platonic friendship might not be enough for one of the parties involved: I don’t need you to love me, I need you to hear me out … all these words that were trapped in my heart are finally free from my mouth … I need you to know how I feel, because I don’t want to live in regret what I didn’t reveal …. and darling I’m feeling something for you. Whether as the doter or the doted, it’s a relationship that we’ve all experienced, and unfortunately, not usually one with a happy ending.

“This Is Not Surreal” is a song that bridges the two major themes of the album. In it, we have the best of both worlds with failed relationship due to the life of being an artist!  One must always suffer for the sake of their art. In the song’s stark nature, one can really see Leonard Cohen’s influence on her work. If not for heartache and heartbreak, where would we find all of the great love songs?!  A bit more sullen than most of the album, it does pair well with “Lived and Died Alone”.

As for the life of the struggling musician, “Tin Star” could be any independent musician’s origin story. Ortega stated that she wanted this song to be the album’s title to remind her of her path to success … which her past two albums have clearly primed her for! But, in a town like Nashville, there’s a legion of artists one break away from success … or, one failure away from calling it off and going back home.

The video for “Tin Star” is a fabulous representation of the song:

“Gypsy Girl” is also rife with the autobiographical nature of Tin Star. It’s a love song to the life of being on tour- and a pledge that she will keep on singing until the day she dies.

“Voodoo  Mama” continues her theme of loving life on the road and is a barn-burner of a song. Clearly Ortega’s visits to New Orleans have left quite an impression on her. LIke the anticipation of your destination when approaching an airport, “Voodoo Mama” speaks of the spiritual call that New Orleans has on anyone who’s ever visited the city.

“All These Cats” comes across as rockin’ as Ryans Adams’s “Shakedown on 9th Street”. Refusing to be run out of town, Ortega declares: All these cats keep staring me down, trying to run my ass out of this town … I ain’t gonna look, I ain’t gonna listen … I’m just going to continue my mission. I’m here to stay.

“Waiting on My Luck to Change” is the do-or-die optimism of the singer/songwriter who is feeling discouraged by not getting his/her break … it’s always sunny up above the clouds … ain’t no darkness going to hang around. This little ditty is one of the most pure country tunes on the album, filled with bad luck yet peppered with a little optimism to get you through the gloom.

Closing out the album is “Songs About” which gives is Cliff’s Notes to the themes and topics of Ortega’s catalog.  And lest we not realize that it’s autobiographical, the line ”Little red boots, and a little black dress / For every occasion I’m wearing my best” leaves no doubt that she’s singing about herself.

I’m glad that Ortega doesn’t address her penchant for wearing sassy red cowboy boots, tiny black dresses and bustiers until the end of the album. While the boots and Goth clothing choices  are all part of act (her “widow’s robes”), her talents surpass the need for the sultry temptress persona (granted, her 2011 album was entitled Little Red Boots). In fact, Tin Star was nominated for a Juno Award (her second nomination for Canada’s equivalent of the Grammys) and Entertainment Weekly (EW)  ranked Tin Star in their  Top 10 Country albums of 2013.

As an added bonus, if you’re a fan of covers, Ortega has some amazing ones circulating on YouTube- check out her versions of: Leonard Cohen’s “Hallelujah” and “Chelsea Hotel,”  The Animals’ “House of the Rising Sun” and Willie Nelson’s “Always on My Mind”:

Adam Kukic is the host of The Coffeehouse on 91.3-FM, PIttsburgh. The Coffeehouse is the perfect complement to your coffee maker percolating on Sunday morning’s from 8am- 11am (EST). Tune in online at www.wyep.org 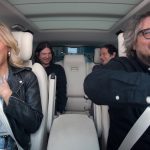