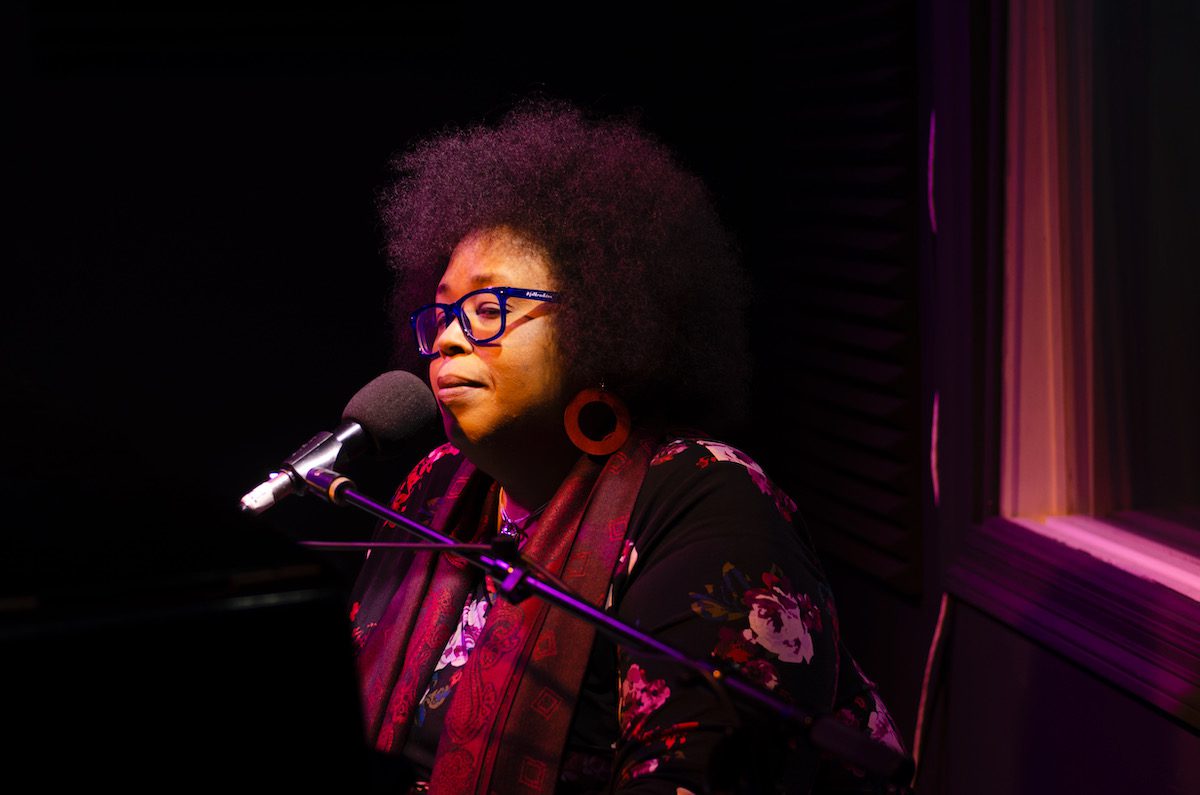 At around 4 a.m. on May 18, 2020, I woke up with a lyric fully formed and ready to roll out of me. I stealthily reached for my phone, trying hard not to wake my peacefully sleeping wife, and transcribed the stream of consciousness coming through, too sleepy to manipulate it. I figured if it wanted to be a song, it would let me know at some later date.

Song transcribed, my head sank back into my pillow, but by the time I woke up again, I had a sense that something special had been born that night. I sent the lyric to a friend who appreciates such things, and asked her to brainstorm a second verse, as I could only hear the melody of the first two lines. I couldn’t hear any chords yet at all. No rhymes, the phrase structure was irregular, this lyric was going to involve some shoe-horning to become a song. I put it in the Google Drive file with all my other orphaned lyrics, each like Pinocchio, waiting to become “a real song someday.”

By that time, the phrase “my American heart” had been rattling around in my brain for months with an entirely different melody and frame of reference. The words had mapped themselves onto a snippet of a melody informed by my ancestors, by the Spirituals I had grown up with as part of the rich heritage of the African American folk tradition. The melody, at its core, was one of W.E.B. Du Bois’ “sorrow songs,” but I could only hear those words, repeated twice: once as a question then as an answer. It felt like a clarion call. The new melody, however, that pre-dawn dream lullaby of a melody, came with hushed tones that attempted to soothe while begging to be heard. These two melodies went on dancing with each other, trying to get to know one another, knowing each one mattered to the other, but neither was yet aware of why.

Then on May 25, a man was choked to death under the knee of another man, in plain view of countless observers. The man with the knee kept his hands in his pocket while death was approaching, wringing out the life of another person with the casualness of wringing out a mop after cleaning the floors. I had chosen not to watch the video, because my mind did not need to be occupied by any more monsters. I had learned through seven sacred years of trauma work that I must, at all cost, be kind to my mind. Still, my body could feel the collective pangs of heartbreak as the world watched the video over and over again. We may never know if this death would have mattered as much were it not for the grotesque nonchalance of it all, but this 9 minutes and 29 seconds of deadly indifference proved more than the world could hold. In the middle of a global pandemic, with everyone’s mortality shown in stark resolution, this death mattered.

I finally watched the video, at least as much as I could stand. Not 90 seconds in, I felt all the blood drain from my chest, and the squeeze of it set off my self-determined warning signals. I received a flash of emotional memory, of all the times I had felt invisibilized on the other side of a white gaze, a sizeist gaze, a male gaze. I felt the rage and desperation of an internal self-awareness begging “See me.” In trauma recovery parlance, I felt the very “young” awareness that this “seeing” was a matter of life and death, of the body, of the spirit, of the will.

The thing about emotional memory is it exists in no time and all time at once. It has mapped itself onto your body so that the body can know before the slow processing brain does that it is in danger. This emotional memory was reminding me that my body felt as though it had always been in danger … that it had never in fact been at rest …

As I watched the video, I saw that everyone around George Floyd knew what was going on, but no one intervened. It felt familiar, and immediately made me awake to the anxiety of the invisible; a primal sense of foreboding swollen with abandonment, rejection, and shame all at once, had been slowly killing me all my days. I had always had trouble breathing. My surroundings had largely proven indifferent to this fact, and here is where I learned that I might have made a habit of clinging to mercy for others, because I was so desperate to experience it myself.

I was reminded of that “American heart” lyric that wasn’t yet a song, and I looked through other lyrics of abandoned songs that told stories of the invisible, songs I never felt safe singing in the bon temps rouler buzz of New Orleans. In lockdown, no place was every place, and these stories waiting in the wings were suddenly mine to tell again.

From lockdown, I could make an album and call it Americana, because so many people had been telling me that they believed me claiming the word “Black” or “African” before the word American somehow made me less so … and that my music, reflecting more than one language from the American musical lexicon, made it something other than Americana. I believe myself to be a foundational American. My family, some enslaved, some free, has been on this soil since before there was an America, and we have been deeply invested in the story of America since before its inception.

I grew up in a household where my mother wouldn’t let us use the words black or white to describe anything. She said those words were misused and led to lazy, dangerous thinking. I grew up at a time where one of the biggest songs of my childhood was Stevie Wonder and Paul McCartney’s “Ebony and Ivory,” which so brilliantly described the relationships between the keys on my piano, which at the time was decidedly my very best friend. I had taken for granted that the keys were colored differently for a reason, but that both colors were required to make the magical music that emerged from the big wooden box.

I was taught early on that Absalom Jones, my great-grandfather from several generations back, had been the first Black Episcopal priest. He had split with his friend Richard Allen, who formed the African Methodist Episcopal Church, on the grounds that we — and by “we” I mean those who have been designated colored, Negro, African, Black, etc. — deserved to occupy the same spaces any other person not so designated, and that if we left those spaces, those who would have us disappear would never be required to contend with our humanity. I come from a long line of people who felt compelled to hold the “rub” of occupying spaces that would seek to rub us out, and I admit that heritage still courses through each of my vessels, down to the very capillary.

In following this thread, I came to understand what the two melodies haunting me were trying to let me know. They allowed me to remember that being Black in America means that I have existed in a lot of relatively segregated spaces, like my summer camps or my father’s church. I have been afforded the opportunity to bask in an incredibly rich heritage of ingenuity, grace, humor, integrity, persistence, and an indefatigable awareness that “We shall overcome.” My father’s people raised cotton and sugar cane as sharecroppers, and then somehow managed to acquire the very land the family had worked as slaves. My mother’s people were free, and served as the first, second, and third Black postmasters of Society Hill, South Carolina. They included doctors, scholars, and even the architect that built the chapel at Duke University.

We were people who defied all the narratives I was taught about my Blackness in school, a space that was very “white” for me. I was often the only Black child in the “enrichment” programs or in the classical choirs or at piano recitals and competitions. I was so used to being the only one that I became masterful at turning off the parts of me that reminded my peers that I inhabited an entirely different world when they weren’t around. My home was where my roots ran deep, but when I left my home, I was, and to a large extent still am, an appeasing performer.

The first melody reminded me of home, of the refuge I found in Du Bois’ sorrow songs, of the light of my grandmother’s smile, and even of the expanse of the Milky Way that lit the dark sky in the cotton field where she still lived. The second melody was more complicated. It reminded me of the love I had for the friends who may never really know me because they had so little curiosity or access to the breadth of the other spaces I inhabited. It also reminded me of my lack of safety, and how those who would dismiss me or even hate me had a history of doing so with the violence of a rabid dog. That their appeasement could mean the difference between whether or not I was housed, educated, fed, employed, and, yes, even whether or not I would live. Hence, the coo of the lullaby tone was for both connection and survival.

These songs were bringing together two worlds that had been disparate for me, two worlds threatened by one another, and whose tension was threatening my fundamental self-Knowing. I know that I care for humanity. I know that I want us to survive. I know that we won’t do that if we don’t choose to learn how to live together with an eye fixed on the dignity of all.

What I didn’t know was who I was in the context of all the defining and despising. I realized that through my life in music, I had learned languages from all over the world, and that music could be fundamentally connective. I noticed, as I scrolled through the abandoned lyrics, that I had been collecting narratives from the fringes of the power mandala: the houseless, the refugees, the abused, the trauma kids, the queer folk, the rural poor, the religious, the humanists. I had made it a habit to see the unseen, and through that practice, I came to know myself as a seer, and eventually became clear enough (strong enough?) to turn the lens on myself.

That’s what Americana is: an album of narratives that might get left out in monolithic folk and Americana circles, but are American stories nonetheless. It’s me occupying space where I have felt largely uninvited; it’s me defining for myself that over which others have surreptitiously claimed sole ownership; it’s me reclaiming musical traditions that have informed all expressions of American music, while allowing the forms to exist as living, breathing organic expressions of time passing, rivers running, oceans swelling, mountains yielding. It’s a love letter to all the music that has moved me, all the people who have impacted me, and the hope that I still hold in my American heart. 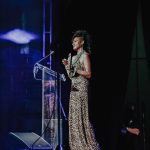