The desert has always fascinated rock musicians: both the American desert and the Australian one (aka “outback”). If the primordial essence of songwriting (like literature writing) resides primarily as a solitary act, in solo effort, therefore desert – the place where solitude multiplies infinitely beyond sight – it’s the perfect scenery.

Ernest Hemingway was right (quoting John Donne) when suggesting that “no man is an island” but also a statement like this one can get lost if placed among the ghostly echoes of the desert. So, the desert is the landscape of solitude, but at the same time it’s also the scenario were the intensity of the look must keep really concentrated not to get lost in the steady vastness of the horizon or in the indifference of nature.

In fact, Jesus Christ accepted and understood the real weight of his own sacrifice in a desert while (to switch directly to a atheist-derisory perspective) the Simón Del Desierto (by the maestro Luis Buñuel – Mexico, 1965) resists the temptations of the devil only until perching atop an eight-meter Stylites pillar in the middle of a South American desert. And talking about cinema, spanning from the explosive utopias of Zabriskie Point (Michelangelo Antonioni, Italy/USA, ’70) to the “rite of passage” of the nostalgic Fandango (Kevin Reynolds, USA, ’85), from the challenge to the authorities of Vanishing Point (Richard C. Sarafian, USA, ’71) to the melodramatic ménage a trios of The Misfits (John Huston, USA, ’61), from the angst of Paris, Texas (Wim Wenders, Rft/France/USA, ’84) to the post-industrial apocalypse of Mad Max (George Miller, Australia, ’79) there’s no director who didn’t describe the desert as the dusty line between abandonment and distance, as the stage for a long walk to the dark corner of human isolation.

The desert – and the “great loneliness”- starts to be the center of attention when a whole series of American and Australian bands (hurriedly defined roots to differentiate from the still prevailing new wave) bring to the limelight birthplaces like Tucson and Phoenix (Arizona), the Mojave area (California) or the Australian landscapes of Perth and the nearby desert regions. Howe Gelb’s Giant Sand (along with their side project The Band Of Blacky Ranchette) come from Tucson as Gelb’s intimate friend Rainer Ptacek, an excellent guitarist born in Berlin who moved to Tucson in the early 1970s. We should not forget classic-rock oriented Green On Red and hard/psychedelic Naked Prey that shared some members with the above mentioned bands.

From Davis (California) the Thin White Rope of Guy Kyser, from the remote Australian lands the Died Pretty and the Triffids. Each one of this bands, even though they all shared the vision of an “inner frontier” that had to deal both with wide open spaces and isolation, had a different approach to rock. The “American” Gelb and Kyser both had a post-punk background that leads them directly to a sound where the echo of seminal NY bands of the ‘70s is immediately recognizable.

In particular, Howe Gelb (whose band has an “extended family” connotation right from the beginning, starring from time to time his future wife Paula Jean Brown from Go Go’s, Chris Cacavas from Green On Red on his acid Hammond, Rainer Ptacek on slide, Van Christian from Naked Prey on drums) first spends some time under the moniker Giant Sandworms (a homage to Frank Herbert’s novel Dune [‘65]) and then debuts with a bunch of records that, even if not innovative under the songwriting perspective, merged the melancholic glares of the desert into epic rock ballads mixing Johnny Thunders, psychedelic rock and free-range country & western roots.

Giant Sands’ apparitions became herky-jerky starting in the early 90’s when Gelb (with the help of Joey Burns on bass and John Convertino on drums) began to releasing a series of works dominated by mood swings and by impromptu brainwaves of an inspiration that’s becoming more and more illegible and cryptic.

The rainy, rootsy, melancholy of Glum (’94), the distressing maturity reached with Chore Of Enchantment (’00) (initially refused by the label) and the gothy tribute Cover Magazine (’02) (an album of covers) are the best results by a Gelb who’s always trying to strike a balance between Neil Young and Leonard Cohen, tradition and new forms of expression, classic songwriting and instrumental improvisations. And his own solo career it’s even odder in terms of eclecticism: from gospel choirs to electronic music, from dry-as-dust folkie “field recordings” to indescribable acid trips, the artist treated himself to everything, turning sensations of desert life – the same life that in Giant Sand led to melancholic reflections on the so called “wrong side of the road” – into an unclassifiable (and sometimes messy) mixture (often recorded in a quality much lower than lo-fi).

Anyways, the gloomy Hisser (’98) and the heterogeneous Confluence (’01) still prove the ramshackle talent of a troubadour who is intent on revising the myths of the frontier from an uneasy and oblique perspective. On the other hand, the four albums released with Band Of Blacky Ranchette sound much more rational and traditionalist and feature a Gelb assorted in giving vent to all his love for the authentic old country of Hank Williams or Jimmy Rodgers. And the same can be said for the only exploit by OP8 (where Gelb, Burns and Convertino accompany Lisa Germano in a smoky collection of jazz, crooning and desert rock) and for the (disappointing) experiment Arizona Amp And Alternator: in the intentions a homage to old country masterpieces with Willie Nelson as a North Star and Grandaddy, Scout Niblett and M Ward collaborating but in reality an overtime catalogue of jazz riffs and roots blazes (and even a forgettable cover of Low Spark Of High Heeled Boys by Traffic).

Among all the path taken by Burns and Convertino (i.e. the best bass-drum groove of the last thirty years) there’s the one of Friends Of Dean Martinez (originally “Friends of Dean Martin”, but they switched to Spanish to avoid legal implications), a great band started from Bill Elms with Van Christian e Tom Larkins (from Naked Prey): the debut (The Shadow Of Your Smile, ’95) is a sweet concentrate of visions, country intimacy and bluesy melancholies that puts into concrete the desolation of the desert trough the “expanded” steel played by Elms on Santo & Johnny (as Daniel Lanois will do on his solo career), thanks to the reso-phonic strokes of Duane Eddy and to the sad country-blues coming from the lost age of the 78 rpm.

After some minor works, Friends Of Dean Martinez will come back in great shape with the last records, true snapshots of the most secret and esoteric spots of the desert where the sunset draw the profile of a long gone era, among echoes of Ennio Morricone and suffocating down-home melancholies. It’s the same path covered by Burns and Convertino (even though they use a more “European” point of view) with Calexico: the duo rediscovers Hispanic-American roots with a formal language that’s astonishing and elegant at the same time.

The first three albums by the band (and the many other works released on their web site) are basically galleries where the slow-core folk of the new American traditionalists meets western epic, where the romantic loser-western portrayed by Bob Dylan comes across the European intellectualism of Rainer Werner Fassbinder, where the violins of a Mariachi orchestra dance in Balkan polkas, the tango from Argentina goes along with the Cuban bolero, the night-club music encounters jazz and Nino Rota finds tex-mex.

Everything’s perfect, mainly thanks to the incredible background of the duo (that in more than one occasion reminds me of the baroque intellectualism of Simon Jeffes from Penguin Café Orchestra) and to the decision to keep intuitions inside the borders of the frame, making conciseness a virtue and using quiet brushstrokes to paint a noir and desolated microcosms.

But the most extraordinary product of the whole scene it’s also the most unknown: Rainer Patacek was born in Berlin and had Polish origins, he later moved to Tucson in the late ‘70s forming Giant Sandworms with his friend Howe Gelb.

Slide and dobro maestro, repository of a unique and bluesy style, capable of reviving the archaic spirit of Bukka White and Son House with just the help of his reso-phonic National Steel, Rainer Ptacek must be remembered not only for his frisky rockabilly déjà-vu performed with the so called Das Combo, but mainly for Worried Spirits (’92) and Nocturnes (’95): two blues gems, one of the best example of blues in the nineties, lyric, harrowing and definitive like only a few other artist of the period could sound.

Sadly, he died in 1998 at only 46 due to a brain tumor: his legacy consists in a large amount of live recordings and unreleased stuff of great interest but he will surely be remembered for these two albums, dense with intense, minimalist blues and a folkie fingerpickin’ driven by echoes of Ry Cooder, Blind Willi Johnson and a lot of disheveled soul (listen to his cover of Pastime Paradise by Steve Wonder on Alpaca Lips [‘00]). 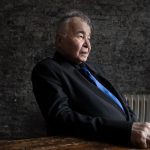