With their first official full-length, this unlikely duo from Detroit makes a bold statement, one that finds them coming a long way from their DIY beginnings. They’re still as confounding as ever, thanks to a sound that’s best described as… well, indescribable. It’s a strange mix, fastidious pop driven by vigorous rhythms, scattershot arrangements and a dreamy, shimmering musical tapestry. Most of the songs meander nonchalantly, and even when they reluctantly coalescent — most notably on “Vocal Chords” and the title track and — the results are both ebullient and effusive. Nevertheless, even the most overt attempt to replicate more perfunctory pop — the soulful “Almost Lost Detroit,” the lush, melodious “The Fisherman” – seems suspiciously askew.

Then again, any band that takes its moniker from a renowned racecar driver can’t be expected to conform to convention. The fluttery effects that erupt from the otherwise inexplicable “An Ugly Person On A Movie Screen” and the shrill whistles that mesh with the instrumentation on “Skeletons” and “Simple Girl” seem somewhat unnerving on an initial encounter.  All of which confirms the fact that Dale Ernhardt Jr. Jr. are an unusual act, one reason why they’ve already earned the distinction of being one of the year’s most notable new arrivals. – Lee Zimmerman 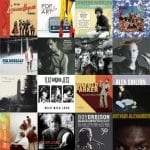