Very exciting music week last week, for sure. Topped off by the complete joy that is seeing Mr. Kris Kristofferson play live. If you’ve been introduced to me, you already know that he is my favorite. Always has been. So it was that I went off to the Greek Theater with my fellow Kris lover, Sweet D, for our third KK show together (!), this time in an evening with both Kris and Merle Haggard playing together. To a crowd of obvious disciples, so it was like a big honky tonk party the whole time.

A party that we were late to, because traffic in L.A. is ridiculous always, but especially on a Friday of a long weekend. We finally got there and all squared away just in time to hear the opening chords of “Me and Bobby McGee”! We were thrilled, more so as we walked down and down and down to our very excellent seats that let us see every cool expression that crossed the legends’ faces the entire night. Kris sang, “Good enough for me … and Janis” in a shout-out to his dearly departed friend who made that song famous. The audience was rowdy, and more than into it, calling out requests, hooting and hollering when their favorites were played, and laughing at every quip out of Kris and Merle’s mouths. They pretty much alternated their songs, but sang together on them all, backed up by Merle’s backing band, The Strangers. “This next one’s for all the drunks in the crowd”, {Hoots! Hollers!} said Merle to introduce, “Tonight The Bottle Let Me Down”. Though the voices have grown a little shakier, and the playing a little creakier, and they use teleprompters for the lyrics these days, these old friends were clearly having the time of their lives playing together again, and thus, so were all of us listening.

It was classic after classic all night, with each song getting its due yells from the superfans. Merle – “Silver Wings”. Kris – “Loving Her Was Easier” (a favorite of mine – I won’t lie – there were tears). Then a cover of their mutual friend, Johnny Cash’s “Folsom Prison Blues” that had people up and dancing and raising their glasses in the air. Merle and Kris were cracking each other up all night, and we laughed along with them. “I remember when women would cook and chop wood”, said Merle. I bet he does too. 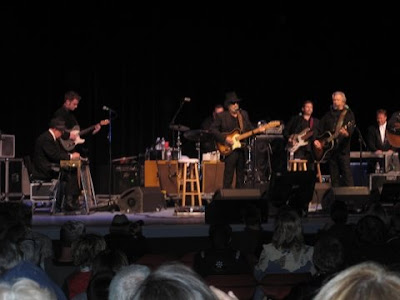 Kris – “Here Comes That Rainbow Again”. Sigh. And “For all the working men”, Merle played his “Working Man Blues”. Very timely considering the lack of jobs right now, and the entire country mobilizing to protest our corrupt banks and corporations. People sang along with gusto, and deservedly. Ahhh, “Sing Me Back Home” from Kris, which had Sweet D and I elbowing each other at how for real absolutely dreamY that Kristofferson still is. The best.

“The most fantastic thing about a show with me and Kris is that we’re both out of jail at the same time … or the hospital”, wise-cracked Merle, before launching into his “30 Again”. It made us kind of sad to hear these guys singing about their hey-days so wistfully, but also served as a reminder to live it UP while you can, man. 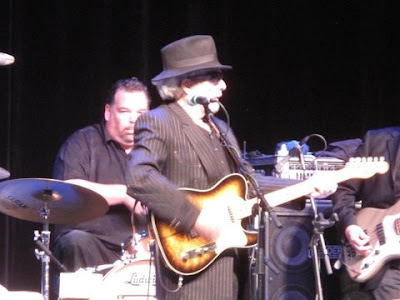 There is such clear mutual affection between these guys, that you just loved them both. I never really got into Merle before (saw him open for Bob Dylan a few years ago and kind of shrugged about it after), but now I’m a fan. He’s funny and sweet and talented and yeah, I get it now. 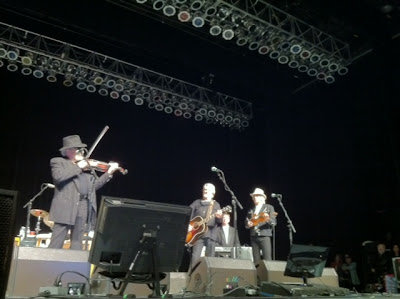 “This one’s for my kids … and their Mamas”, said Kris to begin another favorite, “From Here To Forever”. Just lovely. There was a little old man in The Strangers that stood up to play his lap steel guitar during this one, which was kind of precious. As a retort to Kris, Merle introduced his next one by saying, “I wrote this one for MY Mama”, bending Kris over laughing. “Mama Tried” was another party song that everyone knew and sang along with. Then Kris’s great, “The Pilgrim”. I’m trying to keep the gushing to a minimum, but Come ON with this man! Merle picked up his fiddle (that he rules at) for “Working In Tennessee”, a story about losing his guitar in the Nashville floods. That’s the thing with these great singer/songwriters – they’re telling actual STORIES, not just cobbling together random words and beats. You can picture everything happening as you go along with them through their tales. I love it. 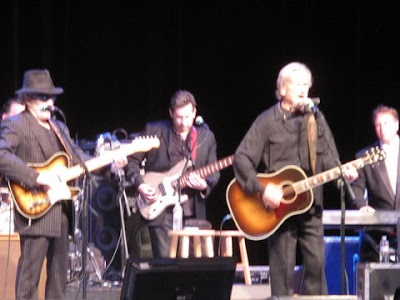 “You notice how good it smells in this hall?”, said Kris as there was a pervasive, unmistakable wafting of weed over the proceedings throughout the chill, autumn night in the hills. That was perfect timing for “Sunday Morning Coming Down” and when he got to the part where he sings, “Wishing, Lord, that I was stoned …”, Kris smiled and nodded to the crowd, prompting a guy in the front row to blow so much smoke towards the band that I thought it was a smoke machine. The whole place laughed, and it looked like Kris and Merle breathed a little deeper on that tune. 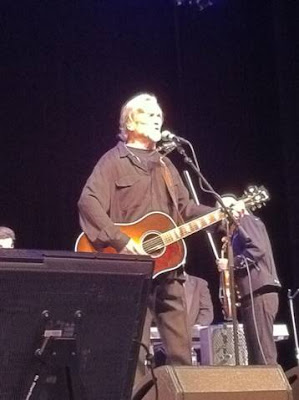 “I was the only one who knew the words, and it had to be written”, said Merle in reference to his hit,”Okie From Muskogee”. It was Merle’s BIG crowd pleaser, especially when HE got to the line, “We don’t smoke marijuana …” where he stopped and said, “In the old days you would never hear the WORD marijuana on a microphone”, to which the front row guy responded with another giant cloud of smoke. “We got drunk like God wants us to do” … earned more yells and a toast in unison from the whole place. As I mentioned at the outset, it was a party.

For the last song of the night (as there was no encore, sadly), Kris and Merle harmonized beautifully on “Why Me?” Hear:

Why me Lord, what have I ever done
To deserve even one
Of the pleasures I’ve known
Tell me Lord, what did I ever do
That was worth loving You
Or the kindness You’ve shown

… And try to come up with someone who just nails it lyrically every time like Kris Kristofferson does. Not easy. He is an American Treasure. I keep waiting for that Kristofferson autobiography, as you just know it will be the most interesting, riveting read ever. For real. 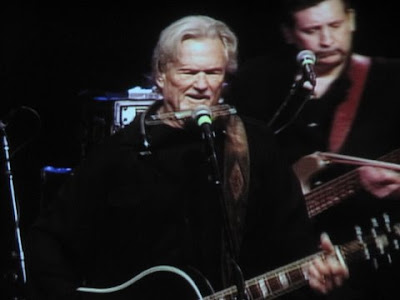 They took their bows to raucous cheering. “God Bless! What a great crowd!”, said Kris before departing the stage, and he was right. This was a party crowd, and an appreciative one as well. We yelled for more, but it was not to be this time.

Lights up, stars out, a glorious night indeed. Though we didn’t hear it this time, this night will most certainly be added in “For The Good Times”.

Narrative Arc with a Haggard Twang